Accessibility links
Bounding, Rebounding: Panthers Make A Comeback By 1995, there were only about 25 Florida panthers remaining in the wild. A breeding program and careful monitoring have helped restore the population's health. But the big cats aren't out of the woods yet. 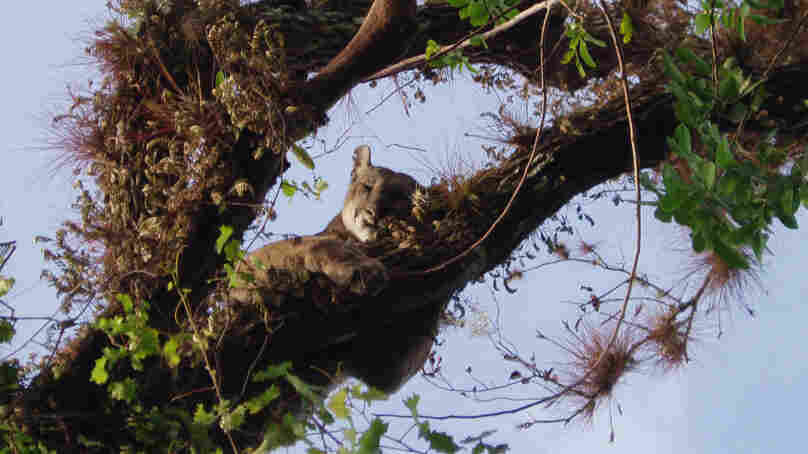 A male Florida panther in his perch in an oak tree. The population of panthers was down to a dangerously low number of 25 in 1995, but a breeding program has helped increase that number to near 100. Science/AAAS hide caption 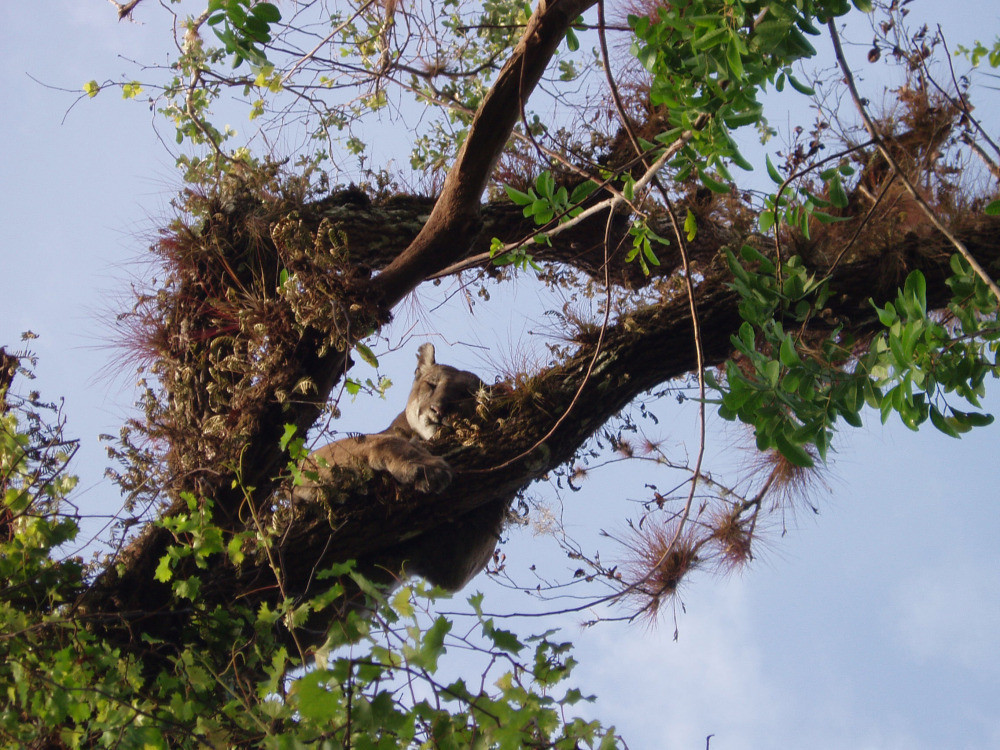 A male Florida panther in his perch in an oak tree. The population of panthers was down to a dangerously low number of 25 in 1995, but a breeding program has helped increase that number to near 100.

Big, meat-eating animals are in trouble. At least if they're not human.

They eat what we like to eat. Sometimes they eat us, so we kill them. Or pave their habitats. This is especially true of the big cats: lions in Africa, tigers in Asia and Russia, and big cats in the Americas.

But one group -- the Florida panther -- is making a comeback.

Florida panthers are the same species as the Western puma, also known as the cougar or the mountain lion. But the panthers have adapted to living in the Florida swamps.

We were actually watching the extinction process right in front of our eyes.

By 1995, there were only about 25 Florida panthers left. And Melody Roelke, a veterinarian who has tracked them for years, says they were a mess: suffering from heart disease, infertility and undescended testicles.

"[With] the males, even with one testis, the quality of that sperm was just abysmal," she says. They just couldn't reproduce. "We were actually watching the extinction process right in front of our eyes. And this is what happens with small populations and inbreeding of close relatives."

Roelke waded through swamps and dodged rattlesnakes to follow panthers. But in Florida, the cats looked hopeless. "It was devastating -- in fact so devastating that I decided to move to Africa because the battle was over," she says.

But a geneticist who studies big carnivores, Stephen O'Brien of the National Cancer Institute, devised a plan to save the panthers: He combined genetics and math to calculate the panther's fate. 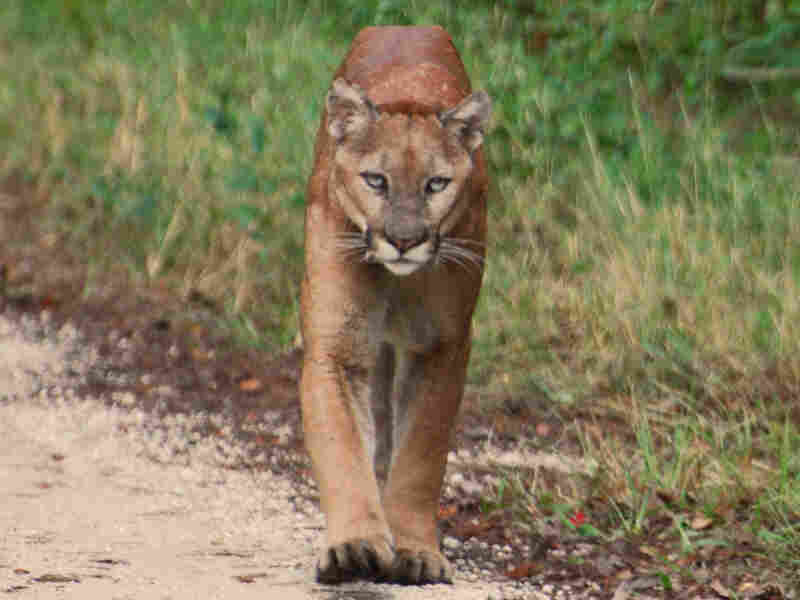 A male Florida panther walks down Jane's Scenic Drive in Fakahatchee Strand Preserve State Park. Before scientists bred the Florida panthers with cats from Texas, they lacked vitality and were near extinction. Science/AAAS hide caption 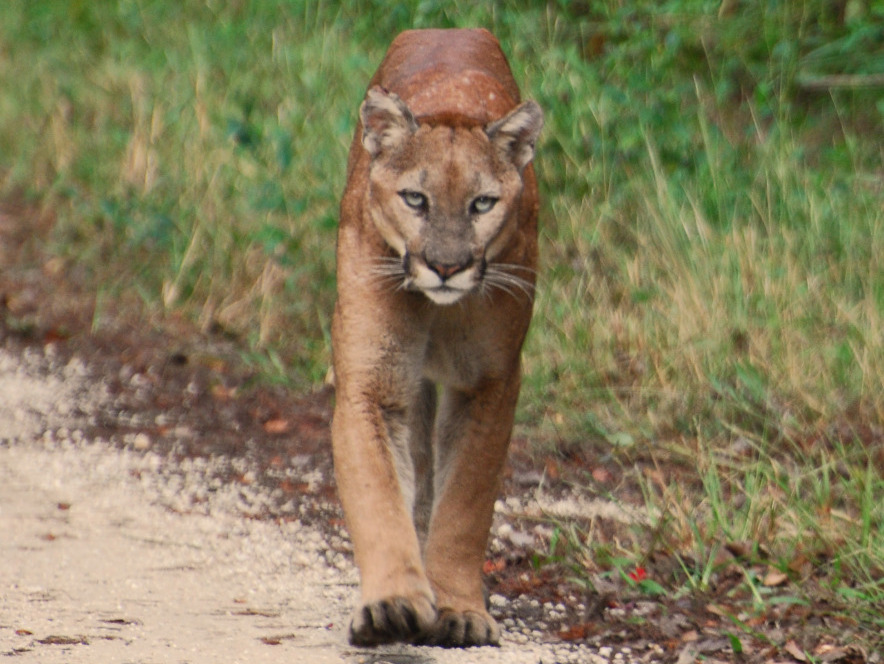 A male Florida panther walks down Jane's Scenic Drive in Fakahatchee Strand Preserve State Park. Before scientists bred the Florida panthers with cats from Texas, they lacked vitality and were near extinction.

"They were going to go extinct in 25 years with a 99 percent probability if we left them alone," he says. "That's what stimulated the decision to act, to intervene."

He helped persuade the federal government to capture eight female pumas in Texas and release them in Florida to mate with the panthers.

That was a controversial move. The Endangered Species Act advises against mixing subspecies (here, for example, pumas and panthers). But O'Brien argued that Eastern and Western pumas had been interbreeding for millennia before highways and housing developments intervened: This would not be a "man-made" creature.

Others said, "Why bother?" -- there were enough pumas out West. O'Brien countered that subspecies may have traits developed within their isolated habitat that make them special. Even Darwin, he says, believed that subspecies could, under the right circumstances, become a unique species someday.

So the Texas cats came to Florida. And to see whether the plan was working, scientists tracked every panther, as well its offspring. Roelke came back from Africa -- now sporting a cheetah scar on her leg -- and signed on with the National Cancer Institute group. She led teams of cat-tracking dogs into the cypress swamps.

"[The dogs] get within less than half a mile of where the cats are, and then the scent is so strong, the dogs are so excited they just let loose and they bay and they start running," she says. "The cat then typically will run and jump up a tree."

A marksman then shoots the cat with a dart full of anesthetic. "Then we have a very brave field person who actually climbs up the tree with the cat semi-awake and puts a harness, a rope around their chest, and then we lower them into a net."

The population [of panthers] increased in number threefold. The admixture cats, which are hybrids, are more robust and they look a little bit like Arnold Schwarzenegger versions of cats.

Scientists then take blood and tissue samples as well as DNA from the panther to monitor its health and reproductive viability.

Before the Texas females arrived, the Florida panthers were, according to Roelke, pretty lame. "They would be lying there in the tree like, 'Oh, just let me just die up here,' because they lacked any kind of vigor."

Now, 15 years later, O'Brien says the Florida panther is a new cat. "I think we can say cautiously that it was the right decision," he says. "The population increased in number threefold. The admixture cats, which are hybrids, are more robust and they look a little bit like Arnold Schwarzenegger versions of cats."

Writing in the journal Science, O'Brien says the animals' DNA shows that the hybrids are the healthiest of the litter.

Craig Packer, an ecologist at the University of Minnesota who has worked with lions in Africa, says the project is a textbook case of how dangerous inbreeding can be, even in wild animals.

"The importance of this study is to really emphasize not only that this population really did suffer substantial costs of inbreeding, but that it was relatively easy to resolve by bringing in a small number of new animals to the population," he says.

Packer says introducing new genes raises the chances that an isolated group can resist novel diseases or genetic defects. He says it could help keep other big cats -- tigers in Asia and Russia and lions in Africa -- from going extinct.

He says insisting on genetic purity for a subspecies is akin to "stamp collecting." As important as keeping rare species from disappearing, he says, is keeping ecosystems -- including its top predators -- reasonably intact. Creating a hybrid in Florida is a "compromise," Parker says, that restores the ecosystem to something like its natural state.

But few groups of wild animals are like the Florida panthers.

"It was a well-studied population prior to the introduction, and then the follow-up was obviously well-studied after," says Warren Johnson, one of the National Cancer Institute team members. He says knowing the genetics of the Eastern and Western groups helped determine whether the experiment might work. Results now help to assess whether the animals are getting genetically more robust and more physically fit.

"A lot of people don't want to have cougars in their backyard when they're raising their kids and their little dogs," says O'Brien, "and I think that this is a reasonable fear." That's one of the reasons the Florida panther almost went extinct.

O'Brien says the solution is to find new habitats for the rejuvenated panthers. And he's talking with wildlife officials in Eastern states to find one.