Accessibility links
Biologist Tracks Walruses Forced Ashore As Ice Melts The Arctic ice that thousands of walruses usually live on has disappeared from Alaska's Chukchi Sea. The government is trying to figure out how the animals are coping with the dramatic change and whether to add them to its endangered species list. 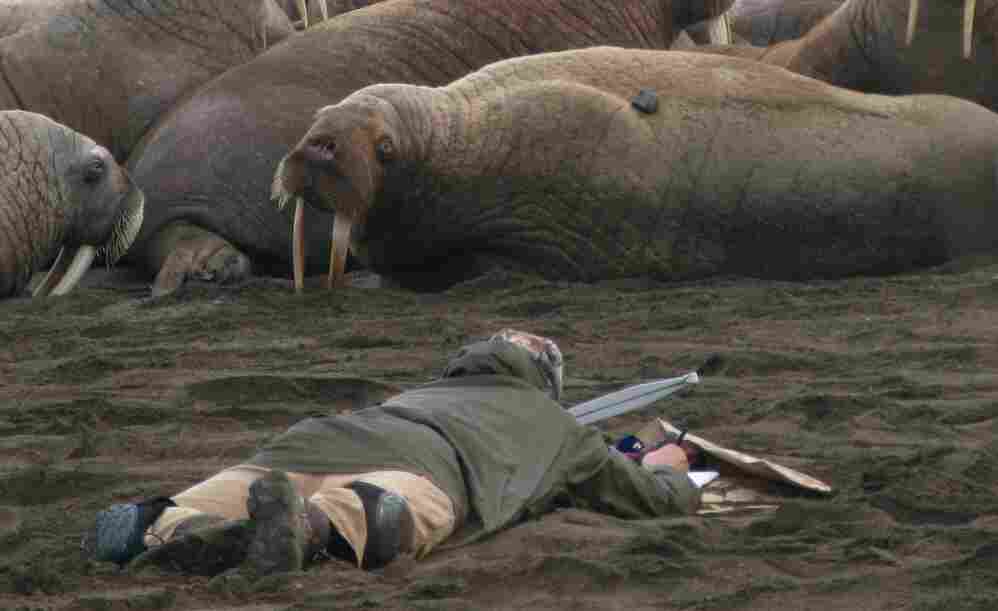 Earlier this month, tens of thousands of walruses crowded onto a sandy stretch of beach on Alaska's northwest coast. The animals were forced to swim to shore after the Arctic Sea ice they usually live on disappeared from the Chukchi Sea.

It's a phenomenon that was unheard of five years ago. Anthony Fischbach, a wildlife biologist with the U.S. Geological Survey, is trying to get a handle on what the dramatic change in behavior could mean for the species long-term.

On a recent foggy evening, Fischbach -- dressed in camouflage to blend into the greenish-brown landscape -- creeps toward the animals to record them.

Several thousand walruses are on the beach, packed shoulder to shoulder. Fischbach calls it a "wall of walrus."

"I'm surprised by one thing," he says. "Essentially all the animals here are adult females." You'd expect to see about one in three with newborn yearling calves, he says.

The vast majority of walruses in the Chukchi each summer are females who fatten up on clams that populate the seafloor. They need a lot of protein to nurse their young. This time of year, they should be foraging from the sea ice floating over the productive waters of the continental shelf. Instead, they're stuck on land.

"I only see a small number of yearling calves," Fischbach says. "That makes me wonder what's happening with the calves."

Fischbach suspects that walrus moms have a harder time keeping track of their pups once the sea ice disappears. Feeding the pups is also more difficult. From land, more animals have to compete for fewer resources that are farther away. Fischbach has been attaching satellite radio tags on the walruses to try to figure out how the animals are coping.

The tag, which he deploys with a crossbow, is a hockey puck-sized transmitter that embeds into the thick walrus skin. Back in his Anchorage office, Fischbach can download hourly updates on the animals, which he calls "walrus diaries."

"It's a simple diary: I rested; I got in the water; I fed. And then it all gets repeated in various combinations," he says.

But that basic information is key to helping biologists figure out how walruses are coping with the dramatic changes in the Arctic Ocean.

The information is especially important as the U.S. Fish and Wildlife Service decides whether the species needs protection under the Endangered Species Act.

"I think it's a tough one because walruses are different than, say, polar bears, in that polar bears have a real tough time when they're onshore, but walruses are able to come to shore for periods of time and still make a living," says Chad Jay, a biologist with the U.S. Geological Survey. "Although they could be stressed."

The question is whether that stress will be substantial enough to threaten the animals with extinction. The U.S. Fish and Wildlife Service expects to make a decision on whether to list the walrus in January.