Accessibility links
Facebook CEO's Gift: Image Control Or Philanthropy? Some industry insiders question the timing of Mark Zuckerberg's $100 million donation to public schools in Newark, N.J. It was announced just ahead of the opening of an unflattering film about the tech wunderkind's rapid rise. 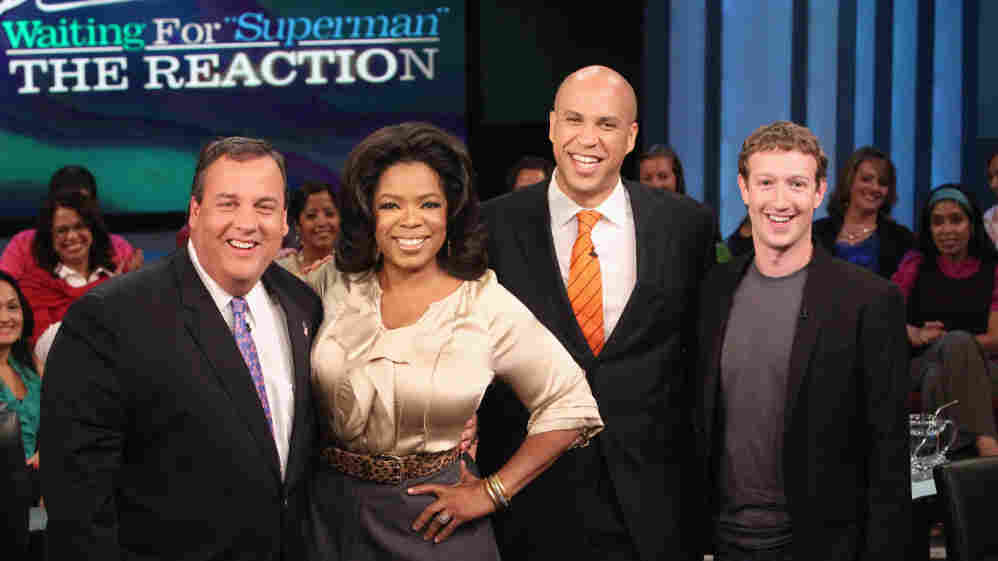 Facebook founder and CEO Mark Zuckerberg appeared on the The Oprah Winfrey Show on Friday to announce a $100 million donation to public schools in Newark, N.J. But the timing of the gift has raised questions about the social networking wunderkind's motivation.

Joined on the program by New Jersey Gov. Chris Christie and Newark Mayor Cory Booker, the 26-year-old tech billionaire said he decided to give the massive donation to the troubled school system "because I believe in these guys."

Mark sees himself as a Bill Gates type. He has a hacker mentality — he wants to take on the establishment and he wants to make a difference.

Ben Mezrich, author of "The Accidental Billionaires: The Founding of Facebook"

"Why education? Because every child deserves a good education, and right now that's not happening," Zuckerberg said, adding that he wants other children to have the same opportunities he had. He graduated from Phillips Exeter Academy in New Hampshire in 2002 and attended Harvard before dropping out to work full time on Facebook.

The Newark district, which has about 40,000 students and a $940 million annual budget, has struggled with crumbling schools, low test scores and graduation rates -- problems that Zuckerberg hopes his gift can help turn around.

But Friday's announcement — coming just ahead of the opening of The Social Network, an unflattering film about Zuckerberg's rapid rise — has some tech industry experts wondering if it's more about heartfelt philanthropy or image control.

Author Ben Mezrich, whose book The Accidental Billionaires: The Founding of Facebook is the basis for the new film, falls into the "heartfelt" camp.

Mezrich said that announcing the gift on the same day the movie premieres is "awkward," but nonetheless he thinks Zuckerberg's huge donation is sincere.

Is $100M Gift Enough To Save Newark Schools?

Is $100M Gift Enough To Save Newark Schools?

"From my research, Mark sees himself as a Bill Gates type," Mezrich told NPR. "He has a hacker mentality -- he wants to take on the establishment and he wants to make a difference."

Launched in 2004 from Zuckerberg's college dorm, Facebook has grown into the world's largest social networking site, with more than 500 million users worldwide. Zuckerberg's net worth also has grown steadily, ringing in at an estimated $7 billion.

While Facebook has enjoyed nothing short of phenomenal growth, it hasn't come without a few glitches. Just this week, the site was hit by two major outages in as many days, and it also has been plagued by periodic privacy concerns.

Scott Piergrossi, vice president of creative development at the Brand Institute, agrees with the Bill Gates comparison. Zuckerberg, he said, is the young geek who makes a billion but then unwittingly becomes a target when the technology fails to match up to expectations.

"Zuckerberg is the capitalist role model for this generation, and this gift puts him on a different level," Piergrossi said, adding, "This is not something you expect to see from Generation X."

Zuckerberg's donation follows $290 million in education grants from the Bill and Melinda Gates Foundation in November. Gates has encouraged others to follow his philanthropic lead, calling on the nation’s billionaires to pledge to give at least half of their net worth to charity during their lifetimes or at death.

"This is clearly a [public relations] stunt," Frankel said. "He wants to have a philanthropic track record to counter his portrayal in the film."

Carla Stanmyre McDonald, CEO of Dynabrand, a public relations firm that serves the technology sector, said Zuckerberg probably was motivated in equal measure by altruism and a need to burnish his image. Regardless, she said, the Facebook founder "has been handed an opportunity to be his generation's 'owner' of education philanthropy."

"The best thing he can do for his image is to use that leadership role to define the 'Mark Zuckerberg' brand," she said.

Until recently, Zuckerberg has been the proverbial "man behind the curtain," pulling the levers of Facebook but hardly a household name himself.

Mezrich thinks that's about to change.

"I think after this movie, everyone will know who Mark Zuckerberg is," he said.

Material from The Associated Press was used in this story