Accessibility links
An Author's Path To Success: Quitting Your Day Job Sonny Brewer did everything from selling cars to singing in a honky-tonk band before he became a novelist — and it turns out, he's not the only one. In Brewer's latest project, Don't Quit Your Day Job, authors write about how they made ends meet before pursuing their literary dreams. 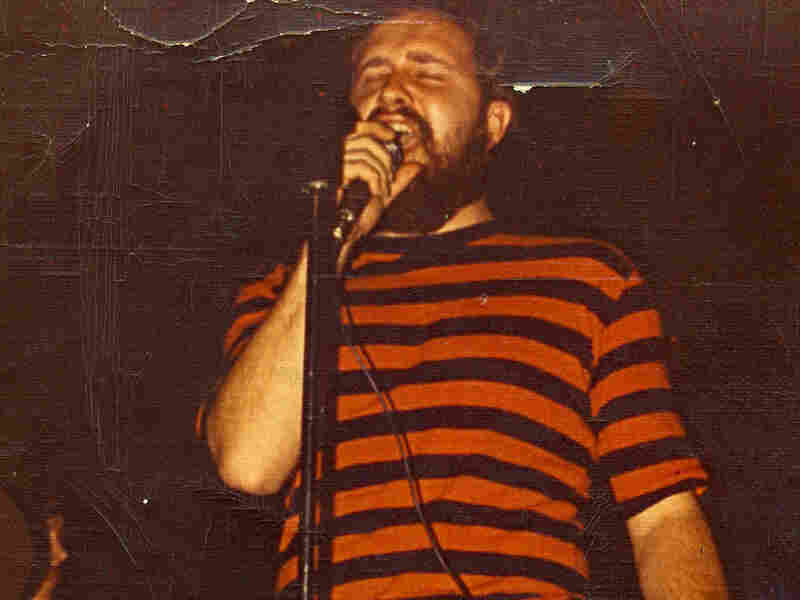 Sonny Brewer sang in a honky-tonk band six nights a week before going on to write The Widow and the Tree. hide caption 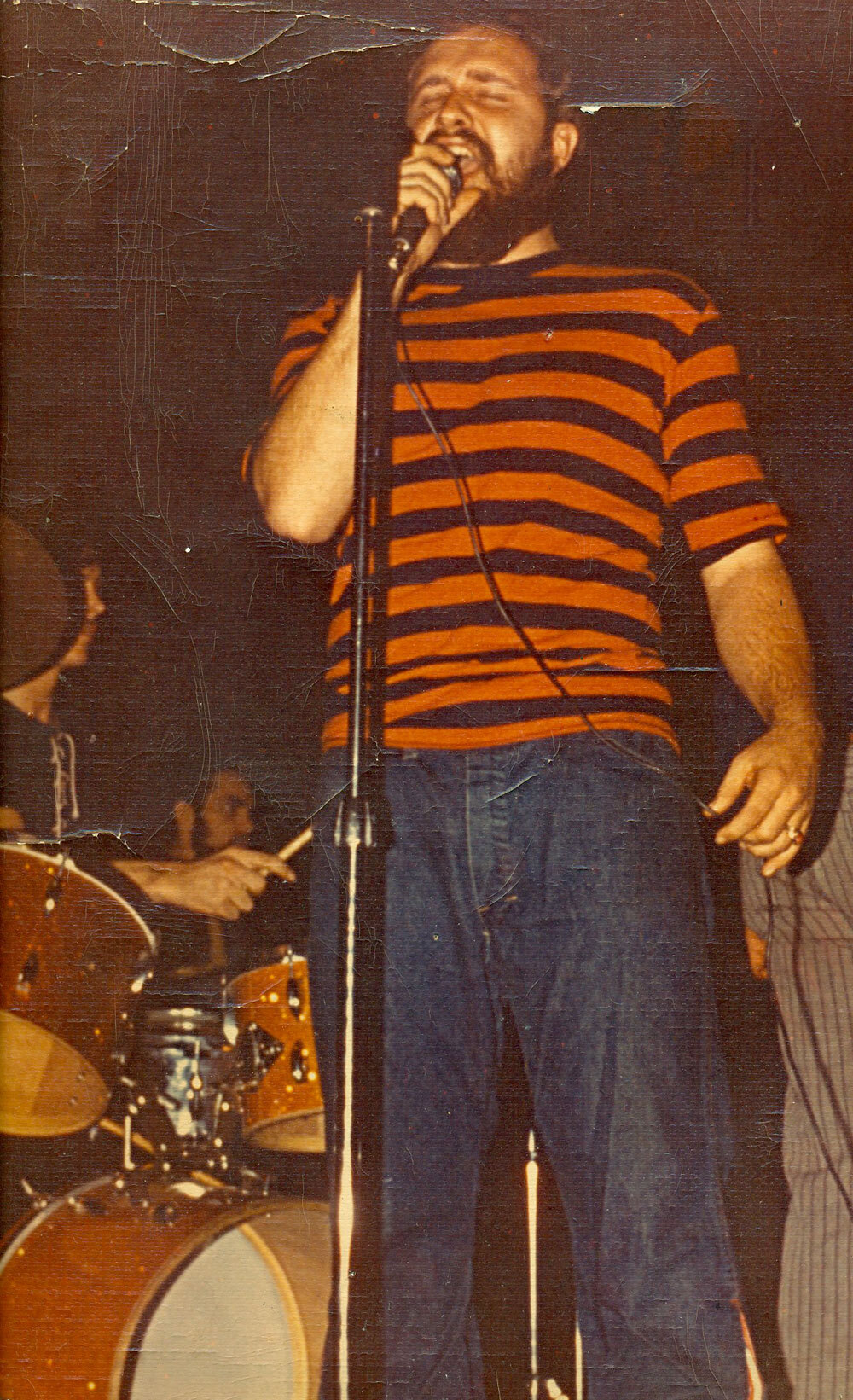 Sonny Brewer sang in a honky-tonk band six nights a week before going on to write The Widow and the Tree.

Before he became a writer, Sonny Brewer held the position of chief chicken fryer at Woody’s Drive-In in Millport, Ala.

He followed that up with a stint in the Navy, then as singer in a honky-tonk band. Brewer has also worked as a car salesman, a construction worker and a coffee house manager -- but in his spare time, he was always writing.

One day, Brewer finally quit his day job. That was four novels ago. Brewer made it as a writer, but he never forgot his earlier jobs -- and he figured other successful writers didn’t either, which is how his latest project was born.

Don't Quit Your Day Job is an anthology of 23 southern writers reminiscing about former jobs. Brewer tells NPR's Mary Louise Kelly about how he recruited writers for the project. 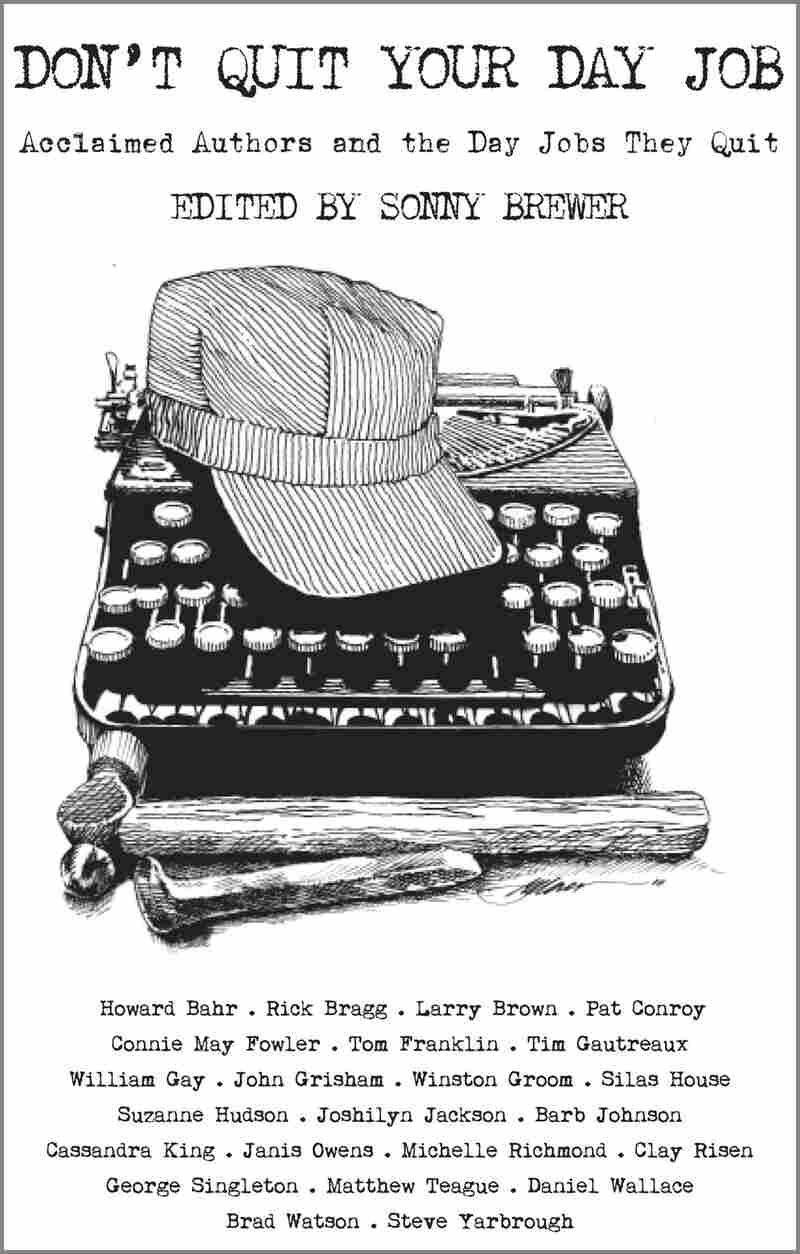 "I said to William [Gay], 'Would you write about hanging sheet rock in the hills of Tennessee, before you were what Stephen King referred to as an American Treasure?'" Brewer recounts. "And he said, ‘No, I’ll write about working at the pinball factory, though.'"

Appalachian Writer of the Year Silas House agreed to write about his time as a mailman; author George Singleton shared his experience as a garbage truck driver; and Winston Groom, of Forrest Gump fame, wrote about being an Army officer in Vietnam.

Groom tells Kelly that the novelty of Brewer's project was what initially made him want to be a part of it.

"I [had never] thought about anything like that," he says. "But you are what you do. I think that … experience in life is informed by all the things that you do, and work is most of it."

Groom says he had never realized how many different jobs he had held -- and what he had gotten out of them -- until he started looking back. His first job as a newsboy taught him he wasn't an early riser; his work in construction taught him he didn't like hard, manual labor; and the Army gave him enough experience to write a book about -- his first novel, in fact, Better Times Than These.

"And that’s what got me out of the newspaper racket," says Groom, who had ended up a reporter at the now-defunct Washington Star. "That book launched my career. That was 30 years ago, and I haven’t worked a day since.” 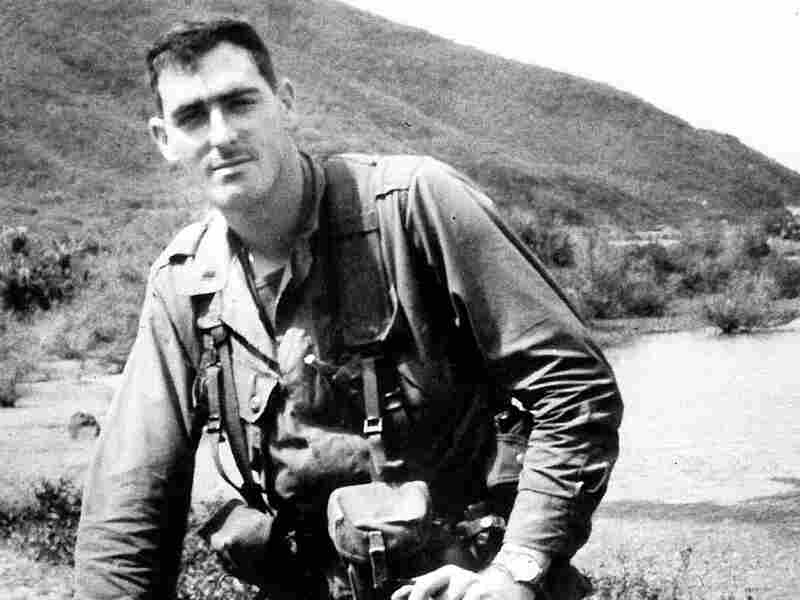 Winston Groom served in Vietnam from 1966 to 1967 before writing Forrest Gump. hide caption 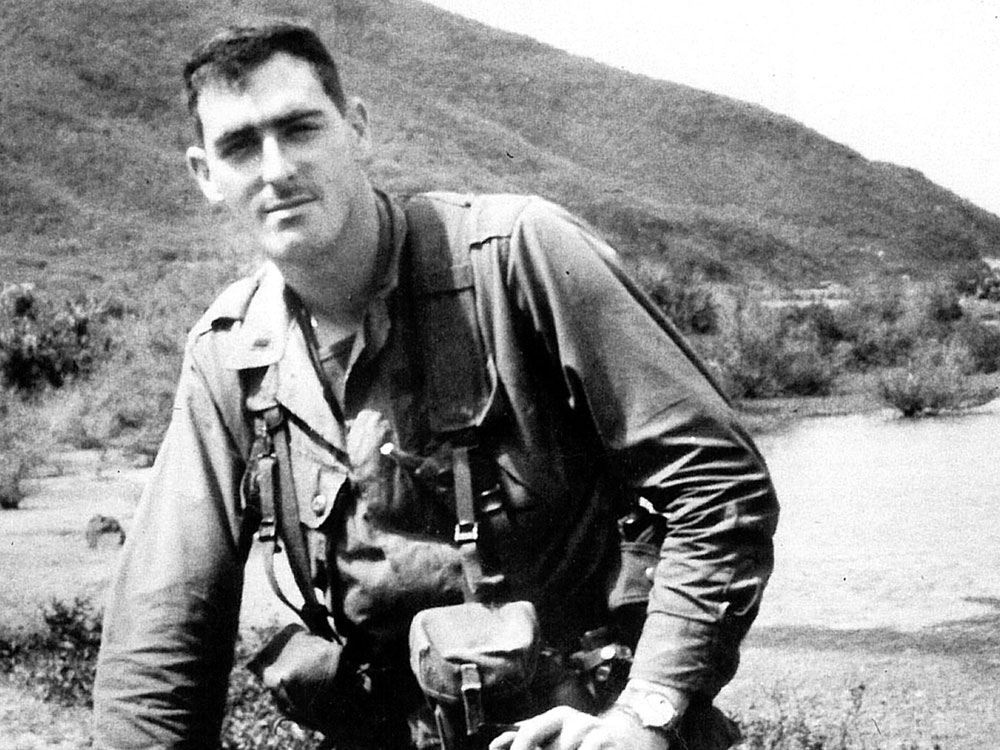 Winston Groom served in Vietnam from 1966 to 1967 before writing Forrest Gump.

Groom says that while the old adage "Write what you know" proved good advice for his literary debut, it shouldn't always be taken as a rule. After all, his book Only was written entirely from the point of view of an orphaned Old English sheepdog, and it's not like the sheepdog can correct him. (Though Groom insists the dog loved the book.)

"Truman Capote just said, 'Write something true,'" Brewer says. "It doesn’t matter if it fits in the book or not, but if it’s true that the wind is blowing and that the sky is blue … write the truth for a minute."

I had a bunch of jobs before I discovered you could make money writing books and not actually have to work for a living. I think I learned something from all of them.

My first job was a newspaper boy at age twelve. From this I learned I did not like to get up early in the morning.

My next job was as a summer construction worker at age sixteen. First day I walked into the office and this guy said, “Are you scared of heights?”

I didn’t know, because I’d never been really high up, so I said no.

He drove us to a building in downtown Mobile and told the black guy to wait outside in a parking lot. He took a great big coil of rope out of the back of his truck and slung it over his shoulder. Then we got inside an elevator and went to the top of the building -- eight stories. We climbed some stairs to the roof and he went over on the side to where there was some scaffolding and said, “This belongs to us. We got to take it down.”

I didn’t know what he was talking about, but he stepped out on the scaffolding and undid a piece of scaffold pipe, tied it on the rope, and began to lower it to the ground, eight stories below. Down there was the black guy, who was supposed to fetch it, untie it from the rope and put it on the truck. He was so far down he looked like he was barely an inch tall.

“He’s got the worst job,” the guy says. “One of these pieces is apt to fall on him.”

Well, I climbed out on the scaffolding, which was very shaky, and was hanging on for dear life. The wind was blowing and we were so high up I could see ships way out in the harbor.

“Turn loose of that scaffolding and take off that pipe,” he said, “and tie it on this rope.”

It was like dismantling a big erector set with yourself inside it. Or making up a bed while you’re still lying in it.

Anyway, we took apart scaffolding most of the day until the pickup truck was full. The guy said he don’t do any more than one pickup load a day because it is “kind of hard on the nerves.” So we knocked off and drove to a site where we pickaxed hard clay to put in curb footings.

We made about a half-­story a day taking down the scaffolding; it took two weeks.

From this job I learned that if anybody asks if I’m scared of heights, say yes.

My next summer job was encyclopedia salesman. I had just graduated from high school, and there was an ad in the paper that said, “Make loads of money, easy work, good hours, no labor involved, meet interesting people” -- or something to that effect.

I went to the motel room where the ad said go, and there was this thin guy with slicked-­back hair in a cheap suit and a pencil mustache, who told me to go on inside. There were about thirty people in the room. Before we even got started, one guy asked, “Say, is this about selling encyclopedias?”

And the slicked-­back guy in the cheap suit answered, “No, we don’t sell anything here. We place them in homes.” The guy that asked the question just got up and walked out.

I should have followed him.

First, I found out we had to put up a $100 deposit, and then he showed us how to “place” encyclopedias in people’s homes: “You go into neighborhoods and look for yards with children’s toys. You never work on weekends, because that is when the men are home. You do NOT want to talk to the men.”

This slicked-­back guy could sell damn near anything. We’d been at it about a week and I had no sales, so he says, “You come with me today, I’ll show you how it’s done.” He drove a yellow Buick convertible.

We went to this really poor-­looking house that needed paint and the only toy was an old tire hanging on a rope from a limb. A woman came to the door and you could hear kids crying in the back. Before I knew it, old slick had talked his way in, and we were sitting on the couch. He started his spiel. When he laid out the encyclopedia pitch she said, “Wait a minute -- is this about encyclopedias?”

Slick said, “Yes -- the finest encyclopedia in the world!”

And she said, “Well, look over there” and pointed to a bookcase filled with encyclopedias. “That was last year,” she said. “They talked me into buying the entire Encyclopedia Britannica. I’m still paying for it -- and don’t nobody ever even use it.”

“Well,” Slick said, “that’s your problem. That encyclopedia is no good for kids -- it’s too smart for ’em. It’s for college kids. What you got to have is our encyclopedia,” and he went on about how great it was for kids.

I looked out the window at her kids playing in the yard, and from what I could see, those kids needed clothes, not some damn encyclopedia. But after an hour or two of Slick browbeating her, the woman agreed to buy our encyclopedia for about $1,000 that she could not afford, I was sure.

When we got into the car, Slick said, “I bet that gal knows how to have a good time. I’m gonna phone her back this afternoon and find out.”

I did not go back to the encyclopedia place again. My daddy gave me back the money I lost in the deposit. From this job I learned I did not want to be an asshole. Or sell encyclopedias. 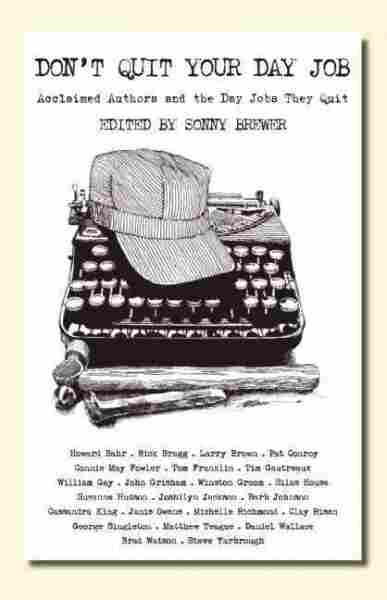 Acclaimed Authors and the Day Jobs They Quit