Accessibility links
First Black Elected Official Defies Racism In Russia For decades the Soviet Union recruited African students to study at its universities. But there are very few blacks in Russia today, and racism is prevalent. Jean Gregoire Sagbo, the country's first black elected official, says his responsibility is not to fail: "I want them to see that it doesn't matter what race you are." 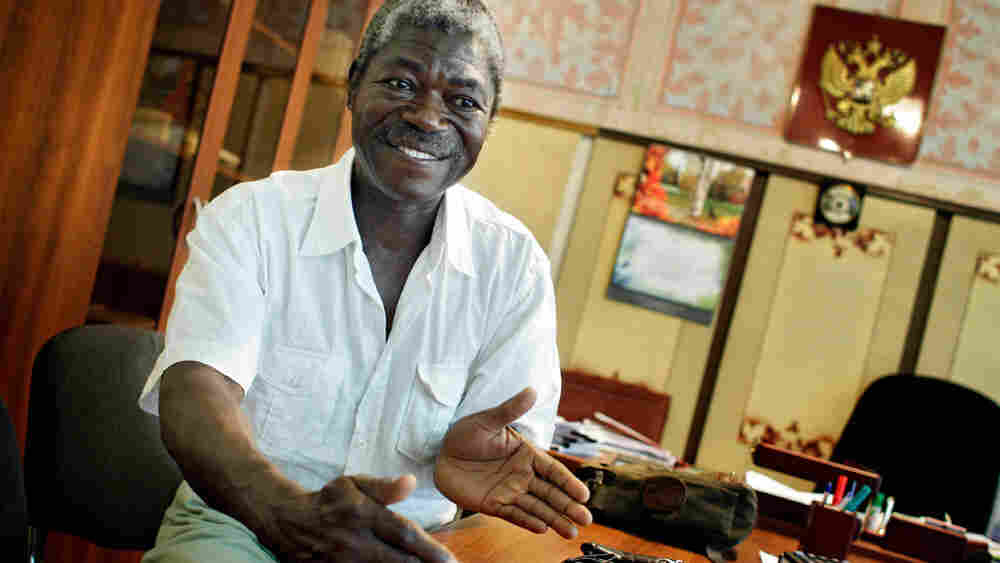 Russian councilman Jean Gregoire Sagbo speaks in the administration office in Novozavidovo, a village 60 miles north of Moscow, on July 20. As the first black man elected to public office in Russian history, he has been nicknamed Russia’s Obama, something he’s not too pleased about. Sergey Ponomarev/AP hide caption 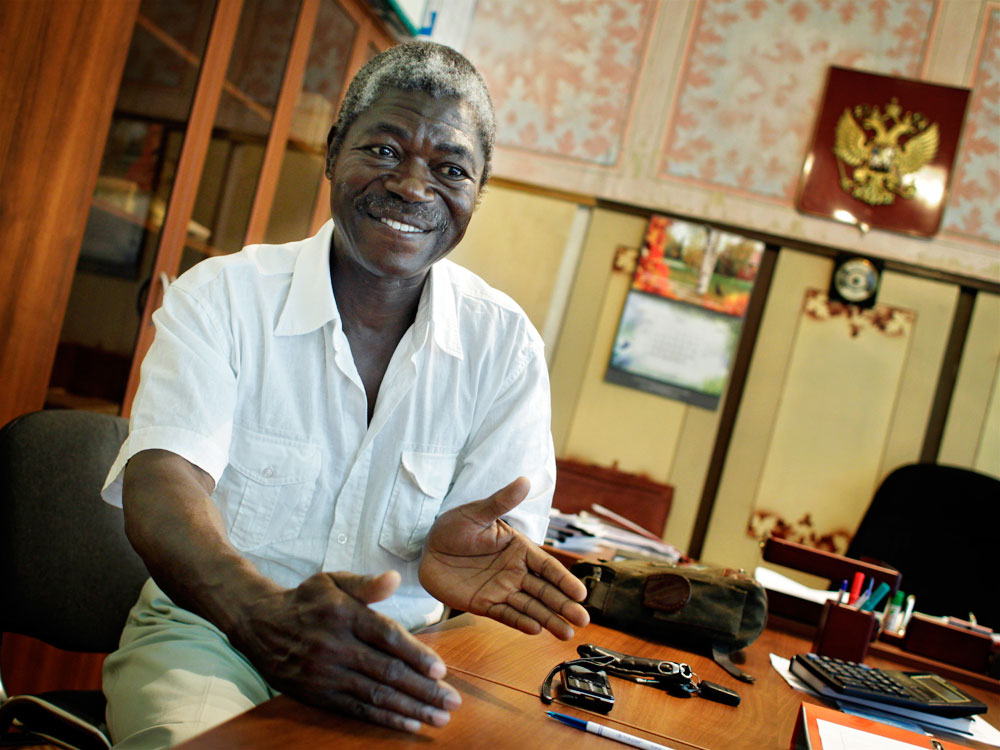 Russian councilman Jean Gregoire Sagbo speaks in the administration office in Novozavidovo, a village 60 miles north of Moscow, on July 20. As the first black man elected to public office in Russian history, he has been nicknamed Russia’s Obama, something he’s not too pleased about.

Life in Russia, in many ways, is much like life in the United States. A day in Moscow feels very much like a day in any American big city. People rush to and from work in cars, or on the bus or subway. After work, it's home to the family, or a stop at the gym.

Still, there are differences. Because the police and justice system are riddled with corruption, there's a feeling that if something happens to you on the street, you have no place to turn.

I was especially worried about two gay friends who came to visit me in Moscow. The city has a history of harassment against openly gay men. And the same goes for blacks.

Even though for decades the Soviet Union recruited African students to come to universities and learn about communism, there are very few black faces in Russia today.

Skinheads are active in the capital and elsewhere, and blacks have been harassed on the street and beaten on trains and the subway.

So, this summer, when I heard that a black man had been elected councilman in Novozavidovo, a small town 60 miles north of Moscow, I knew I had to go meet him.

The Obama Of Russia

Jean Gregoire Sagbo has dark rich eyes, an infectious smile and salt-and-pepper hair, which you'd think would be grayer after all he's been through. He was born in the West African nation of Benin and came to the Soviet Union in 1982 as a student. Back then, some Russians had a name for Sagbo and other black students: "monkeys."

Jelani Cobb, a professor of history at Spelman College in Atlanta, recently spent a year in Russia on a Fulbright grant teaching African-American history at Moscow State University. Cobb, who is African-American, found soon after arriving in Moscow that people of African descent would approach him on the metro and offer safety advice.
"Don’t ride the subway when there are big events. Don’t be anywhere you can attract attention to yourself," he says they would advise him. Cobb tells NPR's David Greene about his personal experience as a black man in Russia.

Sagbo told me he kept hearing the word "monkey" on the street. So he asked his Russian teacher what it meant. She said: "Where did you hear it? They weren't saying it about you. Such things don't happen here."

But such things did happen. And worse.

Sagbo fell in love with a Russian girl at his institute named Svetlana. When she became pregnant, she was kicked out of the institute for dating a "foreigner," and her mother beat her. The couple struggled for acceptance, living for a time in Benin, returning to Russia, and finally discovering peace in Novozavidovo. Sagbo got a job and quietly made a name for himself, helping those in need. Residents started calling him Santa Claus -- and earlier this year elected him to the town council.

He is the first black elected to public office in Russian history. You can understand why he's been nicknamed Russia's Obama, but it's something he's not too pleased about.

"The Obama of Russia, just because I'm black?" Sagbo says. "If you say that I'm as serious a person as he is, working for the good of the country I live in, then yes, sure. However I don't like this cynical boasting of, 'Look, we've got our own Obama too!' No. That I don't like."

Still, Sagbo says, his sense of responsibility extends beyond the town.

"This is the first time anyone from the entire African continent has managed to become elected here," he told me. "My responsibility is to not fail. If I fail, it would be an embarrassment for my entire race. And I wouldn't want them to say that I failed because I am black. So I must do well, very well."

In Novozavidovo, I found that Sagbo is seen as an honest, hard-working man. Near the train station, resident Tatyana Fomkina shrugged when I asked her about the race of her councilman. 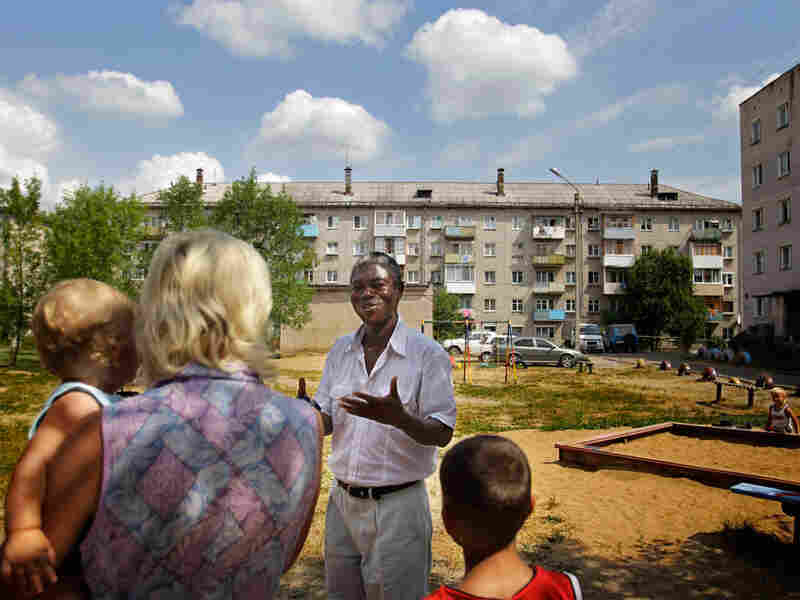 Sagbo speaks to constituents in Novozavidovo. Residents say Sagbo is the only councilman that ever visited the district after election. Sergey Ponomarev/AP hide caption 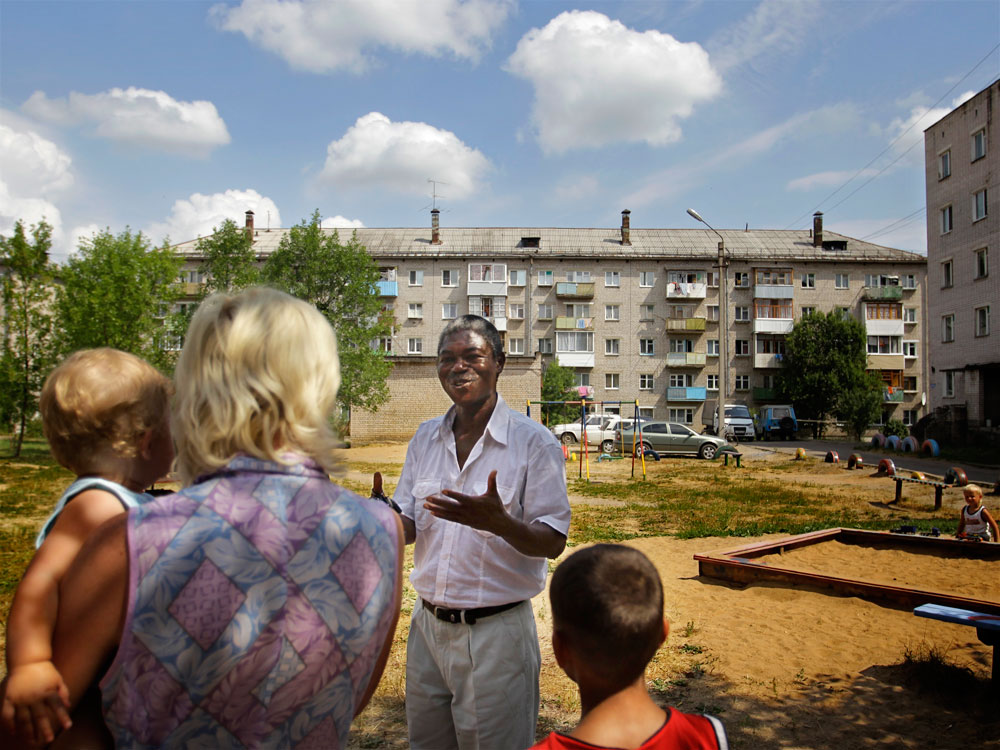 Sagbo speaks to constituents in Novozavidovo. Residents say Sagbo is the only councilman that ever visited the district after election.

"What's the difference?" she asked. "As long as he is a good leader, and a good person, that's all that matters."

But here's the ugly truth: The ease with which Sagbo walks the streets of Novozavidovo is not something he feels in the rest of the country. He won't get on the train to Moscow. He drives. Skinheads are active in the capital and elsewhere, and blacks -- not to mention other minorities like central Asians -- have been beaten on trains and on the Moscow subway.

The Moscow Protestant Chaplaincy, an outreach group, surveyed about 200 Africans in Moscow -- and found that more than half had suffered physical attacks.

Sagbo's wife, Svetlana, says she worries about her husband, and her sons who live in Moscow.

"Racism does exist and it hasn't gone away," she says. "Whenever my husband goes on TV, I always tell him to keep his family out of it. Don't show me; don't show our sons."

After I return to Russia, I'll be checking in with Sagbo and his family to see how he's doing.