Accessibility links
Cubans Flock To Evangelism To Fill Spiritual Vacuum Cuba has undergone a spiritual revival since the communist government eased religious persecutions in the 1980s. Despite Cuba's deep Catholic traditions, the fastest-growing practice may be one that arrived decades ago with American missionaries: evangelical Christianity. 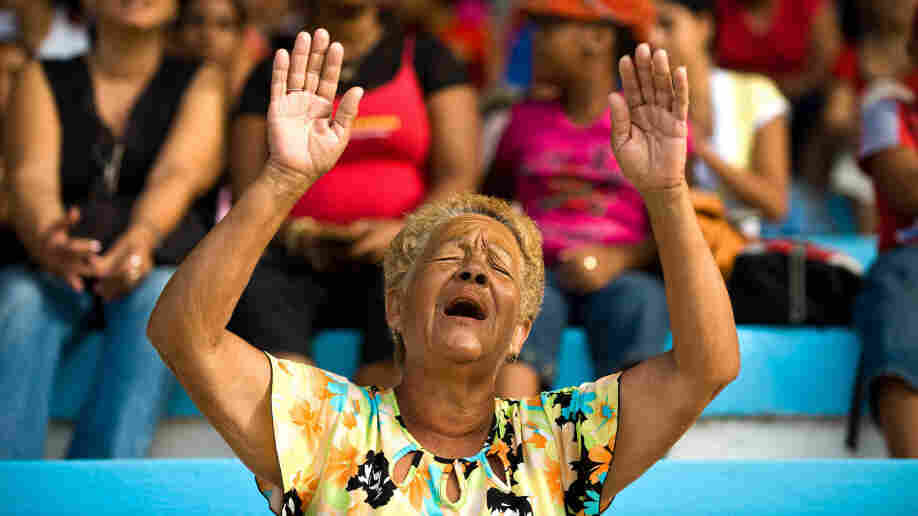 Some 3,000 evangelical Christian Cubans attend an open-air service in Havana to celebrate the 10th anniversary of their public service in 1999. Evangelism is among the fastest-growing religions in communist — and formerly atheist — Cuba. Adalberto Roque/AFP hide caption

When Cuban President Raul Castro met with the country's Catholic Church leaders this summer and agreed to free dozens of political prisoners, it was a major boost to an institution facing increased competition for Cuban worshippers.

The island has undergone a spiritual revival since the communist government eased religious persecutions in the 1980s. But the fastest-growing practice today may be one that arrived decades ago with American missionaries.

On a recent humid Sunday night at the Buenas Nuevas Pentecostal Church, rows of plastic chairs are packed, leaving some to watch from the sidewalk outside.

The church is a converted apartment on the ground floor of a crowded building in Havana's Vedado neighborhood. Light and music from the service pour through an open window, just below a pair of black lace underwear drying on a clothesline.

The church was founded in the 1950s by Pentecostal missionaries from the U.S. who arrived just before Fidel Castro's revolution. The congregation had 15 members when it started meeting again in 1994. Now, it's up to 300.

'Only God Can Fill Your Heart'

It is one of hundreds of evangelical churches that now span the island, bringing an American version of personal salvation to a country steeped in Catholic traditions, African spiritualism and the Cuban brand of Marxism that Castro has preached for more than half a century.

"Philosophy and social principles can't fill your heart," says Marcos Echevarria, the church's pastor. "Neither can vice, nor witchcraft," he adds, referring to Afro-Cuban Santeria, a mixture of Catholicism and the traditional African Yoruba faith. "At some point there comes a time when you realize that only God can fill your heart."

Philosophy and social principles can't fill your heart. Neither can vice, nor witchcraft. At some point there comes a time when you realize that only God can fill your heart.

The church's congregation is a cross-section of Cuba itself, spanning every skin tone and age group.

Nadiesca Cisneros, 29, joined the church when she was 14. Her beliefs made her stand out back then. Now, she says there seems to be a church on every street corner in Havana.

Cisneros says that in spite of all her problems, daily struggles and material needs, she sees God's hand in her life. He has healed her when she's been sick, she says. He speaks to her, he guides her.  "I've personally felt his presence, and that's what makes me a Christian," Cisneros says.

At the height of Cuba's militant atheism in the late 1960s and early '70s, religious believers were fired from their jobs and sent to labor camps for "re-education." That kind of discrimination officially ended more than 20 years ago.

Since then, the number of evangelicals in Cuba has grown from roughly 70,000 to more than 800,000 today, out of a population of 11 million, according to the Rev. Marcial Hernandez, president of Cuba's Council of Churches.

"We're taking back everything that was given away to the devil," Hernandez says, explaining the appeal of modern evangelical Christianity, with its rollicking music and passionate sermons, in contrast to the more staid practices of the Catholic Church and traditional Protestant denominations. "Televisions used to be considered devil boxes," he says. "Telephones were the Antichrist. Universities were the devil's lair, even beaches."

Cuba's ongoing economic crisis and longstanding American trade sanctions also have driven the spiritual revival. Loopholes in the U.S. embargo allow religious groups to channel aid to the island, and Cubans looking to leave often have found an easier path through church networks.

The Catholic Church's relationship with the government is historical. It's the established church, and it continues to have a privileged position. Many of the leaders of the Cuban Revolution attended Catholic schools, including Fidel Castro, who studied with the same teachers I did.

Enrique Lopez, religion scholar at the University of Havana

Religious scholars say Cuba's evangelical churches have recruited new worshippers and lured others away, especially from the Catholic Church. The evangelical movement is especially strong in Havana's poorer neighborhoods, where rural migrants have arrived looking for a sense of community. The island's first megachurch is already planned for the Alamar district outside Havana, according to Pentecostal leaders. It will have seating for 5,000.

Uneasy Relations With The State

Enrique Lopez, a religion scholar who teaches at the University of Havana, says Cuban authorities always have been a bit wary of evangelism, given its close ties to the U.S. and lack of a structured authority.

"The Catholic Church's relationship with the government is historical. It's the established church, and it continues to have a privileged position. Many of the leaders of the Cuban Revolution attended Catholic schools, including Fidel Castro, who studied with the same teachers I did," says Lopez.

Unlike many U.S. evangelists, preachers in Cuba tend to veer away from politics as a survival strategy. But the movement's growth has long-term implications for Cuba's future, especially given the presence of so many young people.

On Sunday afternoons at one church in Havana's Marianao neighborhood, hundreds of university students sing and sway at a special youth service. The students aren't allowed to organize Bible groups on campus, and they risk expulsion if they proselytize there.

Jorge Ortega, a pastor at the church, explains the restrictions that churches still face.

"We can't have services in public stadiums or invite foreign preachers to give sermons. We can't have Christian schools. But we can minister in hospitals, and spread the word of God in public places," such as parks and buses, Ortega says.