Accessibility links
How The L.A. Times Broke The Bell Corruption Story This week, eight current and former Bell, Calif., officials were arrested and charged with enriching themselves with public money. Few of these developments would have happened without the aggressive and unrelenting work of two Los Angeles Times reporters. 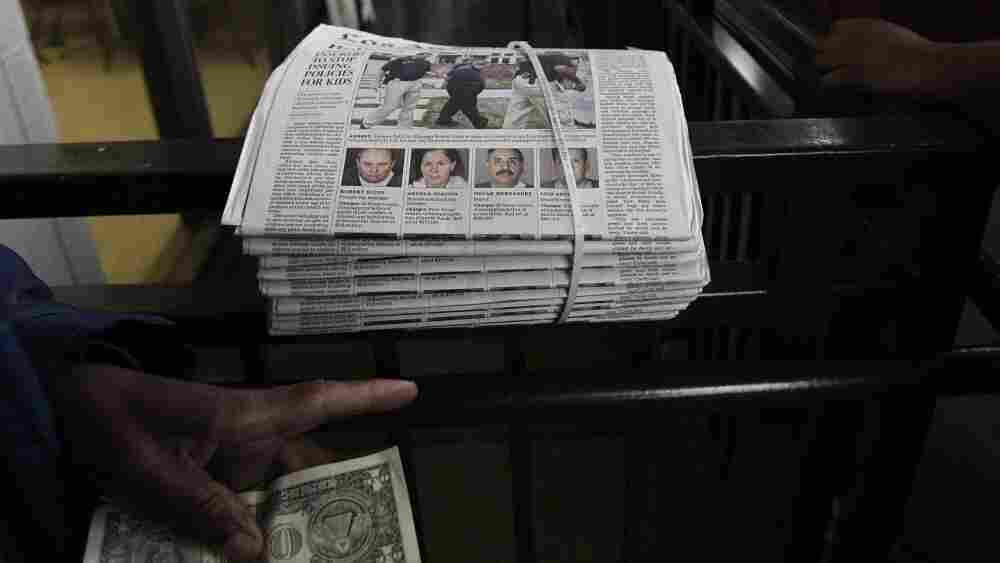 A vendor sells a copy of the Los Angeles Times with an article about Bell city officials on the cover. Jae C. Hong/AP hide caption

Reporters get threatened, dismissed or ignored all the time. Less common is the experience of Ruben Vives, a 31-year-old reporter for the Los Angeles Times, as he recently waded his way through a crowd to cover a city council meeting.

An older woman stopped him and demanded a hug.

"So I hug her," Vives recently recalled. "And she just says, 'Thank you so much,' and she kisses my cheeks. And then she turns to everyone and says, 'This is Ruben -– this is the guy who broke the story!'

"And then everyone is clapping and yelling and saying, 'Yeah!' and taking pictures. It was just a bizarre thing to me."

The stories involve the small working-class city of Bell, Calif., less than a 20-minute drive southeast of downtown Los Angeles. This week, eight current and former city officials were arrested and charged with enriching themselves with public money. Major investigations are under way.

Tripping Over The Story

Few of these developments would have happened without the aggressive and unrelenting work of Vives, who worked his way up from copy boy, and his colleague Jeff Gottlieb, 56, an experienced reporter and editor.

They make a classic pair -– part Woodward and Bernstein, part Mutt and Jeff. But the scandal almost escaped their attention. 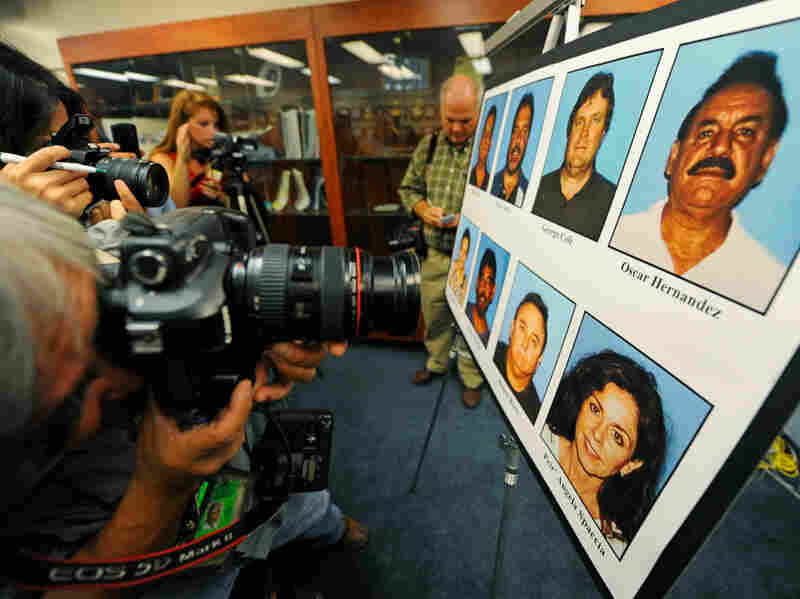 Photographers take pictures of a display of current and former Bell council members who were arrested on corruption charges during a news conference Tuesday in Los Angeles. Kevork Djansezian/Getty Images hide caption 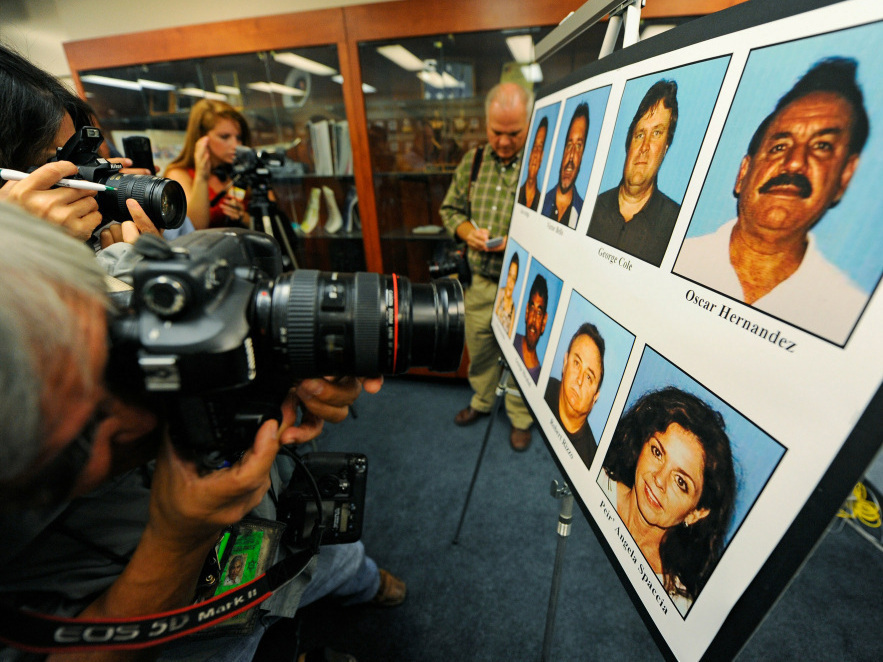 Photographers take pictures of a display of current and former Bell council members who were arrested on corruption charges during a news conference Tuesday in Los Angeles.

Vives tripped over the story in June -- the neighboring city of Maywood was so strapped for cash it wanted Bell to take over city services, like policing. But his colleague Gottlieb learned of an investigation into pay for Bell's city council members. Their attention swung to Bell and they demanded public documents.

"Literally every day, I'm calling the city clerk," Gottlieb said. "I'm telling her, 'Listen, are we getting the documents? I really don't want to sue you, but we will, and when we go to court, and we win, because we will, we'll ask the judge to make you pay our legal bills, because that's what the [public records] statute says.'"

The city manager, Robert Rizzo, finally relented, but they had to meet him at a conference room near a city park for kids. That was weird enough -- but nine city officials and lawyers showed up.

He had. But Rizzo was being modest. He was being paid $1.5 million in all. The reporters painstakingly pieced together the puzzle. Only 400 people took part in a 2005 vote that made Bell a charter city. New city commissions gave council members new posts that paid them big bucks, too, out of the public eye.

Indeed, Bell is not a city accustomed to getting attention from the Los Angeles Times, or from anyone else for that matter. There are 88 cities in Los Angeles County, as well as countless water boards, school districts and the like. Gottlieb and other L.A. Times reporters responsible for covering local municipalities say they often have to treat their territory like foreign correspondents: dipping in but not lingering.

Even with the paper's size -- the L.A. Times is one of the nation's largest dailies -- editors say they have to pick their spots because of its finances. Advertisers are shifting much spending from print products to the Web, and the flagging economy doesn't help. Meanwhile, the paper's corporate parent, the Tribune Co., is in bankruptcy court. The news staff of the Times is half the size it once was.

"When I arrived at this newspaper 10 years ago, I was assigned to cover the city of Anaheim, and I went to every single city council meeting -- I mean, that was part of my job," said Kimi Yoshino, the assistant city editor who is helping to guide coverage of the Bell scandal. "And I would say we don't have any reporters, with the exception of those covering Los Angeles city council, who go to every single council meeting any more."

Vives covers the hard-pressed southeastern part of L.A. County, including Bell, which, according to the latest available figures, is a densely packed city of 36,000 people, mostly Mexican-Americans with a smattering of Lebanese immigrants.

A tour around the city doesn't take long. There are just two main commercial strips -– one with mom and pop stores, the other drag, a parallel street a few blocks away, with chains like Kragen Auto Parts and Starbucks. Highlights of the tour include a showing of the mayor's liquor store, located across the street from an elementary school, the car dealer's lot acquired by the city from a well-linked politician, and the unusual spectacle of a public park with elliptical machines in the open.

Public officials always pointed to the city's parks when defending their accomplishments.

I really feel like they prey on these communities because it's an easy target.

One woman working out at the ellipticals wouldn't talk on the record about local politics because, she said, she lived in a public housing unit there and feared it could be stripped from her.

Local activist Cristina Garcia says many people in Bell work for the city, receive public aid or are not citizens. As a result, she said, few speak out. And, she said, that gives unscrupulous politicians an opening.

"I really feel like they prey on these communities because it's an easy target," said Garcia, a college instructor who lives in nearby Bell Gardens.

She said municipal corruption is rife throughout the region.

"In this case, I think it's bankrupted the community," she said.

Council meetings used to draw four or five people. Since the Times began to focus on Bell, as many as 2,000 have shown up to heckle and challenge their elected officials. The integrity of some of those elections is now under investigation.

A state audit revealed this week that public service taxes were doubled to boost compensation for Rizzo, the former city administrator. Other taxes went sky high, too. Investigators are now looking at contracts worth tens of millions of dollars given to associates and some taxes are being returned to residents.

In a perfect world, someone would have called foul years ago, but it's hard to know how that would have worked for a city like Bell.

"Our policy pretty much is we report the news, we don't make the news," said Arnold Adler, 73, a reporter for the Wave community newspapers.

Adler has covered Bell since 1980. But he also covers 14 other cities and says he doesn't have time to do much more than make calls after official meetings.

"We don't have the people or staff to go digging around, hoping we stumble on a scandal," he said.

The new media ecosystem, in which citizen bloggers, small news outlets and big old-school media outlets effectively draw upon one another's work to collaborate, didn't quite work out in this case.

"We have found that when we're not looking, a lot of things happen that people don't find out about," says David Lauter, the Times' associate managing editor for metro news.

One blogger actually has anonymously and exhaustively alleged corruption in Bell for years on WatchOurCity.com. He goes by the pen name Pedro Parramo, for a character in an iconic Mexican novel. NPR agreed not to identify him because he fears personal and professional retribution.

In his few public appearances, he wears a Mexican-style wrestling mask.

They keep giving you the runaround, they keep telling you, we'll call back. No one could ever help us. No one was ever around.

The paper's reporters say the blogger gave them tips. Though he's a bit frustrated not to get more credit, he says the newspaper's reporting muscle and much bigger audience gave life to the story in a way his website simply couldn't. He counts his readers in the scores; The L.A. Times has hundreds of thousands of subscribers -– though far fewer than it used to.

In a meeting with more than two dozen angry Bell residents at the makeshift office of BASTA, a new community group, some residents said they had gone to city hall to get their own answers. In essence, they were trying to do their own reporting on why their tax bills were so high and on rumors city officials were making a ton of money.

"They keep giving you the runaround, they keep telling you, 'We'll call back,'" recalled Miguel Sanchez, a 33-year-old special education teacher's aide. "No one could ever help us. No one was ever around."

Sanchez said the lies stopped only when the L.A. Times reporters came to town.

"As a common citizen, I don't know what my rights are with the city. I don't know really how to attack them," Sanchez said. "The Times, they have their legal departments. Of course, they're able to get it more than a regular Joe like me."

There are now close to a dozen reporters and editors writing about the scandal as it has metastasized to many cities nearby. And Vives and Gottlieb say they still can't buy a beer for themselves when they hit the bar after late-night city council meetings in Bell. Too many people want to buy their drinks.

It's a shot in the arm for the beleaguered L.A. Times -– and a needed jolt for a city whose leaders have been able to avoid scrutiny for years.

"As a newspaper and as a watchdog, it was important to protect those who aren't protecting themselves," says Yoshino, the Times editor. "Whenever you get a good story, it just brings out the best in all of us. It makes us excited.