Accessibility links
Dick Dale's Guitar Screams With Pain And Pleasure Dick Dale's musical influences come from a rather unconventional mix of sounds, including crashing waves, wild animal roars and folk songs from decades prior. Its from these sounds that he's crafted some of his most popular songs, many of which can be found on his new compilation album, Guitar Legend: The Very Best Of Dick Dale. 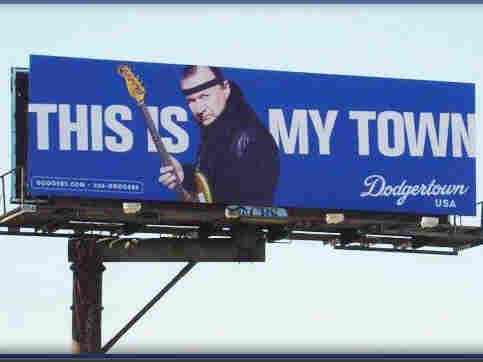 Dick Dale's musical influences come from a rather unconventional mix of sounds, including crashing waves, wild animal roars and folk songs from decades prior. Its from these sounds that he's crafted some of his most popular songs, many of which can be found on his compilation album, Guitar Legend: The Very Best Of Dick Dale.

Having grown up in Massachusetts, Dale's penchant for music quickly brought him attention. He remembers winning an Elvis Presley song contest, when he was awarded the opportunity to perform during the intermission of an Elvis double feature at the local cinema.

"All I had was this one little guitar and a little Flash Gordon microphone, and about a six-inch speaker," Dale says. "That's how I started rolling."

Dale and his family moved to Orange County, California in 1954. He took to surfing, becoming fixated on the loud rumbling sound within the tube of a breaking wave. He founded a band, The Del-Tones, and the group became a sensation on the scene with their surf rock sound. Their first hit was "Let's Go Tripping", inspired by their fans' wild cheers before a show in Balboa.

"They were lined up in their cars, all the way three miles to the main pacific coast highway," Dale says. "They'd be screaming 'Let's go tripping on down to see Dick Dale.'"

The guitarist soon crossed paths with Leo Fender, who was then developing the brand of guitars and amplifiers that would bring a new dimension of sound to early rock music.

"He says, 'Here, I just made this guitar.' It was a Stratocaster," Dale says. "He says, 'Beat it to death and tell me what you think.'"

Dale's affinity for loud volumes was also influenced by his mountain lion, one of the 40 exotic pets he kept in an effort to preserve rare species. He also felt inspired by Gene Krupa, a boisterous drummer from the big band era. He soon began toying with "Misirlou," an old folk song he had learned from his Lebanese uncles.

"I would listen to them play it, but it's played slowly. And then I started playing it, and I said 'Oh no, that's too slow,'" Dale says. "I thought of Gene Krupa's drumming, his staccato drumming. I went and put 'Misirlou' to that rhythm."

Dale's version was titled "Miserlou" and it would become their signature song, gaining a new generation of fans when Quentin Tarantino made it the opening track to Pulp Fiction.

With a tour on the way to accompany his new compilation album, Dale says he'll be keeping true to his inner ferocity on stage.

"I make my guitar scream with pain or pleasure or sensuality," Dale says. "It makes people move their feet and shake their bodies. That's what music does."