Accessibility links
An Author's Personal Library Lost And Found When a writer dies, what happens to the books he or she owned? Literary journals and letters are often preserved. But book collections end up in the local bookstore -- and, perhaps, in your own library. 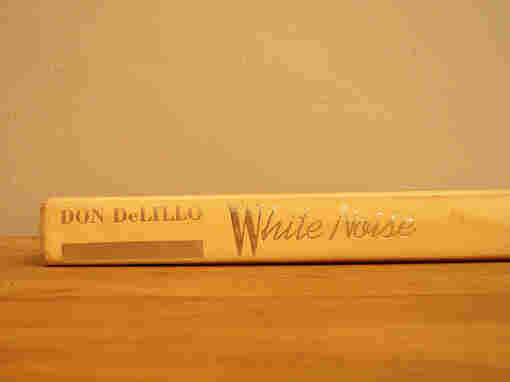 When Annecy Liddell bought this used copy of White Noise at New York's Strand bookshop, she discovered that the book's previous owner, novelist David Markson, had left a host of handwritten notes in the margins. Annecy Liddell hide caption

"I just wanted a book to read on the subway," she says.

She was after Don Delillo's White Noise. But when she picked it up, she noticed that the previous owner had written his name on the inside cover: David Markson.

"The girls at the counter said, 'Oh, this is one of Markson's. We have his whole collection,'" she says. "I had no idea who were they talking about."

But then as she read the book, she began to come across notations inside: check marks by certain passages, the occasional curt "no" in the margins. 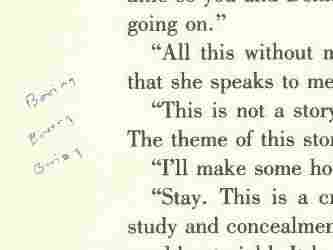 Markson's comments grew more scathing as the book went along. His favorite word seems to have been "boring." Annecy Liddell hide caption

"And then the comments just got meaner and meaner," she says. "He thought it was boring. I think the word he used most was boring."

Curious about the guy who seemed so critical in the margins, she Googled him -- only to find out he'd died a month earlier.

It turned out that David Markson wasn't just a casual reader. He was a writer himself and was moderately well-known. Author David Foster Wallace had called Markson's novel Wittgenstein's Mistress "pretty much the high point of experimental fiction in this country."

Liddell thought her find was worth posting on Facebook, where an ex-professor with some literary connections saw it. Eventually word spread, and before long more than 100 people had gathered online. They were people who'd also gone to the Strand and purchased books that happened to be from Markson's personal library.

Which raised the question -- how did his library wind up there?

A Library Left, Not Lost

It wound up there, writer Craig Fehrman tells NPR's Guy Raz, "because he wanted it to."

Fehrman, who wrote about the lost Markson library for The Boston Globe, says Markson lived a few blocks from the Strand. Employees there knew him by name from his visits several times a week.

So when he died this summer, he left his personal library to the bookstore.

The store sent a truck to pick up the books, Fehrman says -- 63 boxes in all.  "From there, they sorted it out. 'These go to philosophy, these go to art history, novels, literary criticism and philosophy." Then the books were set out on the Strand's normal shelves.

Many of those books contained the same sort of annotations Liddell found in her copy of White Noise, like check marks and underlined passages that spoke to him.

"But he would also disagree and quibble with people," Fehrman says, having a conversation with writers in the margins of his books. And it wasn't always a pleasant conversation.

Markson wasn't just grumpy. Fehrman says his critical annotations were a function of his being a novelist.

"The stakes were really high, because this was what you've devoted your life to and what other people have devoted their lives to," saysFehrman. "He's going to be more critical and more attuned to wanting the form to work."

Like Markson's, the personal libraries of many authors are often not well cared for by the people they leave behind.

"Mark Twain is a particularly cringe-worthy case," Fehrman says. He didn't care much what happened to his own books, and even donated some of them off while still alive.

"The library circulated them with all their other books," Fehrman explains.  Souvenir hunters would then swoop in and cut out pages with Twain's handwriting, or his signature on the flyleaf.

"He didn't really see these books as that important," says Fehrman. "He had the books that he had written, and that's what mattered to him."

Herman Melville's library was also famously scattered. After his death, his wife and daughter kept only his smallest books. They were short on space.

"Melville's will noted he owned at least 1,000 books, but scholars have been able to deduce a list of only about 400," says Fehrman. "The ones that survive are certainly interesting. He owned a copy of John Milton's poems, and from that you can tell things like he read Paradise Lost while he was writing Moby Dick -- certainly an important and fascinating connection."

This month, an exhibition of David Foster Wallace's library and papers opened at the Harry Ransom Center at the University of Texas. Fehrman calls that a partial success story.

"It wasn't like all his books ended up there," he says. Wallace's widow and agent leafed through books in his university office, skimming for anything annotated. Anything without much handwriting was given to charity, some 30 boxes of books in all.

"I can understand why the Ransom Center wouldn't want all those books," says Fehrman. "But when we think of authors' libraries as a kind of intellectual biography, future scholars would love to have just a list of the books Wallace  owned. Even if he didn't necessarily write in them, that helps them connect the dots between what he read, what influenced him, and what he eventually wrote."

So why isn't more care taken to preserve libraries?

Fehrman thinks it has to do with the way we fixate as a culture on the personality of our authors.

"Things like manuscript, diaries and journals -- those get saved and cared for. But when it comes to a writer's books, they don't receive the same kind of care and attention, just because they're less immediately connectable to the author's personality."

As for Liddell -- she never finished White Noise. The annotations proved too distracting. She did, however, read Markson's book Wittenstein's Mistress.

And even though she hasn't finished it, she's keeping White Noise.

"One guy actually asked me if he could buy my book," says Liddell. "I politely declined. I mean, things like this don't happen to me. I found this thing -- I want to hold on to it."