Accessibility links
Obama Woos Young, Middle Class As Voting Day Nears The president begins a four-state, three-day political tour Monday. One goal is to mobilize younger voters. But Obama is also aiming his pitch at the middle class -- using backyard talks with voters to make the case that he and his fellow Democrats have their interests in mind. 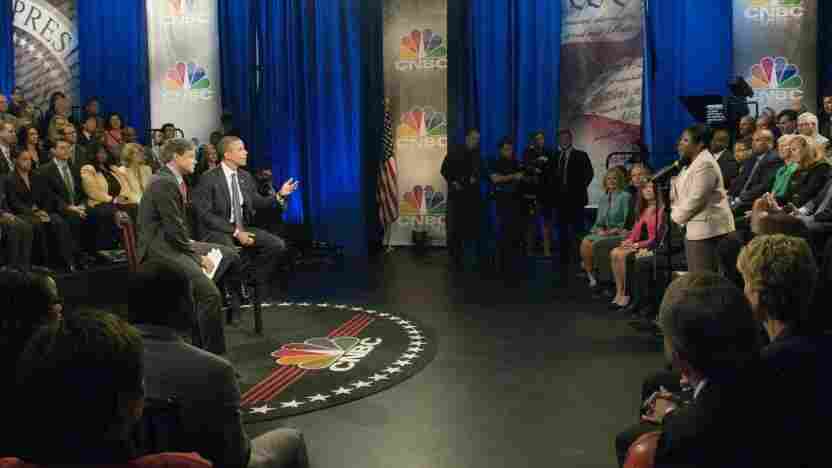 During last week's town hall meeting on CNBC, Velma Hart (at right) drew much attention for telling President Obama that she hasn't seen the "meaningful" change she thought he would bring to Washington. Handout/Getty hide caption

But he'll do most of his campaigning in smaller settings, talking with ordinary voters in backyards or around kitchen tables. The conversations are designed to appeal to middle-class voters, many of whom are dissatisfied with the state of the economy on Obama's watch.

Political adviser David Axelrod says the president enjoys backyard conversations because they give him a chance to interact with voters in a personal way. There's no script, but there is a message the White House wants to convey.

The message this week is moving the economy forward and putting people back to work, Axelrod says.

We're still seeing that, as far as many people are concerned, with unemployment near 10 percent.

The president came face to face with that frustration last week during a town hall meeting on CNBC, when Velma Hart told him she had voted for him but is deeply disappointed with where the country is right now.

"I'm a wife. I'm an American veteran. And I'm one of your middle-class Americans. And quite frankly, I'm exhausted," she said.

"I voted for a man who said he was going to change things in a meaningful way for the middle class," Hart said. "I'm one of those people, and I'm waiting, sir. I'm waiting. I don't feel it yet. And I thought, while it wouldn't be in great measure, I would feel it in some small measure."

Obama says he hears that frustration all the time when he meets with voters or reads their letters.

During the CNBC town hall, he tried to be reassuring: "My goal here is not to try to convince you that everything is where it needs to be. It's not. That's why I ran for president. But what I am saying is that we're moving in the right direction."

He says the argument that things are slowly getting better might wash with professional economists, but it doesn't fly with many voters.

"You can't make the case that we're on the right direction, or our programs are starting to work, or we've brought the car out of the ditch," Greenberg says. "They hear that, and their eyes roll. You just sound out of touch."

But Greenberg says there's another argument Democrats can make that does sway independent and impressionable voters in their favor: "The message that shows Democrats battling for the middle class and Republicans battling for Wall Street -- it's a battle about who we are and who they are."

Greenberg adds that for Democrats trying to make this argument, the battle over extending Bush-era tax cuts is "a gift."

Most Democrats, including the president, want to extend the cuts for all but the wealthiest Americans, while Republicans say the cuts must be extended for everyone. It now appears that Congress won't decide the issue before the November elections.

"They're saying 'we won't pass it' -- this tax cut for 98 percent of the American people -- unless we agree to give the tax cut to upper-income people and borrow $700 billion to do it," Axelrod says. "We're saying that's irresponsible. We don't do it. But let's move forward on what we can agree on."

Obama regularly argues that the economic problems facing the middle class didn't begin with this recession, including in his answer to Velma Hart: "My goal here is not to try to convince you that everything is where it needs to be. It's not. That's why I ran for president."

Over the past decade, Obama notes, income for the average family tumbled nearly 5 percent, the worst decade in a half-century. He sees that as an indictment of Bush-era policies that many Republicans now want to return to.

But the president's persistent focus on achieving long-term improvements, through changes in health care, energy and education, frustrate many voters looking for more immediate relief.