Accessibility links
Today's Tea Party Isn't Quite Like 1773's While supporters of the movement have latched on to the idea that people need to "take their country back," historians say there are many differences between what's driving things today and what was happening during the American Revolution. 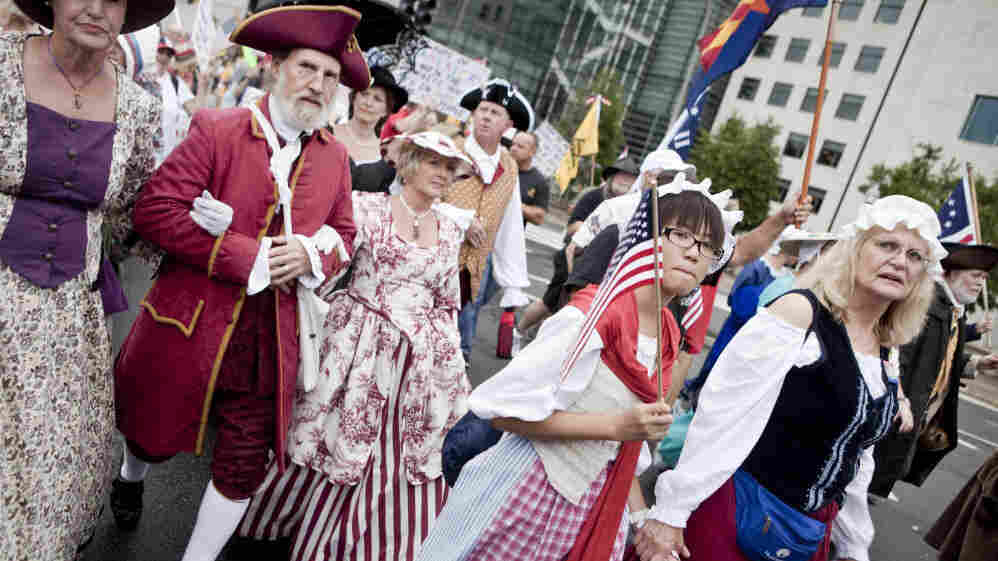 Google the phrase "Tea Party" these days, and the first dozen-or-so hits are all about the contemporary, multi-tentacled political force.

At the top of the screen, there's the obligatory Wikipedia entry: "The Tea Party movement is a populist political movement in the United States that emerged in 2009 through a series of locally and nationally coordinated protests."

Then there's the Tea Party site that lists local organizations; the TeaParty.org site featuring its founder, Dale Robertson; the American Family Association's Tea Party Day site; the Tea Party Express site that solicits funds for Tea Party candidates and on and on.

Google "American Tea Party" and you get pretty much the same roster of websites.

Somewhat lost in all of the lists is the original American Tea Party, the 1773 revolt by Boston colonists against British rule, a rebellion that turned out to be a seminal moment in the American Revolution.

The rhetoric of today's Tea Party movement is seasoned with words and phrases from the 18th century. Tea Party Patriots, for instance, "is a community committed to standing together, shoulder to shoulder, to protect our country and the Constitution upon which we were founded!"

There was a time when the words "Tea Party" conjured up Revolutionary soldiers, muskets in hand, forming a phalanx of resistance to oppression. Now the phrase brings to mind former Alaska Gov. Sarah Palin, a Glenn Beck rally and Delaware Senate candidate Christine O'Donnell on the campaign trail.

What are the similarities and differences between today's Tea Partiers and the 18th-century Revolutionaries? To casual students of American history, the admixture of these two tea parties -- present and past -- can lead to confusion.

At the Boston Tea Party Ships and Museum, for instance, people call in looking for information about the present-day Tea Party.

The ships and museum, says spokesperson Shawn P. Ford, are tourist attractions that commemorate the event of Dec. 16, 1773 -- when men, disguised as Mohawk Indians, tossed crates of British tea into Boston Harbor to protest the royal government's tea tax. 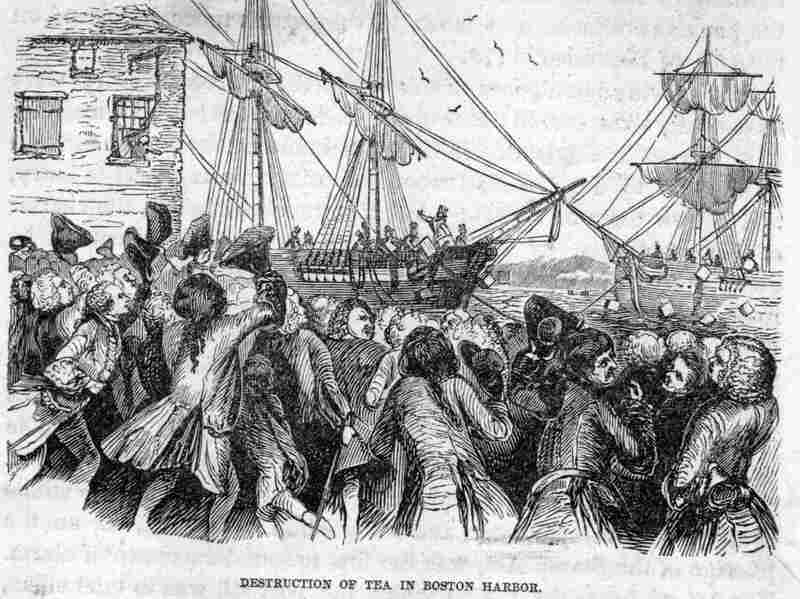 Today's Tea Party, Ford says, "has nothing to do with us. When I do get calls about the Tea Party movement, it is a simple misunderstanding."

Misunderstanding, yes. Simple, not always. Kathy Laughlin makes sure her students know the difference. Laughlin, who teaches Advanced Placement U.S. history at William Byrd High School in Vinton, Va., says she has been teaching her students about the Boston Tea Party as part of a "Road to Revolution unit" this school year.

She pre-empted questions about the contemporary Tea Party. "I explained that the current movement deals with big government and excess taxes much like the colonials did, but that the colonials truly had no representation in the legislature that was instituting their taxes," Laughlin says.

Laughlin goes on to explain to her students that today's Tea Partiers have representation; they are just not pleased with the representatives.  "Therefore," she says, "the present movement's goal is to unseat incumbents and elect ultra-conservative members to congress."

You Say You Want A Revolution

Rep. Michele Bachmann (R-MN), one of the GOP lawmakers who has cultivated and won support from the Tea Party movement, has said it represents "mainstream American people who have decided to get up off the couch because they want to take their country back."

At a midsummer 2010 news conference, she said, "They've come essentially under a banner of three things, and it's this: They believe that we are 'Taxed Enough Already,' that the federal government should not spend more money than it takes in, and that Congress should act within the constitutional limitations as given to us by the Founding Fathers." 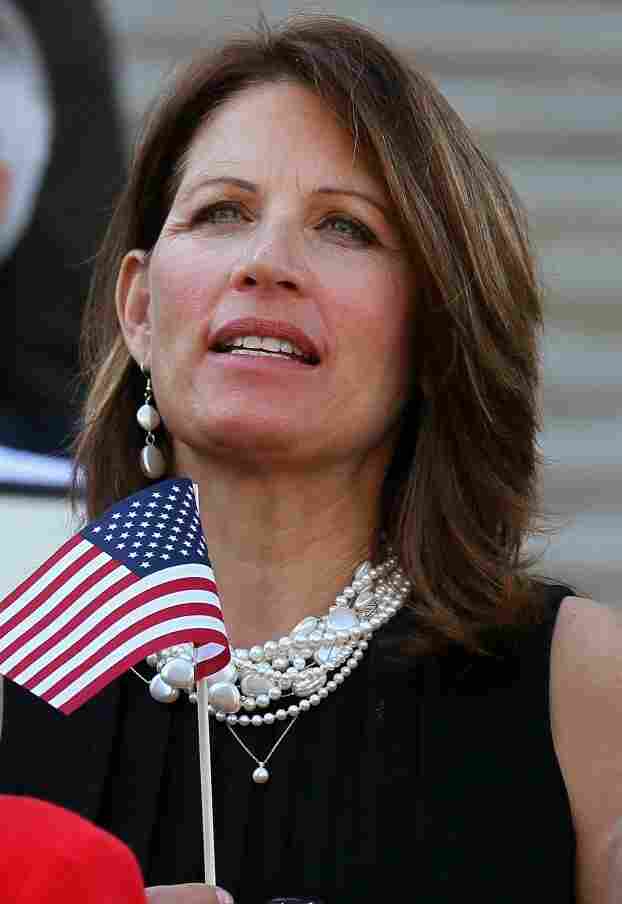 The 18th century was also invoked when Bret Baier, writing for Fox News in March 2009, reported on the nationwide gathering of "tea party protests." The rallies against excessive government spending, Baier wrote, were "inspired by the Revolutionary War-era Boston Tea Party protesting British taxation. Protesters had signs reading 'Give us liberty, not debt' and 'Where's my bailout?' "

The Tea Party movement, which has succeeded in knocking off some Republican lawmakers deemed not conservative enough, has become a conflationary catch-all for many disgruntled citizens.

Jill Lepore, a history professor at Harvard University and author of the soon-to-be-published The Whites of Their Eyes: The Tea Party's Revolution and the Battle over American History, says agitated Americans have been expropriating various aspects of the American Revolution since 1776.

In her book, she points to George Ticknor Curtis, a Massachusetts attorney and historian who wrote The True Uses of American Revolutionary History in 1841. "He was hopping mad about the tea partiers of his day," Lepore writes. "He was sick of people invoking the Revolution to ad­vance a cause. ... He just wished people would study the Revolution instead of using it to make political arguments."

In an interview, Lepore says, "What most people know about the American Revolution, they learned in elementary school." Common understanding of the events leading up to, and following, the Declaration of Independence, Lepore says, "is a little bit comic-booky. It has a comic quality to it, an association with childhood, paper dolls, Johnny Tremain."

Because of that only-distant familiarity, the American Revolution is still malleable -- and often misunderstood -- in the political imagination. For instance, she says, the Revolution was not a single act of rebellion; "It was a decades-long struggle about the nature of government." Taxation was only one aspect of the debate. In fact, "the tea tax that led to the Boston Tea Party actually reduced the price of tea."

Americans "want to look to a common past." But the idea of a unified-in-purpose nation, she says, "has its origins in 19th-century romantic nationalism."

She encourages her students and others to wrestle with the true meanings of the American Revolution. This questioning of what the tea parties --  present and past -- are all about "is an important part of our political debate."

And so the arguments rage on.

There is one valid point of comparison between today's Tea Partiers and the 18th-century Revolutionaries, says Jack Rakove, a professor of American history at Stanford University and author of several critically acclaimed books on the Revolutionary era.

The Tea Act of 1773 that sparked the Boston Tea Party, Rakove says, was born of the crown's collusion with corporate Britain -- the East India Trading Co.

So if Tea Partiers are up in arms over the American government being in cahoots with the corporate world -- say, over the Bush and Obama administrations' handling of the Troubled Assets Relief Program that bailed out many faltering financial institutions -- the present-day dismay would have legitimate roots in the ire of yesteryear. "That wouldn't be implausible," Rakove says.

But where the comparison between Now and Then breaks down, says Rakove, echoing high school teacher Laughlin, "is the basic issue of representation."

Tea Partiers today have representation in government, Rakove says. The Boston Tea Party participants did not.

The Boston Tea Party was staged in response to the British Parliament handing down laws and meting out taxes willy-nilly to colonists who had no vote, no say-so in their own destiny. "That was the gut issue of the American Revolution."

But still, the debate is being played out in classrooms and in Google searches across the country -- and at the Boston Tea Party museum in Boston. The museum, which is under renovation, is scheduled to reopen in the summer of 2011. "As of this moment and time," says Ford, the museum spokesperson, "we have no plans to incorporate the Tea Party movement in any of our interpretations."