Accessibility links
The Root: The Meaning Of Eddie Long's Demise Black Mega-church star, Bishop Eddie Long, has been the recent target of accusations that he engaged young men in inappropriate relationships. Craig Washington of The Root argues that this should teach the American people to question their leaders, and not to follow them blindly.

The Root: The Meaning Of Eddie Long's Demise

The Root: The Meaning Of Eddie Long's Demise 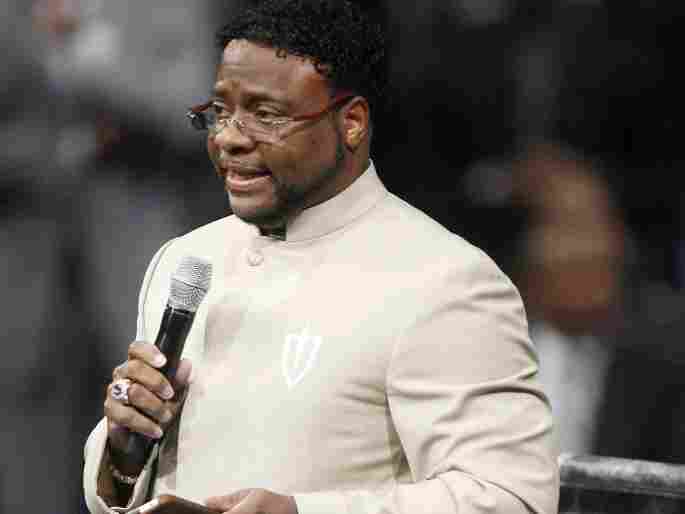 Craig Washington is a writer and an HIV-prevention manager for AID Atlanta. He has been HIV-positive for 25 years.

If we learn nothing else from the biggest and messiest black mega-church scandal ever, it is that truth cannot be silenced, no matter how many refuse to speak it or conspire to hush it up. It will find a way to manifest. It does not need to be spoken to reveal itself. So as the story of Bishop Eddie Long swells from Facebook to CNN, engorged by our lust for fallen giants and monsters, let us not lose our heads. Let us learn the lessons that the legion and their leader willfully chose to ignore.

While it is a shock, it should be no surprise to anyone who watched. Long's potent combination of charisma, bling and prosperity gospel, in the tradition of Father Divine, helped him amass considerable wealth and celebrity status. Like several of his white counterparts, Long pandered to the anxieties and desires of his flock at New Birth Missionary Baptist Church with a potent blend of social conservatism, materialistic worship and anti-gay rhetoric.

Not content to build the largest black congregation in the Southeast, Long sought currency with the political right by advocating for anti-gay marriage legislation through his infamous Reigniting the Legacy march in 2004. In doing so, Long parroted white right-wing misappropriation of Martin Luther King Jr. to deepen political wedges between blacks and the LGBT community. His minstrel antics have drawn stinging denunciations from the likes of Al Sharpton and respected theologians James Cone and the Rev. Irene Monroe. Besides a small demonstration, however, little local public outrage materialized.

The bishop's standing seemed unshaken in 2006 when New Birth hosted Coretta Scott King's star-studded funeral, which featured three U.S. presidents. Long seemed untouchable, even as rumors swirled about sexual trysts with young men dubbed his "spiritual sons." But then, they were merely rumors, the same sort of rumblings that follow some pastors, mega and storefront alike.

Three separate lawsuits have placed Long at the center of the stage he so craved but under a revealing spotlight that he had deftly avoided for two decades. The accusations seem more compelling than earlier precedents like Ted Haggard and Jimmy Swaggart, triggered by a single accuser or incident. Following the first two, presented Tuesday, the addition of a third suit seriously challenges the counterclaims of greed-driven conspiracies. And then there are those jaw-dropping details: Lavish gifts of money, college tuition, cars and trips to several cities were allegedly provided by Long, who allegedly engaged all three men in sexual relationships when they were 17 and 18 years old.

Yet it is not the frequency of the supposed incidents, the expanse of time and location over which they are alleged to have transpired, nor the commonalities among the three plaintiffs that render the charges difficult to dismiss. It is the price these young men will surely have to pay for their public claims against the best-known black pastor in the Bible Belt. Those who doubt his accusers should ask themselves what would be worth the media scrutiny and pointed hostility that they will suffer regardless of the outcome.

Like many black boys, regardless of sexual orientation, they were seeking the caring guidance of an adult black man -- something too often unavailable in our communities. Consider the impact of being rewarded by someone older with attention that looks like love, and at the same time being coerced into a sexual relationship, finding that sexual attention pleasurable on Saturday night and then receiving messages that such acts are immoral and perverse on Sunday morning.

For many young people, the reality is that they are sacrificed on the altar built for pastors we have deified. We must dismantle the cult of the clergy and other leadership frameworks that place male leaders above reproach. We must stop regarding our cowardice as loyalty and take the risks to support our young when they are victimized.

How can we ensure them that if they disclose their abuse, they will be believed and their abusers will be confronted, regardless of their ranking? By challenging abusers who hold authority in our organizations, families and communities, we prioritize the safety and health of our young over peer approval and the comfort of "getting along."

Whether or not Long actually committed the acts of which he was recently accused, this much is true: He is assuredly guilty of engendering fear and hatred of LGBT people among thousands. He has convinced countless numbers of gays that they are sinners whose salvation rests on becoming "reconditioned" into heterosexuality. Such toxic teachings reinforce the stigma that compromises HIV-prevention efforts as well as our mental and physical health.

One who cannot face aspects of himself that he despises will train that animus on another whom he regards as his opposite. Did he sell out countless individuals in order to throw congregants off the scent of his own hunt, the exploitation of young men? Was there a point when, at first, a few and then many knew what was happening and said nothing? How long will we enable the abuse perpetrated in word and deed by our pastors? When will we dare to speak the ugly, inconvenient truth even when we are afraid?

This story of this sullied bishop serves overdue notice to Christians across the nation who have bought and sold snake oil presented as holy water. It is a foreclosure warning to every black male pastor who deems the church his castle, and the women, gays and young who build it as no more than chattel to serve his appetites. It is a subpoena, a calling to account for all black men who endorse patriarchy as the most legitimate form of power in our communities. It is a stained diary page brought to light. It is truth. Amen.