Accessibility links
Post-Recession, A 'Freakonomics' Without Its Spark Mostly faithful to the hit-or-miss best-seller but with some interesting additions, Freakonomics is a visually creative overview of the authors' argument. It's unlikely to convert skeptics, however -- and its premise has lost appeal in recent years.

Post-Recession, A 'Freakonomics' Without Its Spark

Post-Recession, A 'Freakonomics' Without Its Spark 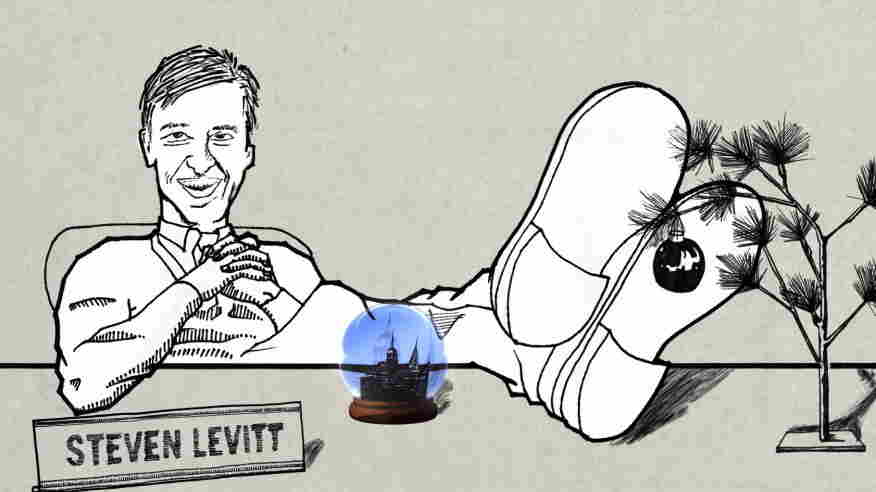 The directors of Freakonomics mix things up by incorporating cartoons (above, of the book's co-author Steven Levitt, who argued that incentives are the key to understanding economics) and illustrative tableaux. Magnolia Pictures hide caption

'Let The Economist Handle This'

A scattershot adaptation of a hit-or-miss book, Freakonomics offers a brisk and visually inventive treatment of the best-selling 2005 attempt, by economist Steven Levitt and writer Stephen J. Dubner, to explain "the hidden side of everything." But the movie's verve won't convert skeptics of the pop-economics blockbuster.

Levitt's emphasis, Dubner writes, is "how people get what they want." (He's less interested in why people want what they want.) He analyzes incentives, not all of them financial, to determine which work and which don't -- and which ones actually encourage something other than what was intended.

The book doesn't have a central thesis or narrative, and neither does the movie. The latter, put together by a handful of directors, is divided into four chapters and several vignettes, most of them basically faithful to Levitt and Dubner. The best episode, however, follows an experiment that is not chronicled in their text. The film opens with a little background, directed by Seth Gordon (The King of Kong) and featuring Levitt, Dubner and some 'toons. Then comes Morgan (Super Size Me) Spurlock's "A Roshanda by Any Other Name," riffing playfully on the authors' discussion of the effect of "black" names on long-term success. Spurlock includes material that is not in the book but doesn't tinker with its thesis.

Neither does "It's Not Always a Wonderful Life," directed by Why We Fight's Eugene Jarecki and illustrating Levitt's controversial claim that the U.S.'s legalization of abortion in the 1970s led to declining crime in the 1990s. Jarecki wittily employs clips from It's a Wonderful Life to assert that fewer unwanted children means fewer lawbreakers, and as in the book, this argument seems plausible but overstated. (One possible crime-rate factor that is not mentioned: the decrease in lead poisoning among American kids during the same period.)

Heidi Ewing and Rachel Grady, who directed Jesus Camp, wisely decided not to adapt one of the book's chapters. Instead, their "Can You Bribe a Ninth Grader to Succeed?" observes an experiment run by University of Chicago economists (including Levitt) at a nearby high school. This is the only segment that begins without a foregone conclusion, and thus is the most interesting. The episode, whose results are ambiguous, challenges Levitt's motto: "Incentives matter." 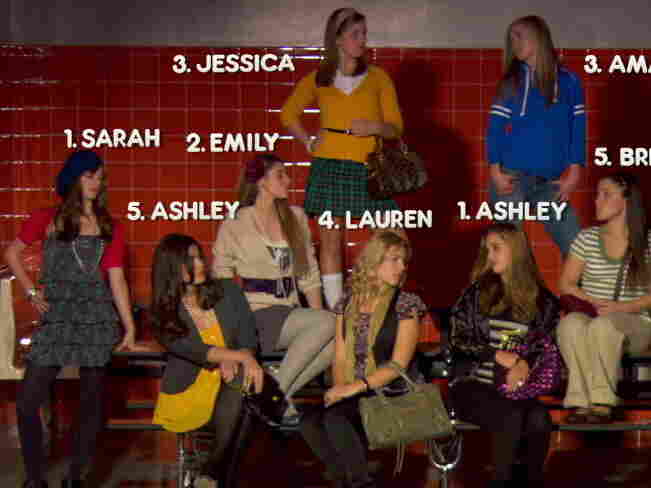 In one of its specifically book-derived segments, Freakonomics looks at the economics behind choosing names, and at how middle-class names filter into the working class. Magnolia Pictures hide caption

The movie's flashiest installment, "Pure Corruption," is also the most problematic. Director Alex Gibney, an Oscar winner for Taxi to the Dark Side, begins with Freakonomics' discussion of sumo wrestling but travels well beyond the book. Levitt demonstrated that wrestlers who have already won enough matches to retain their status intentionally lose to cohorts who might otherwise be downgraded. Levitt and Gibney call this cheating, but Japanese observers might say that it's simply maintaining group harmony. (There's no evidence that the wrestlers fix bouts for cash bribes.)

Pressing the point that the sport is "corrupt," the movie notes that sumo can be violent toward defectors and brutal to trainees and other underlings. Yet many macho clans, from boot camps to college fraternities, are cruel to new recruits. This may be wrong, but it doesn't really have anything to do with throwing matches.

Gibney then attempts to link sumo wrestling's insular culture to the Wall Street worldview that produced Lehman Brothers and Bernie Madoff. He neglects to name two other defining figures of the pre-2008 boom years: Steven Levitt and Stephen J. Dubner. Freakonomics' commercial success reflected the once-fashionable notion that economics could explain, well, everything.

After two years of recession and weak recovery, that idea has lost its appeal. So the movie version of Freakonomics functions as a reasonably effective trailer, but for a book whose moment has already passed.