Accessibility links
Begging Ban Meant To Protect Exploited, Hurts Senegal's Poor The government cracked down on public begging after a report found thousands of children forced to beg, many by their religious teachers. But with little formal employment and a virtually nonexistent welfare state, many in the impoverished West African country have little choice but to defy the ban. 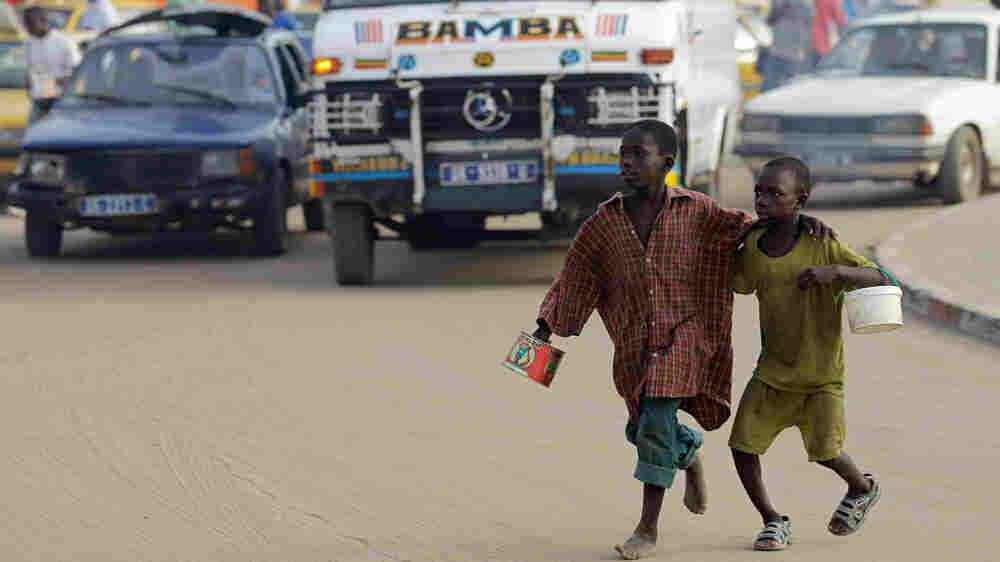 A Quranic student whose legs are bowed from polio (right) is helped across a busy street by a fellow student, as they beg to meet the daily quota imposed by their teacher in Dakar. Senegal's government recently announced that it was stepping up its campaign against begging in the streets of the West African nation. Rebecca Blackwell/AP hide caption 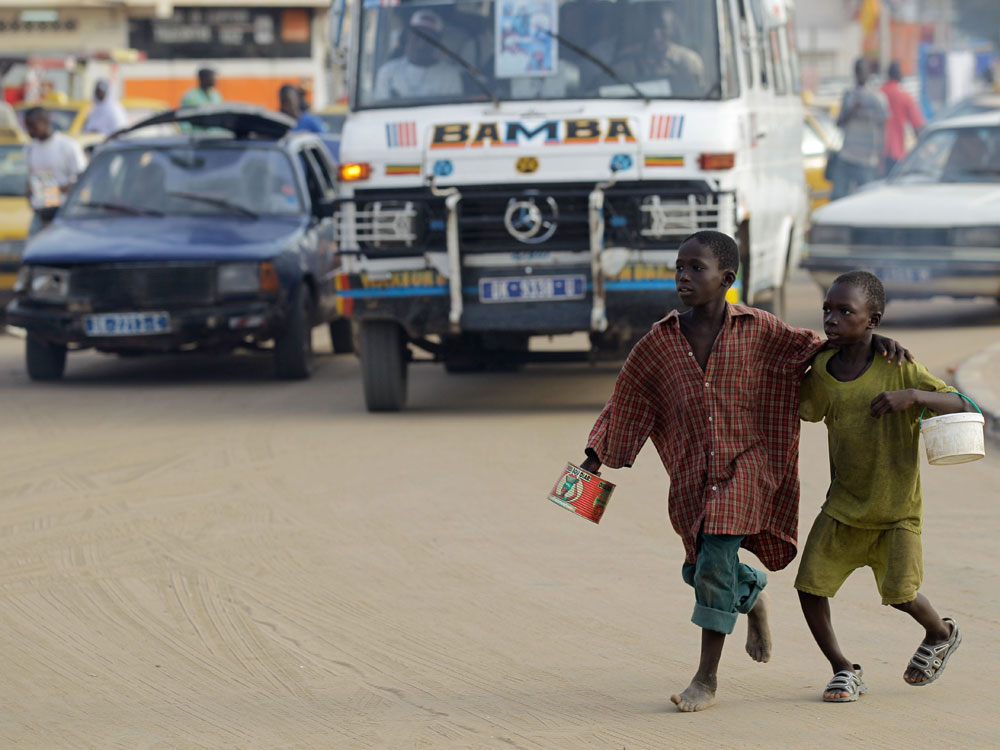 A Quranic student whose legs are bowed from polio (right) is helped across a busy street by a fellow student, as they beg to meet the daily quota imposed by their teacher in Dakar. Senegal's government recently announced that it was stepping up its campaign against begging in the streets of the West African nation.

Senegal's capital Dakar is a lively and colorful city with, until recently, an army of beggars on the streets -- both children and adults.

Many of the beggars in the metropolis have disappeared, at least for now, after the government began enforcing a 2005 ban on public begging, except near mosques and other places of worship. The crackdown came in August under international pressure, after a Human Rights Watch report estimated that tens of thousands of young boys are forced to beg on the streets.

In September, for the first time, the courts in Senegal applied another 2005 law against forcing minors to beg. A number of religious teachers were found guilty of the practice and were given suspended prison sentences and fined.

The issue is causing something of a social storm in Senegal, a majority Muslim country of 12 million where begging -- and giving alms -- are commonplace. 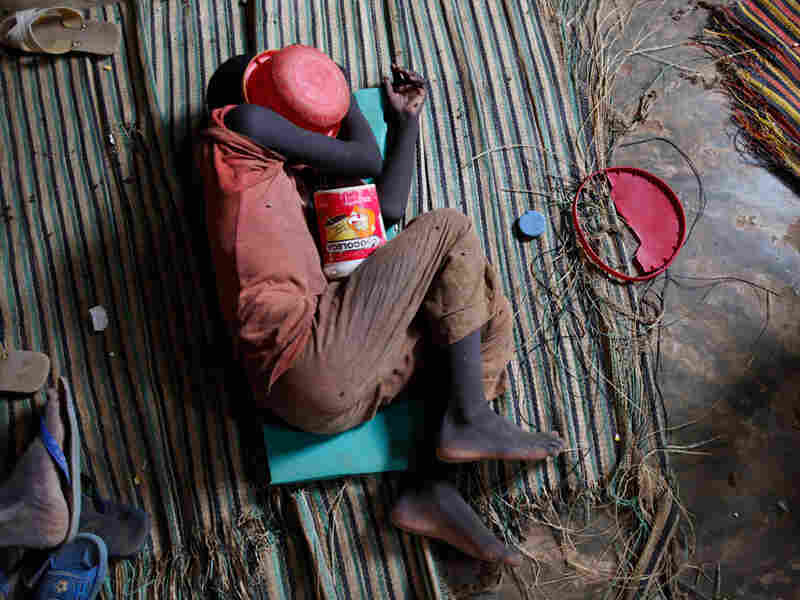 A Quranic student sleeps, with his begging bowl covering his face, on the unfinished first floor of a building that serves as both classroom and living space for his school in Dakar. Rebecca Blackwell/AP hide caption 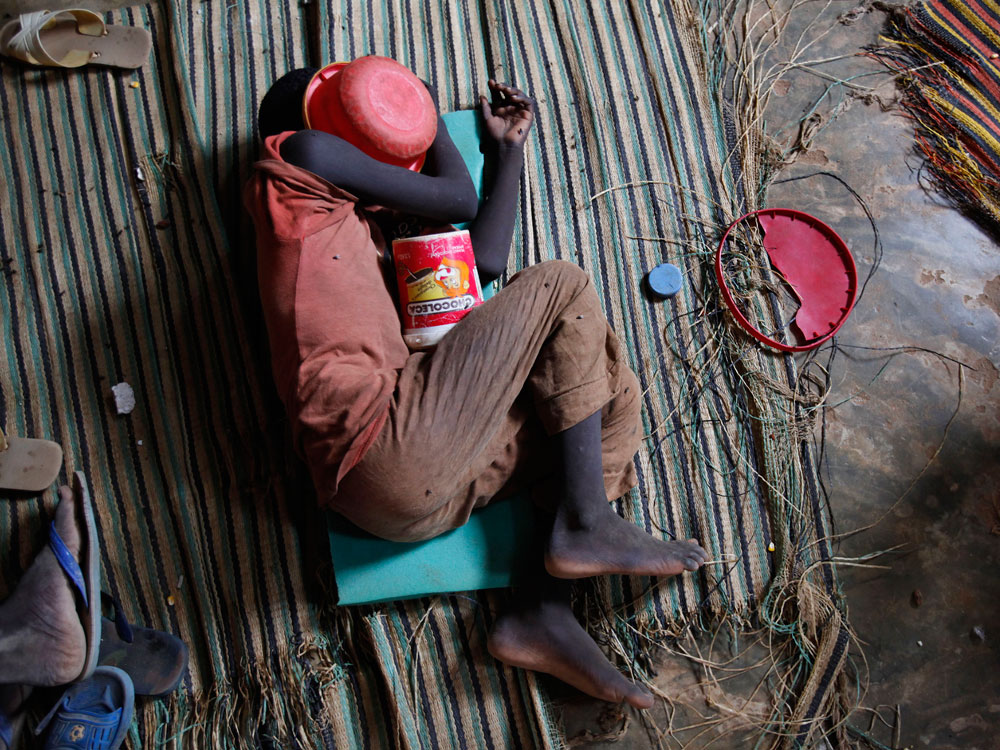 A Quranic student sleeps, with his begging bowl covering his face, on the unfinished first floor of a building that serves as both classroom and living space for his school in Dakar.

Police have been rounding up beggars, clearing them from downtown Dakar. Suddenly, one of the most familiar sights in the West African city has virtually vanished: the taalibe. Swarms of barefoot boys, dressed in filthy rags, clink coins in their trademark tomato cans begging for money.

The taalibe are supposed to be disciples, learning the Quran and humility at the residential religious schools, known as daaras. But they spend their days running up to car windows and pedestrians, hands outstretched with a murmured prayer, hoping for lumps of sugar, cookies and especially coins.

In some cases, their earnings go straight into the pockets of unscrupulous marabouts -- the religious teachers to whom parents entrust their children.

Critics say the beggar boys -- some as young as 5 or 6 -- who do not deliver a daily quota of money face brutal beatings and other abuse from their supposed guardians. Many marabouts, who serve as de facto guardians for taalibes, conscientiously carry out the important tradition of providing children with a religious and moral education.

But in many other daaras, especially in urban areas, marabouts use education as a cover for economic exploitation of the children in their charge. The children often spend four times as many hours begging as they do on Quranic studies, and Islamic scholars in Senegal have described boys leaving these schools after five or more years without having memorized the Quran.

Breaking with legal precedent, on Sept. 8, a Senegalese court handed down six-month suspended jail sentences and $200 fines each to seven religious teachers. They were convicted of forcing taalibe to beg on the streets and warned that they would be imprisoned if this happened again.

El Hadj Abdoulwahab Saidi, the chief imam of Fass Mbaw, a neighborhood on the outskirts of Dakar, says he speaks on behalf of Quranic teachers from the area of southern Senegal where the convicted marabouts come from. He says that while the teachers respect the law, the custom of Muslim religious schools and education dates back centuries and must continue. Disciples soliciting alms so their teachers can feed and clothe them is part of the tradition.

"We don't have any problem with the law," says Saidi, "but we're asking the government to give funds and subsidize Quranic schools, just as it does the Western educational system in Senegal. If the government is prepared to do this, that's fine by us. But if not --"

The implied threat in the imam's unfinished sentence is that the beggar boys may return to the streets.

Matthew Wells, a West Africa researcher with the group, wrote the report and attended the sentencing of the religious teachers in court in September.

We don’t have any problem with the law, but we’re asking the government to give funds and subsidize Quranic schools, just as it does the Western educational system in Senegal. If the government is prepared to do this, that’s fine by us. But if not —

Wells says the Senegalese government also must ensure that the children who have been taken off the streets are returned to their parents and families, and that the Quranic school system is regulated.

Wells acknowledges that hundreds, if not thousands, of Quranic teachers take seriously their responsibility of providing a religious and moral education to children. But he says that the phenomenon of thousands of child street beggars, who are meant to be acquiring a Quranic education, tarnishes the image of the religious school system in Senegal.

"These kids, and we've found that this touches at least 50,000 kids, and the vast majority under 12 years old, are living under deplorable conditions that amount to a modern form of slavery," Wells says.

Human Rights Watch warns that with the lack of regulation of the religious schools, and the flood of taalibe entering Senegal from neighboring countries, "there's been a twisting of religious education into economic exploitation by a significant number" of supposed religious teachers. The parents of children in even poorer countries such as Mali and Guinea Bissau send their children to Senegal, believing they will be given a good religious education, fed, clothed and housed by a marabout, free of charge.

A Complicated Matter Of Conscience

The Senegalese are conflicted about the ban on beggars. Social commentator and blogger Hamadou Tidiane Sy, editor of the website ouestaf.com, says in predominantly Muslim Senegal, people are taught to follow their religion and their conscience and to give to the poor. He says it is part of the culture. 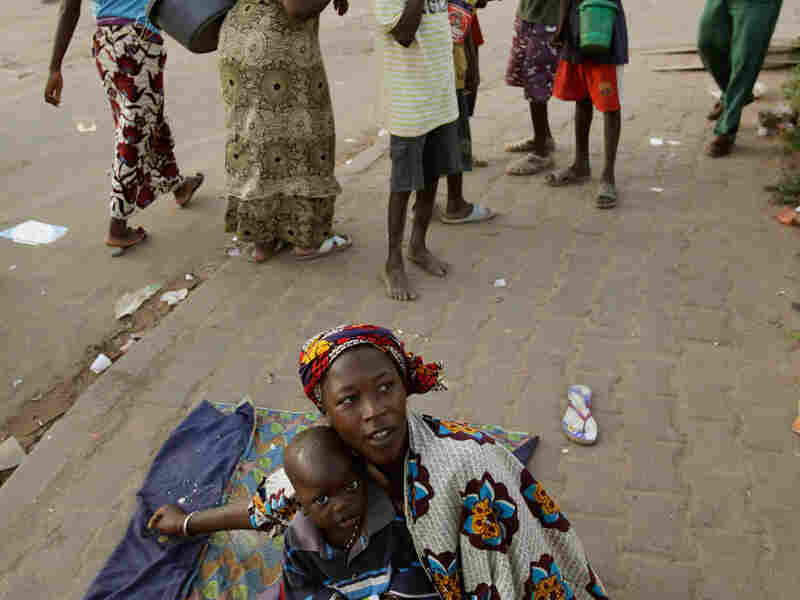 A Senegalese woman who says health problems prevent her from working holds her young son as she waits for handouts beside a busy traffic circle in Dakar. Rebecca Blackwell/AP hide caption 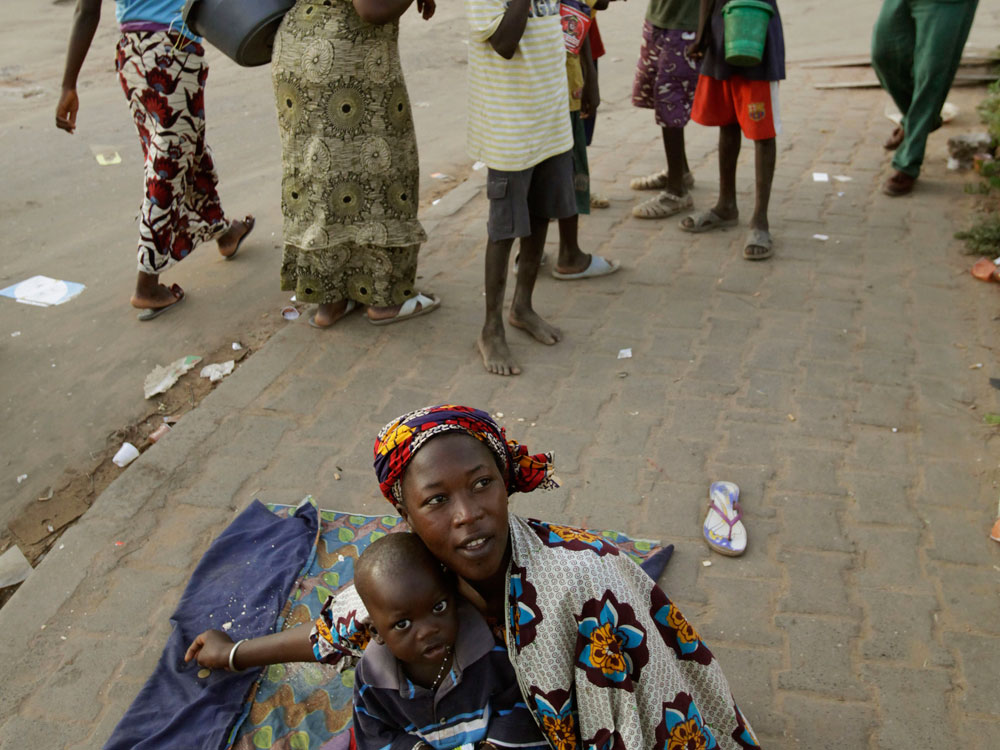 A Senegalese woman who says health problems prevent her from working holds her young son as she waits for handouts beside a busy traffic circle in Dakar.

"One, you have this sense of solidarity, this sense of sharing that Muslims are taught to have toward people in need in general," Sy says. "And then you have extreme poverty, because we are in a society where you don't have social security, a good welfare system. So welfare has always been informal. This has always been the social welfare system here."

He adds that when this tradition is transferred to an urban setting -- such as the streets of Dakar -- "where you don't know who is in need and who is not and where those in need have to go out to beg, it creates the phenomenon we have here," and people lose face and dignity.

The other important element is outside influence. Sy, and many others, note that the Senegalese government is likely ordering the police to round up beggars, especially children, because of growing pressure from abroad -- including the U.S. -- rather than out of pressing political conviction.

Prime Minister Souleymane Ndene Ndiaye said as much when he announced the ban on begging at the end of August. He noted that aid-dependent Senegal was "under threat" from its partners.

"Senegal is under threat from [international] partners who believe we are not doing enough to tackle the trade in people trafficking," said Ndiaye, about evidence that children were being transported from across the region to beg in Senegal.

Opponents of the crackdown say that, with little formal employment in Senegal and a virtually nonexistent welfare state, many people have no option but to beg.

Regardless of government policy, many beggars -- including 47-year-old Fatou Ndour, who is blind -- say they have no choice.

Ndour says the money she earns begging helps to look after and educate her eight children. She says she'll brave police raids and the government ban, because otherwise her family will go hungry.