Accessibility links
Movie Review - 'The Social Network' - Fact Or Fiction, It's A Tangled Web The Social Network may or may not reveal the inner life of Facebook founder Mark Zuckerberg, but it tells a great story. Director David Fincher creates a thriller out of a tale about business ethics among back-stabbing computer geeks, and the result may end up being the best picture of the year. (Recommended) 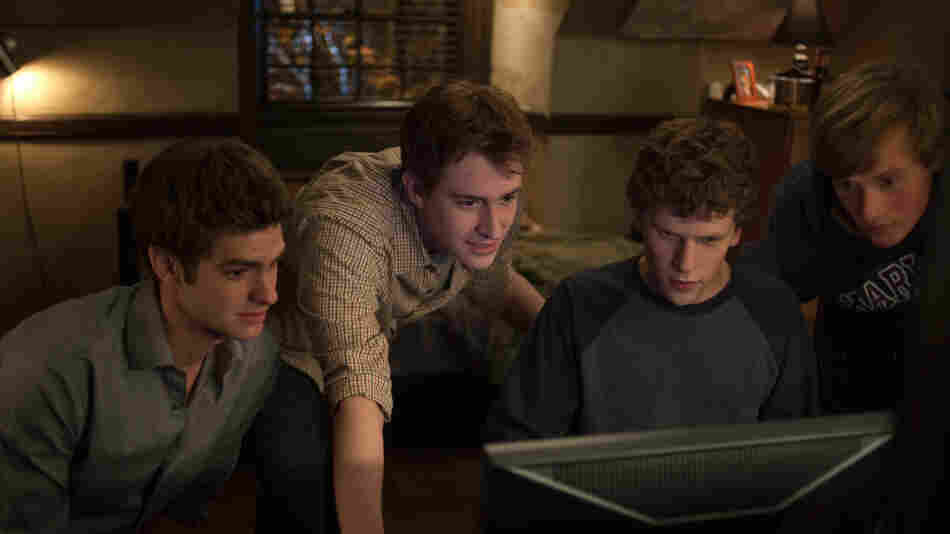 PG-13 for sexual content, drug and alcohol use, and language

'People Don't Walk Around With Signs'

'I Don't Hate Anybody'

A week ago, Facebook founder Mark Zuckerberg gave the Newark, N.J., school system $100 million on the same day the movie The Social Network opened at the New York Film Festival. The speculation was that he was trying to burnish his reputation before the movie tarnished it. The film opens across the country today, so ... let the tarnishing begin.

The story of how Facebook was invented, almost accidentally, in a Harvard dorm room should have been near-impossible to film -- computer geeks, code-writing, legal depositions. But boy does it click along, from the moment Zuckerberg (Jesse Eisenberg as a cold-eyed, awkward boy genius) decides to get back at a girlfriend who dumps him during the opening credits. Zuckerberg's revenge? He hacks some school photo archives and enlists his best buddy in a dumb, sexist online stunt: They start using complicated mathematics to rank the girls at school.

Their hot-or-not prank gets so many hits, it crashes Harvard's server, and the dweebs are briefly campus celebs. Zuckerberg is still obnoxious, though, and devious, too: When he's approached to work on a socializing website for a couple of golden-boy jocks, he stalls and tries to develop one of his own. But it's all just names and pictures until a roommate comes to him one day with a question that gives Mark a moment of inspiration: The website needs to do something.

Mark is out the door so fast, he doesn't even realize it has snowed until his socks and sandals are ankle deep in the stuff. It's a throwaway moment, but the kind that says worlds about the character's mindset. When people talk about mesmerizing speakers, they often say they'd be happy to listen to them reciting the phone book. Let me just say I'd be happy to watch David Fincher directing the phone book.

With scripter Aaron Sorkin providing the verbal fireworks, Fincher tags and pokes his way through an almost Shakespearean thicket of betrayals and double-crosses. (You expect a Facebook movie to be about friending?) Think again: Zuckerberg's co-founder, who is given an almost visible conscience by Andrew Garfield, spars with Napster's creator (played as a snake in the digital grass by Justin Timberlake). Both of them think the cold fish whose approval they're fighting over actually gives a damn, but his thoughts are ever elsewhere, and sooner or later, almost everyone who meets him can't stand him, perhaps especially the Winklevoss twins -- the jocks who originally asked him to work on their campus-socializing site. 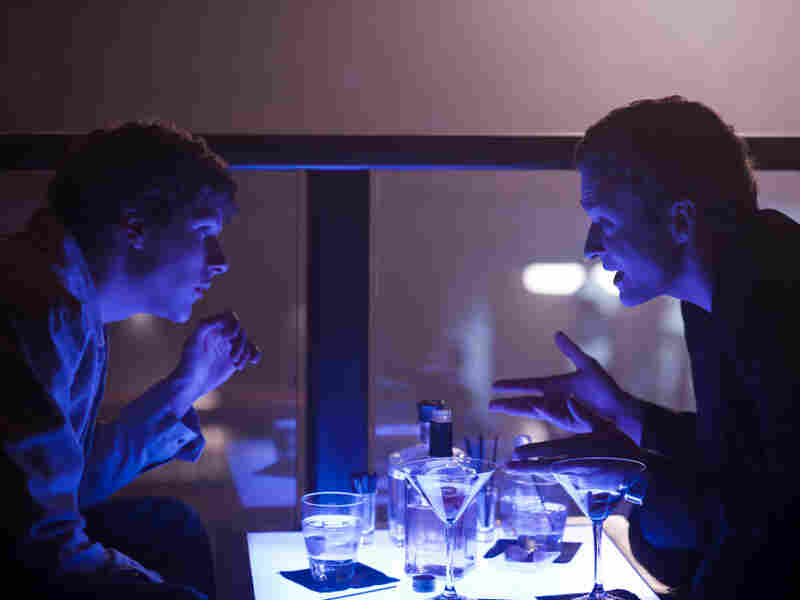 Though the film conforms to the general contours of the public record, there's a good deal of fictionalizing going on in The Social Network. For example, that girlfriend who dumps Zuckerberg in the opening, to start things rolling? Made up. The real Zuckerberg and his fellow gazillionaires wouldn't talk to director David Fincher and his team -- probably a good thing for the filmmakers, as it frees them to invent character traits and motivations. It's less good for the gazillionaires, even if they can afford to buy respectability back, but hey, that's entertainment.

And The Social Network is terrific entertainment -- an unlikely thriller that makes business ethics, class distinctions and intellectual-property arguments sexy, that zips through two hours quicker than you can say "relationship status," and that'll likely fascinate pretty much anyone not named Zuckerberg.

Oh, and it's one that sends you out of the theater buzzing, breathless and eager to tell all of your friends, and friends of friends, that you've just seen what might end up being the best picture of the year. (Recommended)