Accessibility links
Life After Foreclosure: Coping With Bad Credit The number of people with damaged credit because they could not pay their home loans keeps growing.  Millions have gone through a foreclosure or a short sale, when the property is sold for less than the balance due on their mortgage. Beyond the financial impact, borrowers say they feel stigmatized by low credit scores. 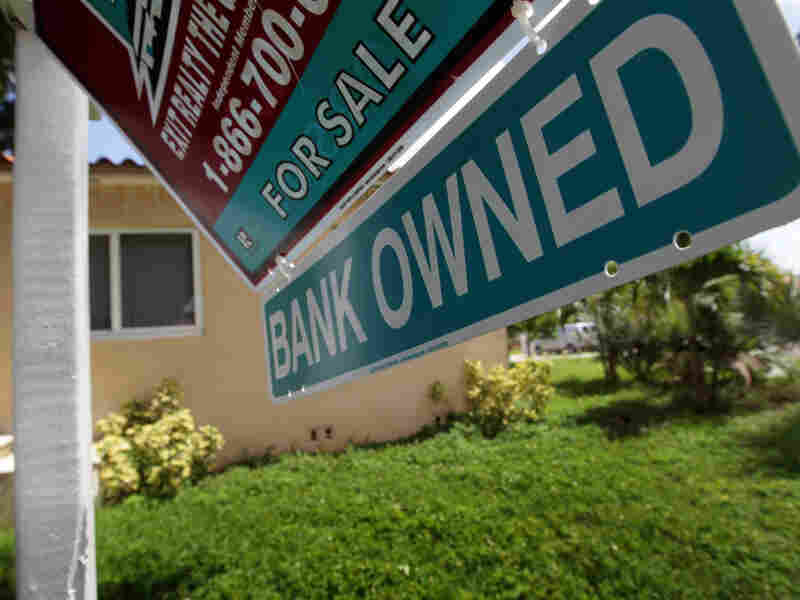 A "bank owned" sign is posted in front  of a foreclosed home in Miami. Borrowers trying to rebuild their lives after foreclosure say there's a stigma attached to having a low credit score. Joe Raedle/Getty Images hide caption 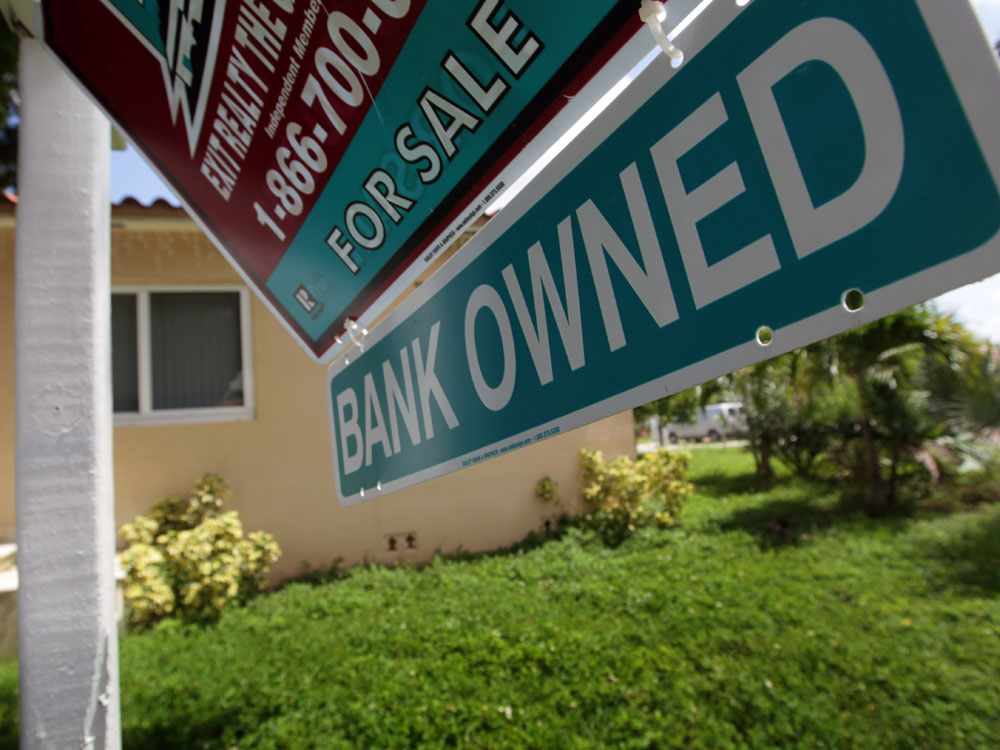 A "bank owned" sign is posted in front  of a foreclosed home in Miami. Borrowers trying to rebuild their lives after foreclosure say there's a stigma attached to having a low credit score.

Losing a house through foreclosure or short sale is, among other things, very bad for a borrower's credit.

Yet the number of people who have damaged credit because they could not pay their home loans keeps growing. Since the start of 2007, nearly 2.8 million homeowners have gone through what is broadly referred to as a "distressed sale," according to research firm CoreLogic.

So far, there are no quantitative studies gauging what happens to these people after they lose their homes. Researchers are only now starting to study the social and economic impact for those recently marginalized in the credit economy.

Melissa Moore never anticipated finding herself among this growing population.  In the space of the past five years, the 41-year-old attorney and mother of two went from being a landlord to being at the mercy of them.

Moore's fate turned after she bought one home -- then another after getting married -- in Phoenix, the epicenter of the housing bust.

She didn't foresee that prices would fall by two-thirds. And when she got a job offer in Boston, she felt she had no option but to short-sell the homes, paying the bank far less than the mortgages were worth.

"My credit is below abysmal," says Moore, who now lives in Beverly, Mass. "It was never like that before. I mean, those mortgages I had -- I was able to get [them] because I had really good credit."

Her housing choices turned out to be bad investments, but Moore says she has otherwise made responsible financial choices. Yet anywhere credit becomes an issue, Moore feels like her 480 credit score marks her. She recently tried and failed to refinance a small loan on her car.

"I'm at the dealership with people significantly younger than I am, you know, sort of looking at me funny because my credit is so bad," Moore says. "It's humiliating to be in this position."

Others in a similar position say they often have to pay higher premiums on insurance, lose access to credit cards, or cannot get a car loan. Some also say they worry that employers might use damaged credit scores against them in a job interview. According to a recent survey by the Society for Human Resource Management, 47 percent of employers ran credit checks on select job candidates.

More On The Housing Crisis

Critics say using credit as a screening tool penalizes those already affected by the recession. A bill in Congress proposes prohibiting employers from the practice.

To be sure, there are people who remain relatively unaffected after losing their home. Some even say they had no trouble getting a new home or car loan, though they appear to be the exception.

People like Steve Pacheco are far more typical. Pacheco's story began with his wife losing her job early last year. He asked the bank to modify the mortgage on his Chicago-area home.

"Basically they told us to stop making payments, and they might be able to work out a modification for us. In hindsight, that was the worst possible thing to do, since we ended up in the foreclosure process," Pacheco says.

His credit plummeted from 750 to 500, which made him unwelcome in most rental offices.

"I tried to work deals, saying, 'Hey, we'll double the security deposit. Or we'll sign on for a two-year lease right now if you're looking for somebody,' " he says. "It didn't seem to matter. As soon as they heard 'foreclosure' or saw my credit report, that was it for them, they weren't willing to work with us."

Pacheco and his wife ultimately had no choice but to rent a friend's old house. Because it was farther away from work, they needed another car, which they were only able to get after paying a high premium and 20 percent interest on a used clunker.

Stigmatized By A Number

Pacheco says in addition to his confidence and his credit, he lost sleep and even social support during the process.

"Through the whole thing, there were people I told I moved because I sold my house," Pacheco says. "Even though that's kind of true, that's not the whole story. And I kind of I feel like I'm not being 100 percent honest with them, and it tears me up a little bit."

Pacheco says he feels he's stigmatized because of the number attached to his name. But because there are so many others who've met a similar fate, he hopes maybe that will lessen over time. He says by speaking about his experience now, perhaps landlords might be listening. And maybe they'll be more willing to look beyond the credit score.

On Tuesday, in part two of the series, NPR looks at how the large number of foreclosures is forcing some to change the way they think about evaluating borrowers with bad credit.

Remedy For Foreclosures Has Economists Divided Sept. 27, 2010
What Financial Overhaul Means For Consumers June 29, 2010
Walking Away From Your Mortgage Jan. 14, 2010