Accessibility links
Questions Have Long Surrounded Accused Minister The recent problems plaguing Bishop Eddie Long are not the first he has encountered since taking the pulpit of New Birth Missionary Baptist Church in Georgia. 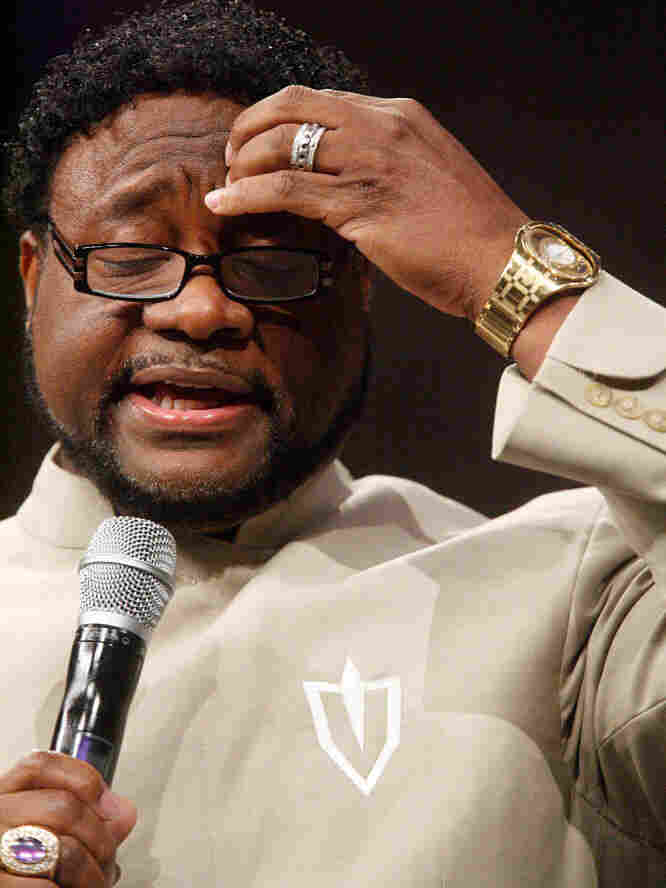 Bishop Eddie Long, pastor of a Georgia megachurch, has been accused of luring young men into sexual relationships. He told his congregation on Sunday that all people must face "painful and difficult situations." John Amis/AP hide caption 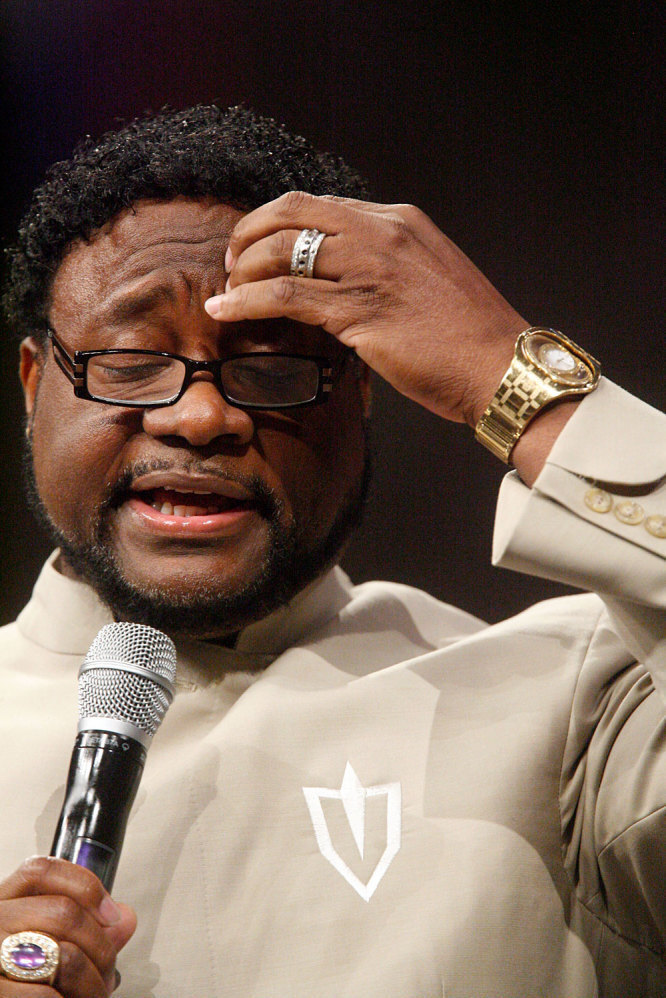 Bishop Eddie Long, pastor of a Georgia megachurch, has been accused of luring young men into sexual relationships. He told his congregation on Sunday that all people must face "painful and difficult situations."

When he stepped to the pulpit and faced some 8,000 congregants on Sunday, Bishop Eddie Long said he wanted to preach on handling "painful and difficult situations." And it is likely that the pastor of New Birth Missionary Baptist Church in Lithonia, Ga. -- who started from practically nothing and is now a millionaire -- has never encountered troubled waters like these.

Long is facing allegations that he sexually abused four men who received his mentorship as a "spiritual daddy." Three of the men were older than 18, but one said he was 17 at the time of the alleged abuse. They allege that Long encouraged them to join the church's elite youth group, so he could groom them for sex; in exchange, they allege, Long gave them money, new cars, housing and took them on exotic trips.

On Sunday, Long vowed to fight the accusations, although his defense was vague and left some congregants puzzled and concerned.

"I have never portrayed myself as a perfect man," he told his church Sunday. "But I am not the man that's being portrayed on the television. That's not me."

He said his lawyers have advised him "not to try this case in the media," adding, "I feel like David and Goliath, but I've got five rocks and I haven't thrown one yet."

'Name It And Claim It'

Eddie Long has overcome challenges in the past. When he took over the church in 1987, it had 300 members. Now, the stadium-style church boasts 25,000 members and occupies 240 acres east of downtown Atlanta. It runs charities, businesses, and even houses a fitness center. New Birth is a must-stop for politicians seeking office, and it hosted the funeral for Coretta Scott King in 2006.

Long is one of the most influential black preachers in the country and abroad. His sermons are televised in 170 countries, and he routinely meets with celebrities and political leaders (both Democrats and Republicans).

Long's church and his personal life are manifestations of the "prosperity Gospel" he preaches. Also called "name it and claim it," this style of preaching states that God does not want you to be poor -- indeed, Long preaches that Jesus was not poor -- and that riches are a sign of God's blessing.

Long himself drives a $350,000 Bentley, bought a $1.1 million home in 2005 and favors gold necklaces and Rolex watches. When the Atlanta Journal-Constitution asked him about the $3 million he received from the church and its charities between 1997 and 2000, Long was defiant.

After that, he hired a public relations firm and opened several charities.

In 2007, Long's wealth attracted the attention of Sen. Charles Grassley (R-IA), who requested the financial records of Long and a number of other wealthy religious leaders, including Joyce Meyer and Benny Hinn. At first Long refused, claiming this was a violation of the separation of church and state, but later a Senate aide said Long had agreed to cooperate.

As of last year, a Senate aide said that they were still waiting for all of Long's records.

There is an irony to the sexual allegations by the four men. Long, like many conservative black preachers, has openly condemned homosexuality.

In 2004 he led a march in support of a constitutional amendment to define marriage as a union between one man and one woman. His church holds "sexual reorientation" conferences, which are aimed at "curing" gay men and lesbians. A 2007 article in the Southern Poverty Law Center's magazine called him "one of the most virulently homophobic black leaders in the religiously based anti-gay movement."

The allegations recall the scandal of Ted Haggard, a megachurch pastor and former head of the National Association of Evangelicals. Haggard often talked of homosexuality as a sin, until he admitted having sex with a male prostitute in 2006. He resigned from his church and the NAE in 2006.

Unlike Haggard, however, Long answers to no denomination. His church is independent, and no one can force him to resign. His fate will most likely be determined in the courts and by his membership. On Sunday, many of his congregants seemed to support him, cheering and clapping as he spoke.

But among believers who read his sermon online, the reviews were mixed.

"This man is a LIE," one person commented about the sermon.

Another wrote that she had been contemplating joining the church because of Long's charismatic style. "But I realize that it was all an act, show, smoke and mirrors just to gain money and popularity."

But others said it was inappropriate to be "judge and jury" until all of the facts come out.