Accessibility links
Eric Owens: Singing Grendel, Death And A Troll Owens is a up-and-coming name in the world of opera. His latest performance in the Metropolitan Opera's production of Das Rheingold has generated excitement and expectations for the versatile performer. 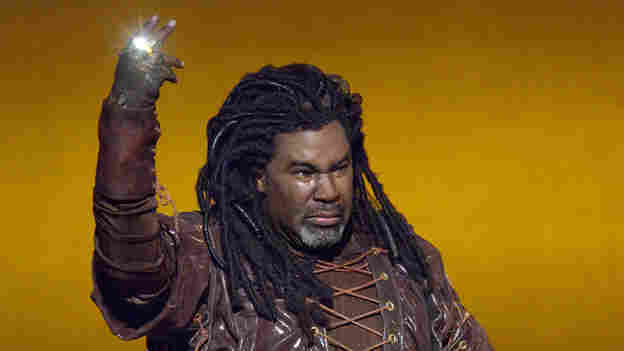 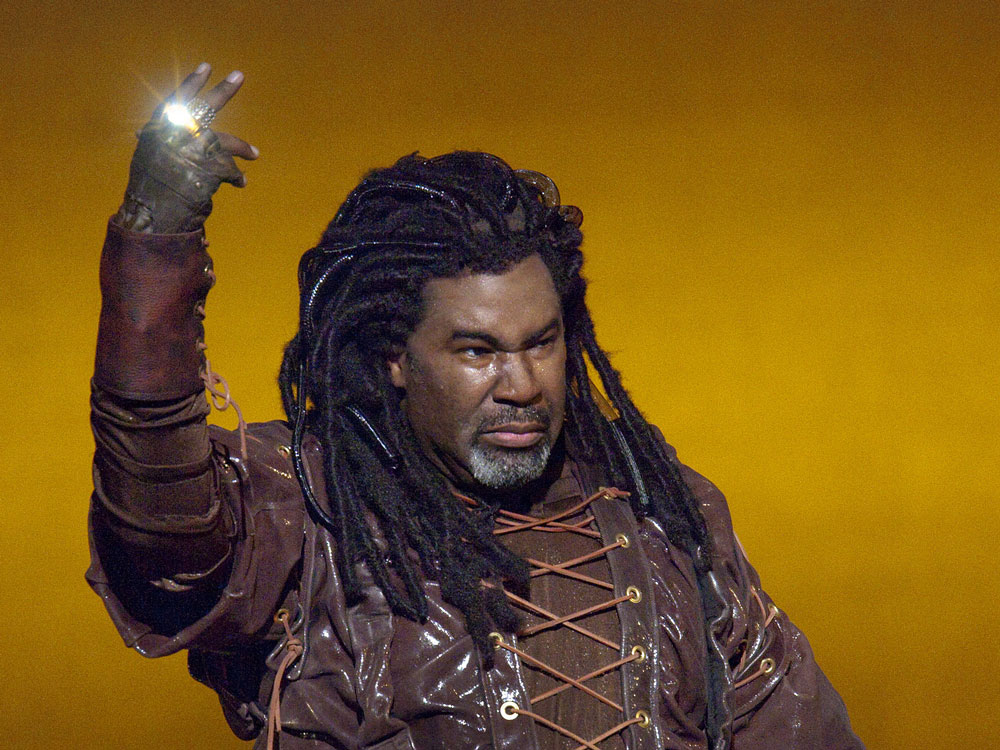 The Metropolitan Opera kicks off its season Monday with Richard Wagner's Das Rheingold, the first installment of a new $16 million Ring Cycle, featuring opera superstars Bryn Terfel and Stephanie Blythe. One of the pivotal roles in Wagner's opera, the troll Alberich, will be played by American bass-baritone Eric Owens. He may not be a household name, but he's one of the most sought-after singers in the business.

The casting indicates his versatility as a singer. He has performed in well-known classical works, like the Mozart Requiem, as well as freshly minted operas like Grendel. Owens says he doesn't want to be pigeonholed.

"It's weird," he says. "I mean, it can be a good thing, it can be a bad thing, careerwise, because I'm not necessarily known for one particular thing. But at the end of the day, I need to do what makes me happy."

"Forget about singers; if you talk about all musicians, there are very few people who are as well-schooled and as widely talented as Eric," Gilbert says. "He's really someone who, I think, goes to the heart of the matter. And he comes not only prepared, but really understanding the music."

Perhaps his talents owe something to his instrumentalist upbringing: Music has been Owens' passion since grade school. He grew up in Philadelphia, where he still lives, and was already playing oboe professionally in high school. But it was also in high school where he found he could sing -- really sing.

"This may sound funny, but I saw more career potential in singing than being an oboe player," Owens says. "As competitive as the opera world is, there's always a job to be had somewhere -- and, you know, there are companies who always need people."

Pulitzer Prize-winning composer John Adams says that background as an instrumentalist is part of what makes Owens such a superlative musician.

"He’s got this special past, where he really knows what it means to be in an orchestra, to count, to listen for pitch," Adams says. "His fundamentals -- his musical chops, as we call it -- are so secure."

The Singer As Collaborator

Adams says he was so impressed with Owens' chops that he created roles specifically for him in two operas. The first was Gen. Leslie Groves, the military head of the Manhattan Project, in Doctor Atomic, a look at the birth of the atom bomb. Adams' opera A Flowering Tree, an adaptation of a South Indian fairytale about a girl who can transform herself into a tree, featured Owens as the Storyteller.

For his part, Owens says he's relished collaborating with the composer.

"He would send some drafts and say, 'OK, is this comfortable?' " Owens says. "That's really exciting, knowing that you have sort of an effect on the outcome of this wonderful piece of music ,and that you had put your little two cents in there."

Owens says he spends eight or nine months on the road and that New York is a frequent destination. Last season, he received rave reviews when, in a two-week period, he performed the Beethoven Missa Solemnis and a staged concert of Gyorgy Ligeti's atonal opera, Le Grande Macabre, with the New York Philharmonic.

Owens is now focused on his first role in a Wagner opera. In the new high-tech Das Rheingold, directed by Robert Lepage -- whose credits run from nine-hour theatrical marathons to Cirque du Soleil in Las Vegas -- Owens plays the thieving troll Alberich.

"His voice is amazing, but he's also a good actor -- a good character actor," Lepage says. "This is a bit of a counter role, in the sense that he's probably the most sympathetic human being in this universe, and he gets to play this very pathetic, not very sympathetic character. And he actually really dives into it."

Das Rheingold is the kind of production where, when singers dive into it, they really dive -- it's very physically demanding. Owens says he's been enjoying not just the musical but also the cardiovascular challenges of the role, even if he says he's a little overwhelmed to be part of opening night at the Met.

"I have to make sure I can stay focused," he says. "And not have one of these moments of, you know, 'Wow! Look at me! I'm up here with all these amazing people doing this amazing music in this amazing theater.' "