Accessibility links
Michele Norris Reveals 'The Grace Of Silence' When Michele Norris set out to write a book about race in America, she uncovered a family secret: her father had been shot by a white police officer in Jim Crow-era Alabama. Norris and Jim Baggett, the archivist who helped Norris unlock her family's difficult past, discuss Norris' memoir, The Grace Of Silence.

When Barack Obama became the nation's first black president, some Americans argued that the United States had ushered in a "post-racial" period.

But Michele Norris, co-host of NPR's All Things Considered, felt that there were still many important conversations to be had about race in America. So she set out to write a book that would bring to light the feelings many Americans are still afraid to say aloud.

Norris never expected that she would uncover difficult secrets in her own family. Her father, Belvin Norris Jr., had been shot by a white police officer in Jim Crow Alabama -- and kept it a secret.

In researching her memoir, The Grace of Silence, Norris discovered family revelations that changed the course of her book -- and her life.

Norris joins NPR's Neal Conan to discuss her memoir, The Grace of Silence, along with Jim Baggett, the archivist who helped Norris unlock her family's difficult past in Birmingham, Ala.

Excerpt: 'The Grace of Silence' 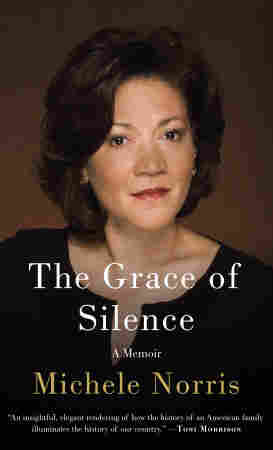 Even in the most terrifying moments at a sterile hospital, there is some comfort in knowing that a world you recognize is just outside and beyond the parking garage. You can ﬁxate on a familiar image as a doctor shaves years off your life with each sentence. He can talk all he wants about therapies and opera­tions, but you're thinking of the parking lot where you taught your daughter to drive, or the gas station that uses red reﬂective press-on letters to spell out a different Bible verse each week, like "The fear of the Lord is the beginning of wisdom." While the doctor yammers on, you're thinking of the grizzled gas sta­tion attendant who climbs the ladder to change the sign, and wondering what pearl of wisdom he might offer in light of the news you just got.

In Fort Wayne, in a large hospital in an unfamiliar city, we were confronting an unknown illness that had swiftly robbed my father of his ability to carry out the most basic functions. We were looking at complicated surgery and, at best, a long and complex recovery, so the doctors suggested that we quickly move Dad back to Minnesota, where he could be treated closer to home.

We wanted to get Dad on the ﬁrst ﬂight to the Twin Cities, but his gait was unsteady and he seemed increasingly disori­ented. He clutched my arm as we walked through the airport; he kept shooting me tight little smiles: reassurance. I wasn't buying it. By now his speech was so slurred that only I could understand him, and so labored that he wasn't able even to whisper. It took him so much effort and focus to spit out a sound that it was slightly explosive when it arrived, like a sput­tering engine in a hushed area.

At the airport we sat across from two stout middle-aged blond women with wet-set curls and matching pink satin jack­ets. They must have been on their way to a convention or a so­rority gathering; they were electric with excitement and frosted up like high-calorie confections, constantly riﬂing through their pocketbooks for mirrored compacts, then checking their makeup or blotting their lipstick. I remember them so well because they were sitting next to a large Amish or Mennonite family.

The men had long beards and wore suspenders. The women had long braids and long dresses, and their heads were covered by little white hats that looked like fancy French fry baskets. They seemed uncomfortable with the constant chatter of the satin dolls. They, too, noticed the women's prying eyes and "get a load of this" gestures, though the taciturn demeanor of the Amish rendered them perhaps slightly less interesting speci­mens than Dad and me.

When my dad tried to lean toward me to ask a question, his words sputtered forth like bricks tumbling from a shelf. The satin dolls found it hard to mind their own business. They stared and pointed every time Dad attempted to speak. They didn't try to hide their disparagement, one of them harrumph­ing loud enough for anyone to hear, "Goodness sakes, it's not even noon yet!"

After spending a lifetime trying to be a model minority -- one of the few black men in his neighborhood, at his workplace, or on his daughters' school committees -- my father now sat facing the condemnation of the two blond scolds. They had apparently concluded that he was an early morning lush instead of a gray-haired man ﬁghting a losing battle with a devastating disease.

Here is the conundrum of racism. You know it's there, but you can't prove, beyond a reasonable doubt, how it colors a par­ticular situation. Those pink satin ladies were strangers to me, so I have no idea if they would have been as quick to judge a gray-haired white man with impaired speech. However, I do know this: the fact that they were white women added mightily to my father's humiliation. I knew my father felt the sting of their judgment. I knew it because he kept pushing up his cardi­gan sleeve and futzing with his wrist, as if he'd left home with­out his Timex. But it was not the wrist on which he wore his windup watch. It was the wrist where the plastic bracelet had been afﬁxed at the hospital. His awkward gestures were a silent plea to the satin dolls to notice the hospital bracelet. My heart breaks every time I think of the look on his face that day.

The jut of his chin showed indignation, but the sag of his shoulders and the crease in his brow conveyed something dif­ferent. Something hovering between anger and shame. There was also, however, a hint of grace. I see that now that I have come to understand my father better, as a man who was always in tight control of his emotions. I believe now that he was trying not just to salvage his dignity but also to absolve the two women from dishonor. A less controlled, more impulsive man might have responded by giving those women the ﬁnger to shut them up. My father drew strength from reaching past anger.

The aphorism "Kill them with kindness" might have been penned with a man like Belvin Norris Jr. in mind. By ﬁddling with his wrist he was saying, "If only they knew," rather than "Shame on you."

Dad boarded the plane early because the ﬂight crew knew he would need extra time to settle into his seat and because they wanted to check his medical release from the hospital. He was ﬂying alone that morning. I planned to drive his Oldsmobile back to Minneapolis and meet him there the next morning, a decision I have spent a lifetime regretting. Before walking down the jetway, he motioned for the nurse and the ﬂight crew to wait a second. He leaned toward me as if he wanted to tell me something, but he couldn't get words out. He kept looking over his shoulder, aware of the ﬂight crew watching and waiting, and perhaps wondering whether the satin dolls were also taking it all in. He kissed me on the cheek, a loving but clumsy gesture. His balance was off, so it was almost as if we were bump­ing heads. I didn't mind, and I certainly didn't care who was watching as we locked in a long embrace. My eyes were closed, ﬁghting back tears, so I barely noticed when the ﬂight attendant crept into our circle of grief to gently remind us that they had to stay on schedule. The attendant lightly cupped my father's elbow and led him away. It is disturbing to see your parent treated like a schoolchild, yet amusing to watch a man grin like a lucky teenager when a pretty woman takes his arm.

As I walked away, the satin dolls gazed at me. They must have overheard the chat about Dad's medical release because now they wore pouty, ingratiating smiles. Lipstick contrition. I walked past them and smiled back. It hurts to recall my re­sponse; I, like my father, had reached beyond anger to offer conciliation instead. I had every right to throw my father's humiliation in their faces. Spitting at them was, of course, out of bounds, but at the very least I should have served up a scowl.

I should have made them squirm. I should have been the black girl that certain white women are conditioned to fear most.

I didn't do any of that. I am my father's daughter, and such caustic gestures weren't in my DNA. I was raised by a model minority to be a model minority, and to achieve that status, cer­tain impulses had to be suppressed. Years later, I understand both the reason and its consequence.

I was almost out of the waiting area when I felt someone touch my shoulder. I turned, thinking it might be one of the women, intent on apologizing, but there was no nail polish on the hand touching my arm. The hand was large and calloused, marked by raised splotches resembling coffee stains. A bearded man held my forearm; he called me "ma'am," though it sounded like "Mom." "I'll watch over your pa," he said before darting back to join his family.

I wonder what my father had wanted to tell me, but couldn't, right before he'd boarded the plane. More of his classic lunch-box wisdom? "Learn all you can" or "Save your money" or "Don't eat too much late at night"? More than twenty years later, as still I mourn, I wonder if he was trying to impart some eternal verity before his ﬁnal ﬂight home to Minneapolis. This would be the last time I saw him alert. Within a day Dad slipped into a coma. Within a week a fast-growing brain tumor took his life.