Accessibility links
A Portrait On Paper: Chernow's 'Washington, A Life' Abigail Adams said that "simple truth" was George Washington's "greatest eulogy," and Ron Chernow proves it in his captivating new biography. Chernow keeps his distance from the founding father's mythology, and instead examines his foibles and triumphs. 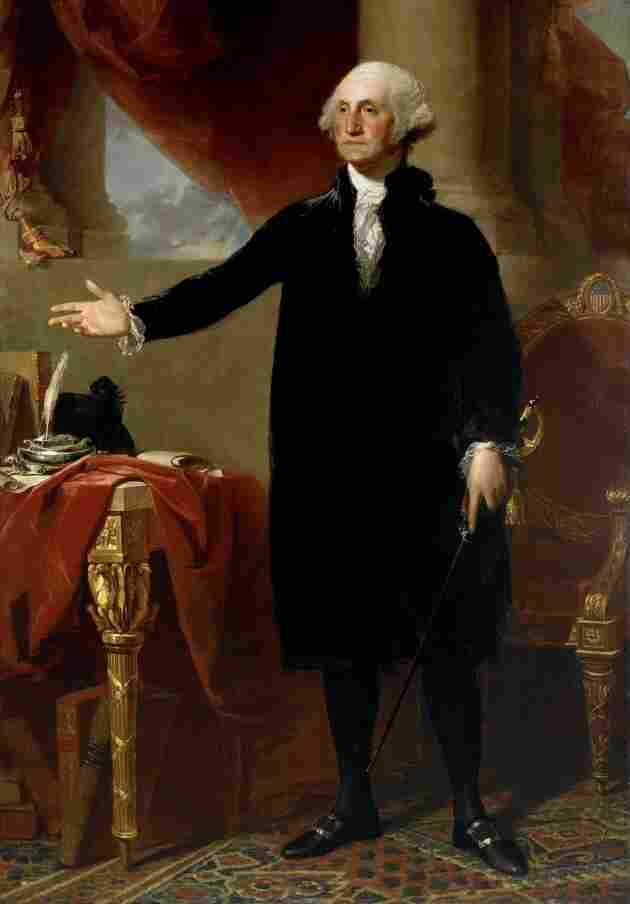 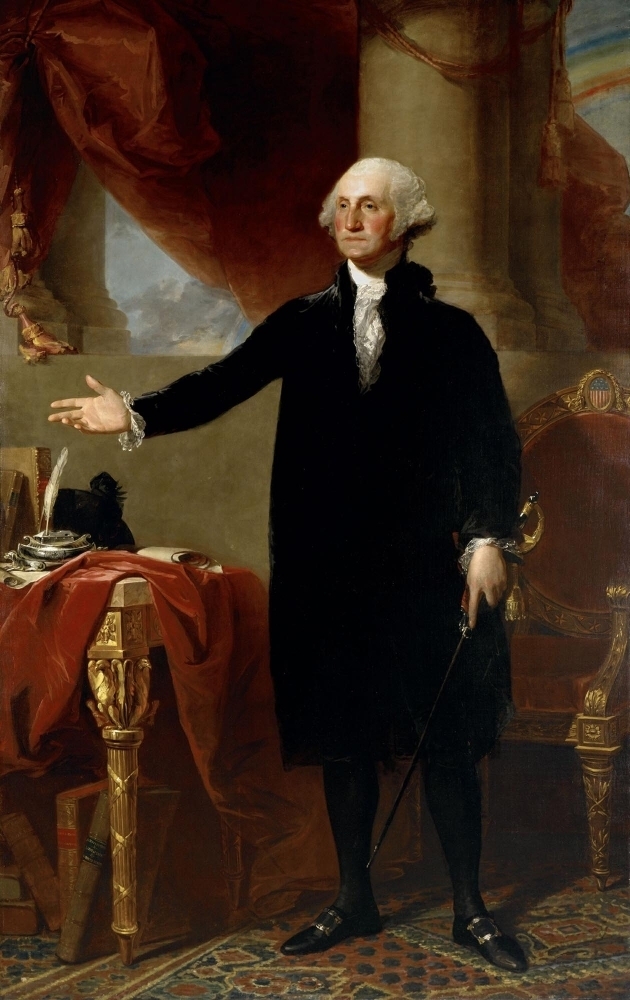 While painting one of his famous portraits, Gilbert Stuart discovered that George Washington was a different man from the cool, calm and composed figure of his public persona.  Based on Washington's facial features alone -- his deep-set eyes and the broad upper nose -- Stuart believed that Washington was "by nature a man of fierce and irritable disposition."

Never one to let his guard down, Washington resisted Stuart's attempts to get him to open up -- he believed a man should be courteous to all but intimate with few. Perhaps that explains why, in spite of numerous portraits, each likeness of Washington has made him seem more unknowable rather than revealing intimate components of his persona.

Capturing an image of George Washington on a canvas may be as difficult as describing him as a man in full on the page. While there have been numerous books written about him, few of them have given as complete a picture of our first president as Ron Chernow's compelling new biography, Washington: A Life. What helped Chernow write a book that captures Washington's essence is the close reading he did of 60 volumes of letters and diaries published as part of the George Washington Papers project, as well as numerous other works of scholarship. 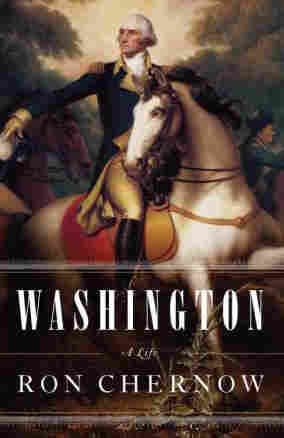 Now, before you think this is a book to shy away from -- a mere regurgitation of historical facts and transcripts of moldy 18th century correspondence -- Washington: A Life is far from that. It is a biography of Washington for the 21st century, one that examines his conflicts and foibles as well as his triumphs. It is a psychological as well as a historical portrait. Chernow makes sure the reader sees the tempestuous side of Washington that many knew lay under his calm demeanor but was revealed to only a few.

Through Chernow's narrative, the reader watches Washington transform himself from an insecure young colonel in the French and Indian War to the president of a young nation. In the progression, a large cast of characters comes in and out of the picture, providing a perspective on Washington's personal relationships and the strengths and weaknesses of his personality. Readers also get a sense of Washington's ambivalence about slavery. Chernow explains how Washington struggled with the idea of slavery, but fell back on the self-serving fantasy that it would fall away.

Washington: A Life keeps its distance from Washington mythology, and its narrative informs as much as it entertains. Starting with the book's epigraph -- "Simple truth is his greatest eulogy," a quote from Abigail Adams -- Chernow lets the reader know he wants to give an accurate portrayal of an enigmatic historical figure. In this book's pages, he does it in a way that not even the most gifted portrait artist of Washington ever could.

In March 1793 Gilbert Stuart crossed the North Atlantic for the express purpose of painting President George Washington, the supreme prize of the age for any ambitious portrait artist. Though born in Rhode Island and reared in New­port, Stuart had escaped to the cosmopolitan charms of London during the war and spent eighteen years producing portraits of British and Irish grandees. Overly fond of liquor, prodigal in his spending habits, and with a giant brood of children to support, Stuart had landed in the Marshalsea Prison in Dublin, most likely for debt, just as Washington was being sworn in as first president of the United States in 1789.

For the impulsive, unreliable Stuart, who left a trail of incomplete paintings and irate clients in his wake, George Washington emerged as the savior who would rescue him from insistent creditors. “When I can net a sum sufficient to take me to America, I shall be off to my native soil,” he confided eagerly to a friend. “There I expect to make a fortune by Washington alone. I calculate upon making a plurality of his portraits . . . and if I should be fortunate, I will repay my English and Irish creditors.” In a self-portrait daubed years earlier, Stuart presented himself as a rest­less soul, with tousled reddish-brown hair, keen blue eyes, a strongly marked nose, and a pugnacious chin. This harried, disheveled man was scarcely the sort to appeal to the immaculately formal George Washington.

Once installed in New York, Stuart mapped out a path to Washington with the thoroughness of a military campaign. He stalked Washington’s trusted friend Chief Justice John Jay and rendered a brilliant portrait of him, seated in the full majesty of his judicial robes. Shortly afterward Stuart had in hand the treasured letter of introduction from Jay to President Washington that would unlock the doors of the executive residence in Philadelphia, then the temporary capital.

As a portraitist, the garrulous Stuart had perfected a technique to penetrate his subjects’ defenses. He would disarm them with a steady stream of personal anec­dotes and irreverent wit, hoping that this glib patter would coax them into self-revelation. In the taciturn George Washington, a man of granite self-control and a stranger to spontaneity, Gilbert Stuart met his match. From boyhood, Washington had struggled to master and conceal his deep emotions. When the wife of the Brit­ish ambassador later told him that his face showed pleasure at his forthcoming departure from the presidency, Washington grew indignant: “You are wrong. My countenance never yet betrayed my feelings!” He tried to govern his tongue as much as his face: “With me it has always been a maxim rather to let my designs ap­pear from my works than by my expressions.”

When Washington swept into his first session with Stuart, the artist was awe­struck by the tall, commanding president. Predictably, the more Stuart tried to pry open his secretive personality, the tighter the president clamped it shut. Stuart’s opening gambit backfired. “Now, sir,” Stuart instructed his sitter, “you must let me forget that you are General Washington and that I am Stuart, the painter.” To which Washington retorted drily that Mr. Stuart need not forget “who he is or who Gen­eral Washington is.”

A master at sizing people up, Washington must have cringed at Stuart’s facile bonhomie, not to mention his drinking, snuff taking, and ceaseless chatter. With Washington, trust had to be earned slowly, and he balked at instant familiarity with people. Instead of opening up with Stuart, he retreated behind his stolid mask. The scourge of artists, Washington knew how to turn himself into an impenetrable monument long before an obelisk arose in his honor in the nation’s capital.

As Washington sought to maintain his defenses, Stuart made the brilliant deci­sion to capture the subtle interplay between his outward calm and his intense hidden emotions, a tension that defined the man. He spied the extraordinary force of per­sonality lurking behind an extremely restrained facade. The mouth might be com­pressed, the parchment skin drawn tight over ungainly dentures, but Washington’s eyes still blazed from his craggy face. In the enduring image that Stuart captured and that ended up on the one-dollar bill—a magnificent statement of Washington’s moral stature and sublime, visionary nature—he also recorded something hard and suspicious in the wary eyes with their penetrating gaze and hooded lids.

With the swift insight of artistic genius, Stuart grew convinced that Washington was not the placid and composed figure he presented to the world. In the words of a mutual acquaintance, Stuart had insisted that “there are features in [Washington’s] face totally different from what he ever observed in that of any other human being; the sockets of the eyes, for instance, are larger than he ever met with before, and the upper part of the nose broader. All his features, [Stuart] observed, were indica­tive of the strongest and most ungovernable passions, and had he been born in the forests, it was his opinion that [Washington] would have been the fiercest man among the savage tribes.” The acquaintance confirmed that Washington’s intimates thought him “by nature a man of fierce and irritable disposition, but that, like Socrates, his judgment and great self-command have always made him appear a man of a different cast in the eyes of the world.” 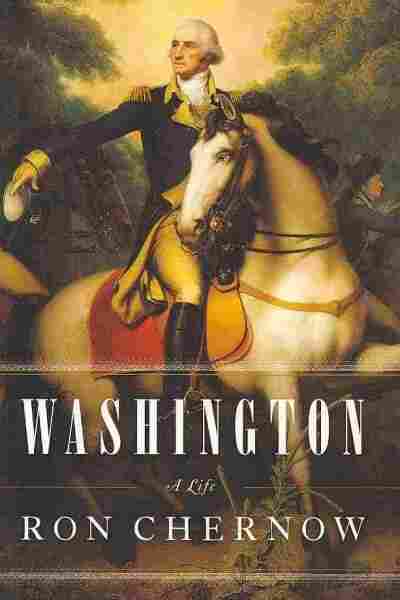