Accessibility links
Movie Review - 'Secretariat' - It's About A Horse, So Of Course It's A Winner The story of the 1973 Triple Crown winner -- and of his determined owner, Penny Chenery, who rose to success despite the obstacles of the male-dominated racing industry -- stars Diane Lane in a restrained performance that keeps the script's sentimentalism in check. 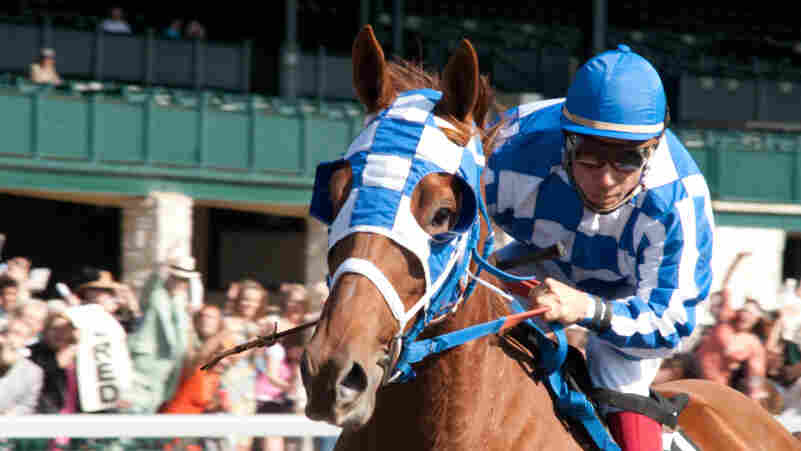 Bold And Beautiful: In Secretariat, the champion racehorse and his jockey, played by Otto Thorwarth, battle it out in the Kentucky Derby, the Preakness and the Belmont to become the first Triple Crown winner in 25 years. John Bramley/Disney Enterprises hide caption

'The Second Fastest Ever'

'Red Is Not Afraid'

Whether it's National Velvet or The Black Stallion or Seabiscuit, movies and horses just seem to go together. The latest entry in that daily double is Secretariat, and if you're in the mood for an equine fairy tale -- or just in the mood for a strong and satisfying performance by Diane Lane -- you're definitely in the right place.

This is the story of the 1973 Triple Crown winner, a horse that appeared on the cover of Time and Newsweek. Lane plays Penny Chenery, Secretariat's owner.

Since the horse himself had few problems on the track, the film has chosen to focus on the difficulties Chenery had off it: She was a woman in a man's world, a woman no one believed in.

Lane is an actress with an instinct for honesty, someone incapable of false moves, and her restrained, focused performance is a stabilizing force. In an unashamedly lyrical movie that occasionally can't resist pushing too hard, having someone who pulls things back toward reality is more than welcome -- it's essential.

As directed by Randall Wallace, Secretariat shows no fear of the sentimental, and that's putting it mildly. This is an old-fashioned, supergenteel family movie. Emotion-run-amok moments are inevitable, but things rarely go too far off the rails.

Helping here is screenwriter Mike Rich, whose work on both the baseball drama The Rookie and Miracle -- the latter about the 1980 U.S. Olympic hockey team -- reveals a touch for sports dramas that must be feelingly told without getting out of hand.

Keeping things exciting are those Triple Crown races that Secretariat dominated in historic style. When those pounding hoofbeats come flying down the track, it's hard not to be happy that you are there to watch them fly.