Accessibility links
The True Story Of 'Antony And Cleopatra' Antony and Cleopatra are among history's most famous lovers. The story of their affair, their war, their defeat and, finally, their suicides has been told and retold for centuries. Now, Adrian Goldsworthy, author of Antony and Cleopatra, uncovers the couple's true story. 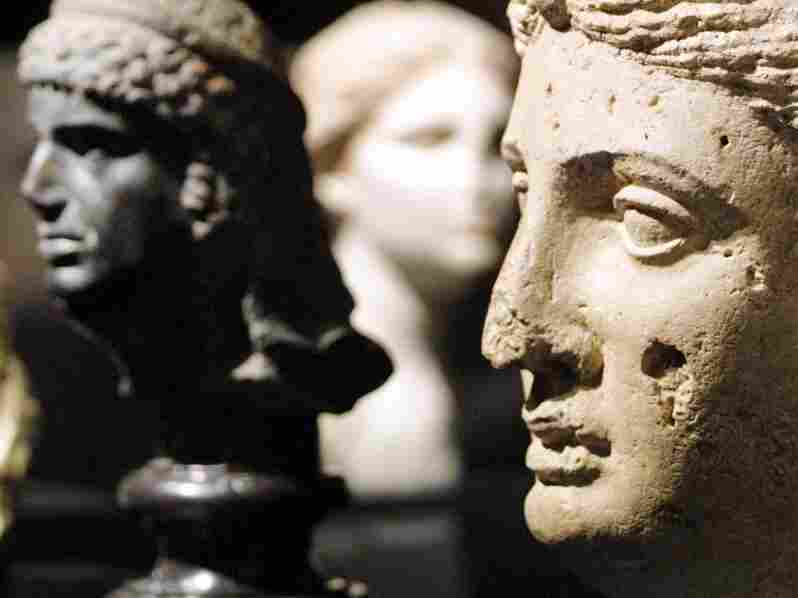 Busts of Cleopatra VII, the last of the Ptolemaic monarchs, on exhibit at The British Museum in London. Adrian Dennis/AFP hide caption

They are arguably the most famous lovers in history. Marcus Antonius of Rome stood at the pinnacle of power, fighting to be the most powerful man in the known world; and Cleopatra VII Philopator was the queen of one ancient civilization, Egypt, and heir to the unmatched cultural achievements of another, Greece.

Their love affair, their war together, their defeat and, finally, their suicides have been told and retold for centuries. But most of those retellings have been far from accurate, according to author and historian Adrian Goldsworthy.

Goldsworthy, author of Antony and Cleopatra, describes the couple's true story and why so much of what we know about them is wrong. 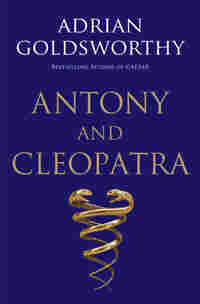 Antony and Cleopatra are famous. With just a handful of others, including Caesar, Alexander the Great, Nero, Plato and Aristotle, they remain household names more than two thousand years after their spectacular suicides. Cleopatra is the only woman in the list, which in itself is interesting and a testament to her enduring fascination. Yet most often Antony and Cleopatra are remembered as a couple, and as lovers -- perhaps the most famous lovers from history. Shakespeare's play helped them to grow into fictional characters as well, and so their story can now be numbered alongside other tales of passionate, but doomed romance, as tragic as the finale of Romeo and Juliet. It is unsurprising that the tale has been reinvented time after time in print, on stage and, more recently, on screen. Since they both had strongly theatrical streaks, this enduring fame would no doubt have pleased them, although since neither was inclined to modesty it would probably not have surprised them or seemed less than their due.

The story is intensely dramatic, and I cannot remember a time when I had not heard of Antony and Cleopatra. As young boys, my brother and I discovered a small box containing coins collected by our grandfather, a man who had died long before either of us was born. A friend spotted one of them as Roman, and it proved to be a silver denarius, minted by Mark Antony to pay his soldiers in 31 B.C. for a campaign partly funded by Cleopatra -- the same coin shown in the photograph section in this book. Already interested in the ancient world, the discovery added to my enthusiasm for all things Roman. It seemed a connection not only with a grandparent, but also with Marcus Antonius the Triumvir, whose name circles the face of the coin with its picture of a warship. We do not know where our grandfather acquired this and the other coins -- an eclectic mixture, several of which are from the Middle East. He may have picked them up in Egypt, where he served with the Royal Field Artillery during the First World War. It is certainly nice to think that.

So in some ways, Antony and Cleopatra have always had a special place in my interest in the ancient past, and yet the desire to write about them is fairly recent. A lot has been written, most especially about the queen, and it seemed unlikely that there could be much more worth saying. Then, a few years ago, I fulfilled a long-held ambition by working on Caesar: The Life of a Colossus, which amongst other things involved looking in far more detail at his affair with Cleopatra, as well as Antony's political association with him.

Some of what I found surprised me, and -- though this was less unexpected -- there were vast differences to the popular impression of the story. If it was valuable to look at Caesar's career with a straightforward chronology, and to emphasise the human element in his own behaviour and that of his associates and opponents, it soon became clear that most other aspects of the period would benefit from the same approach.

For all their fame, Antony and Cleopatra receive little attention in formal study of the first century b.c.. Engaged in a power struggle, they were beaten and so had little real impact on later events. Academic history has long since developed a deep aversion to focusing on individuals, no matter how charismatic their personalities, instead searching for ‘more profound' underlying trends and explanations of events. As a student I took courses on the Fall of the Roman Republic and the creation of the Principate, and later on as a lecturer I would devise and teach similar courses myself. Teaching and studying time is always limited, and as a result it was natural to focus on Caesar and his dictatorship, before skipping ahead to look at Octavian/Augustus and the creation of the imperial system. The years from 44–31 b.c, when Antony's power was at its greatest, rarely receive anything like such detailed treatment. Ptolemaic Egypt is usually a more specialised field, but, even when it is included in a course, the reign of its last queen -- poorly documented and anyway in the last days of long decline -- is seldom treated in any detail. The fame of Cleopatra may attract students to the subject, but courses are, quite reasonably and largely unconsciously, structured to stress more ‘serious' topics, and shy away from personalities.

Antony and Cleopatra did not change the world in any profound way, unlike Caesar and to an even greater extent Augustus. One ancient writer claimed that Caesar's campaigns caused the death of one million people and the enslavement of as many more. Whatever the provocation, he led his army to seize Rome by force, winning supreme power through civil war, and supplanted the Republic's democratically elected leaders. Against this, Caesar was famous for his clemency. Throughout his career he championed social reform and aid to the poor in Rome, as well as trying to protect the rights of people in the provinces. Although he made himself dictator, his rule was generally benevolent, and his measures sensible, dealing with long-neglected problems. The path to power of his adopted son, Augustus, was considerably more vicious, replacing clemency with revenge. Augustus' power was won in civil war and maintained by force, and yet he also ruled well. The Senate's political freedom was virtually extinguished and popular elections rendered unimportant. At the same time he gave Rome a peace it had not known in almost a century of political violence and created a system of government that benefited a far wider section of society than the old Republic.

Antony and Cleopatra proved themselves just as capable of savagery and ruthlessness, but the losers in a civil war do not get the chance to shape the future directly. Apart from that, there is no real trace of any long-held beliefs or causes on Antony's part, no indication that he struggled for prominence for anything other than his own glory and profit. Some like to see Cleopatra as deeply committed to the prosperity and welfare of her subjects, but this is largely wishful thinking. There is no actual evidence to suggest that her concerns went any further than ensuring a steady flow of taxation into her own hands, to cement her hold on power. For only a small part of her reign was she secure on the throne, at the head of a kingdom utterly dependent on

Roman goodwill, and it would probably be unreasonable to expect her to have done more than this.

Julius Caesar was highly successful. He was also highly talented across a remarkable range of activities. Even those who dislike the man and what he did can readily admire his gifts. Augustus is an even harder figure to like, especially as a youth, and yet no one would fail to acknowledge his truly remarkable political skill. Caesar and his adopted son were both very clever, even if their characters were different. Mark Antony had none of their subtlety, and little trace of profound intelligence. He tends to be liked in direct proportion to how much someone dislikes Octavian/Augustus, but there is little about him to admire. Instead, fictional portrayals have reinforced the propaganda of the 30s b.c., contrasting Antony, the bluff, passionate and simple soldier, with Octavian, seen as a cold-blooded, cowardly and scheming political operator. Neither portrait is true, but they continue to shape even scholarly accounts of these years.

Cleopatra was clever and well-educated, but unlike Caesar and Augustus the nature of her intelligence remains elusive, and it is very hard to see how her mind worked or fairly assess her intellect. It is the nature of biography that the author comes to develop a strong, and largely emotional, attitude towards his or her subject after spending several years studying them. Almost every modern author to come to the subject wants to admire, and often to like, Cleopatra. Some of this is a healthy reaction to the rabid hostility of Augustan sources. Much has to do with her sex, for as we noted at the start, it is a rare thing to be able to study in detail any woman from the Greco-Roman world. Novelty alone encourages sympathy -- often reinforced by the same distaste for Augustus that fuels affection for Antony. In itself sympathy need not matter, as long as it does not encourage a distortion of the evidence to idealise the queen. There is much we simply do not know about both Antony and Cleopatra -- and indeed most other figures from this period. The gaps should not be filled by confident assertions drawn from the author's own mental picture of Cleopatra as she ought to have been. 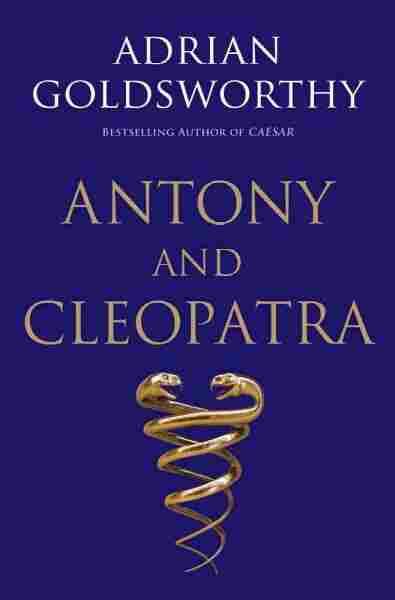