Accessibility links
U.S. Airstrikes Target Afghan Insurgents' Safe Havens As the U.S. military cracks down on insurgent groups in Afghanistan, survivors are fleeing to safe havens across the border in Pakistan, where they regroup. U.S. officials say winning the war will include ramping up drone strikes to destroy those sanctuaries. 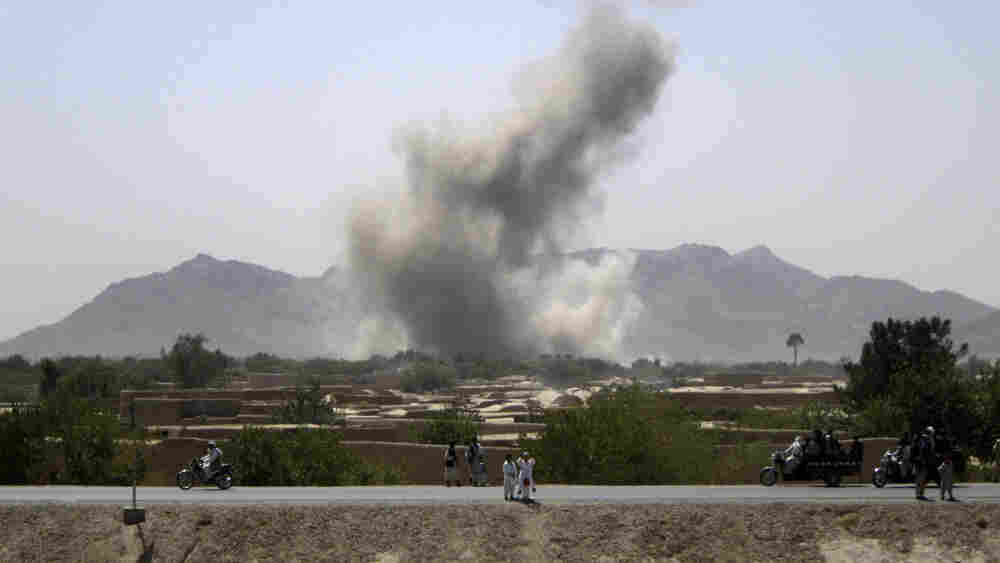 Smoke rises after NATO aircraft conduct an airstrike near the Arghandab River, south of Senjeray village, in Afghanistan's Kandahar province, where U.S. commanders had identified as insurgent positions, Sept. 11, 2010. As the U.S. cracks down on insurgents in Afghanistan, survivors flee to safe havens across the border in Pakistan. Now, the U.S. is ramping up strikes on Pakistan's lawless border region. Todd Pittman/AP hide caption

U.S. government officials often describe the war in Afghanistan as a big game of Whack-a-Mole.

The U.S. military cracks down on insurgent groups in Afghanistan -- perhaps killing some key members -- but the survivors flee to safe havens across the border in Pakistan. They regroup and pop up again.

U.S. officials say winning the war in Afghanistan means dealing with those safe havens in Pakistan -- and that means ramping up drone strikes.

Ahmed Rashid, a Pakistani journalist who has written extensively about the Taliban, says 2010 has been "extraordinary."

"We've had more than 70 drone attacks this year, which is already more than the whole of 2009," Rashid says.

U.S. drone attacks in the lawless tribal areas of Pakistan have increased to record levels in the past month. At least 20 such attacks took place in September alone.

There are several reasons for the uptick. First, there are reports of CIA efforts to disrupt a potential terrorist plot against targets in Europe. Second, there has been an ongoing CIA campaign since 2008 designed to take out key al-Qaida leaders. Finally, there are now signs that the U.S. military in Afghanistan is working with the CIA to make the safe havens less safe for the Taliban.

A senior adviser to Gen. David Petraeus, the top commander in Afghanistan, tells NPR that Petraeus himself requested two recent drone strikes, targeting members of the Haqqani network, a strong element of the insurgency.

Displacement has probably made it more difficult to track down exactly where [Afghan insurgents] are now, because once they leave the tribal areas, there will be much less intelligence if these leaders are hiding in any of the Pakistani towns or cities outside that belt.

Anthony Cordesman of the Center for Strategic and International Studies says the military and the CIA are working together.

"What you see is an exchange of data, an exchange of targeting, requests that move back and forth," Cordesman says. "This is done with a kind of integrated intelligence effort which is tied to priorities. Some of these priorities come from the highest command levels."

Those command levels reach all the way to Petraeus. U.S. officials say this kind of cooperation between the military and the CIA should be expected in a counterinsurgency campaign that involves operations in two countries -- Afghanistan and Pakistan. And the pressure is on both sides of the border.

One senior U.S. defense officials says on any given night in Afghanistan, U.S. special operations forces conduct up to 20 raids. Those operations push insurgents across the border. And the U.S. follows them, either with CIA drone strikes or cross-border attacks. Just this week, U.S. helicopters launched an attack into Pakistan that killed roughly 30 people.

"The Haqqani network and the Pakistani Taliban have been executing many local Pashtuns who they call spies for the Americans," Rashid says.

Second, he says, the drone strikes have some insurgent leaders on the run. And that poses yet another challenge.

"Displacement has probably made it more difficult to track down exactly where they are now, because once they leave the tribal areas, there will be much less intelligence if these leaders are hiding in any of the Pakistani towns or cities outside that belt," Rashid says.

A senior U.S. defense official put it this way: "In a counterinsurgency, the insurgents can't win without a sanctuary."

And he says the reverse is also true: "If you're fighting a group that has a sanctuary, it's very hard to win."