Accessibility links
Maglite: Shining The Light On Made In The U.S.A. Mag Instrument has been making its flashlights in the U.S. for years. Anthony Maglica is the driving force behind a company that sells its signature product -- the Maglite -- for the same wholesale price it did in 1979. He vows to keep production at home, even if it means losing money. 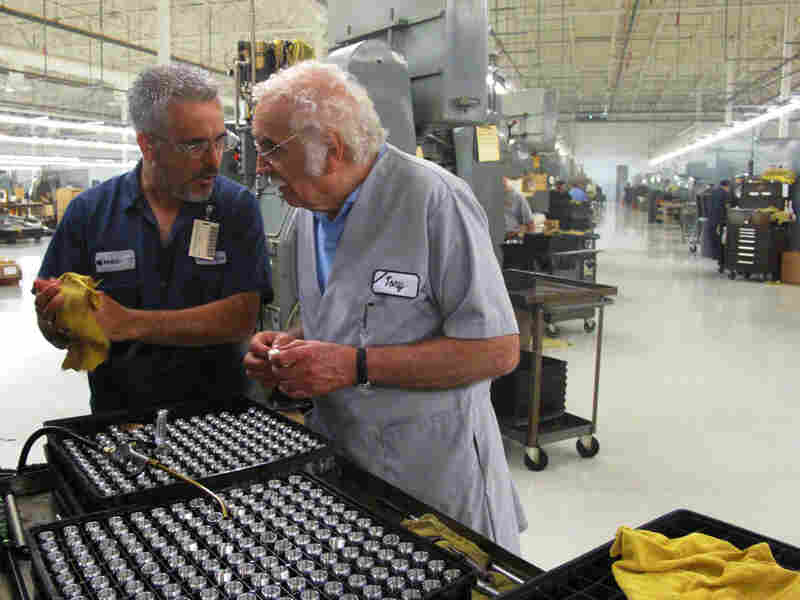 Anthony Maglica (right), the founder of Mag Instrument, visits the factory floor in Ontario, Calif., nearly every morning. He is dedicated to manufacturing the company's flashlights in the U.S. Tamara Keith/NPR hide caption 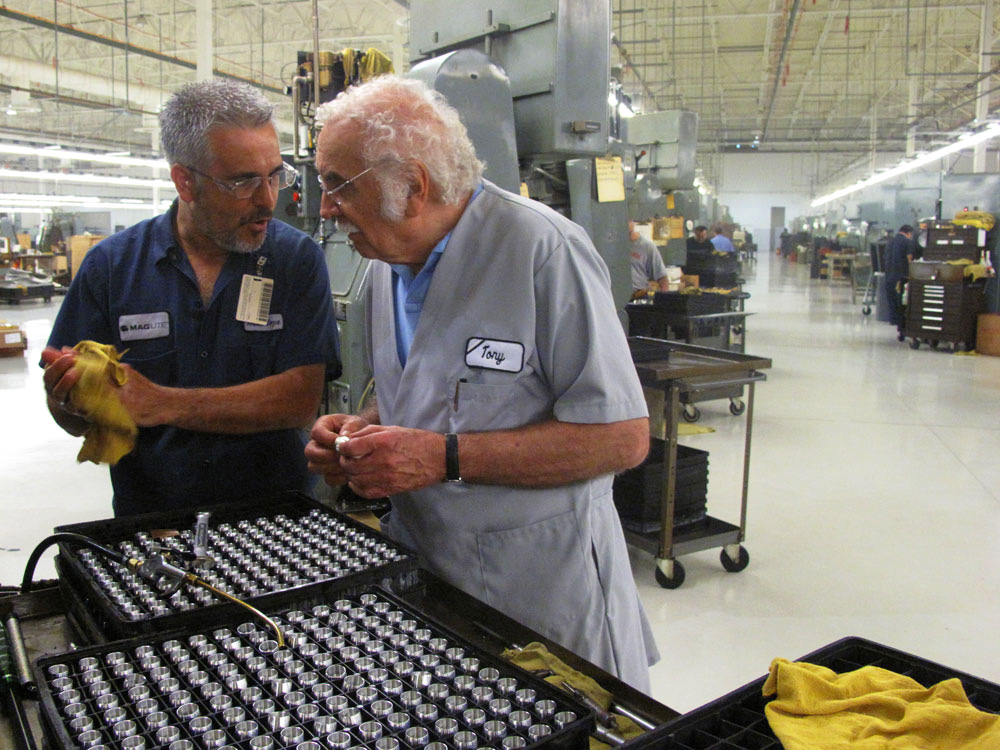 Anthony Maglica (right), the founder of Mag Instrument, visits the factory floor in Ontario, Calif., nearly every morning. He is dedicated to manufacturing the company's flashlights in the U.S.

It's easy to say that nothing is made in the U.S.A. anymore. So many things we use in our daily lives now come from China or elsewhere. But the National Association of Manufacturers says 286,000 companies make things here, including one that produces the Maglite flashlight.

These are the big, heavy black metal flashlights that police officers use -- and their smaller cousin the Mini Maglite. They're durable, simple and sleek. And they're made in Ontario, Calif., by Mag Instrument Inc.

Lynn Perry, head of customer service for Mag Instrument, says a lot of people are surprised the flashlights are domestically produced.

"They're amazed that we're right here," Perry says. "People think that this product is coming from China. And you tell them, 'No, this is it, we're made in the U.S.A. We're still here.' "

There's a reason people assume Maglites are made overseas. Making a mass-produced consumer good like this in Southern California defies prevailing business logic. The latest government figures show the U.S. trade deficit improved somewhat in July. And President Obama has set a goal of doubling the nation's exports over the next five years.

So, how and why are Maglites still made in the U.S.?

Automation, bringing more and more production in-house, and having good patent attorneys is part of it. But it all comes down to the stubborn determination of one man -- Anthony "Tony" Maglica, the company's founder.

"I will not go out of the country if my life depends on it," Maglica says. "There's no reason for it really."

Maglica is 79 years old and still comes to work every day, often before dawn. He walks the 700,000-square-foot factory floor, checking in on every detail of production.

Maglica was born into the Great Depression in New York. But he spent his formative years living in Croatia surviving hunger and worse as World War II tore through Europe. When he returned to America and set out to start his own company, he says, he had just $125. He has built a multimillion-dollar business, with more than 700 employees and customers all over the world.

Over the years, Maglica has worked hard to bring more production in-house to cut out the middle man and streamline operations. The springs that go into the flashlights used to be made by another company; now they're made at the Mag factory in Ontario. 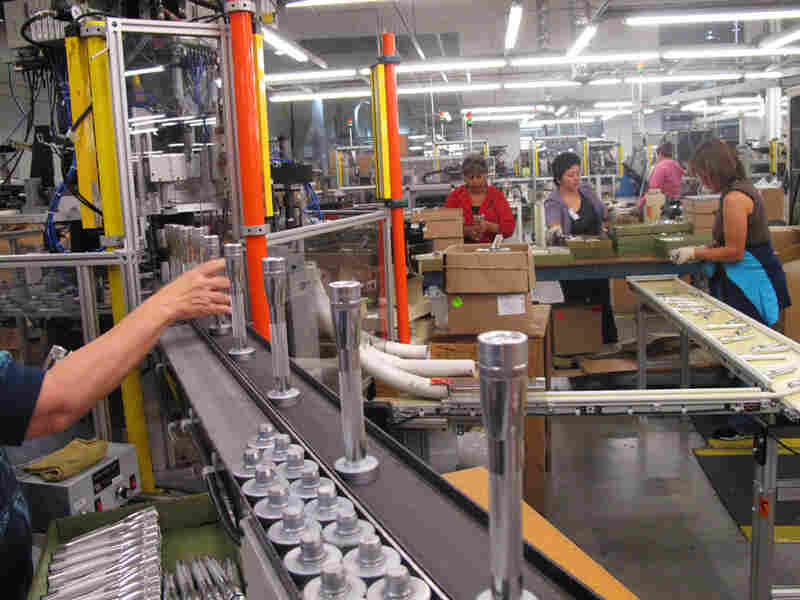 Workers assemble Maglites in the company's U.S. factory. The process is largely automated now and much of the production is done in-house. Tamara Keith/NPR hide caption 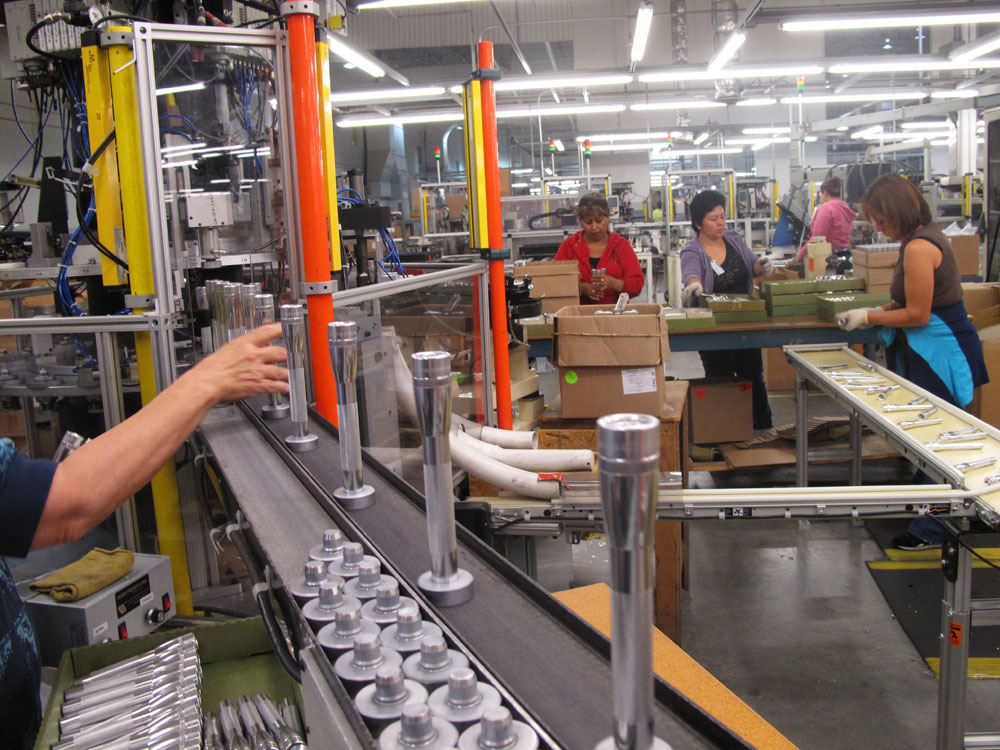 Workers assemble Maglites in the company's U.S. factory. The process is largely automated now and much of the production is done in-house.

But one thing that isn't made in the U.S. is the tiny bulb in the Mini Maglite -- and that clearly drives Maglica crazy.

In the early days all Maglites were assembled by hand. Now much of the work is automated. Engineers at Mag Instrument designed and built all of the sophisticated assembly systems.

"We have to be competitive pricewise. The only way to do that is to automate and that's the key to our success," says Gus Hawthorn, the company's director of engineering.

Mag has never raised the wholesale price on the Maglite. Three decades later they cost exactly what they did in 1979.

"Tony will be the first one to tell you that had this been a publicly owned company, they would have fired him," Hawthorn says. "They would have thought he was nuts.  Maybe he is for continuing to do it in this country when it's so difficult. But there's a lot of us in this company that are very thankful that he did."

Maglica says people tell him all the time he could make more money if he stopped insisting on making Maglites in the U.S. And he knows they're right. He just doesn't care.

What Maglica cares about are his employees, whom he describes as family.  Last year, as a result of the tough economy, Mag Instrument lost nearly $11 million. The company had to lay off 200 people.

Maglica says it was the saddest thing he ever had to do.

"Where are those people going to go?" he says. "There's no jobs. You know I tell you the truth, if everybody will come and tell me 'Tony, you know what, we all quit because we got a wonderful job,' it would be a hell of a relief on me because I won't feel responsible."

Even though he is nearly 80 years old, he refuses to talk about retirement.

Maglica hasn't been on a vacation since the 1990s and is now working even longer days than normal to design a new product line.