Accessibility links
U.S. Voters Abroad Test Efforts To Expedite Balloting Hundreds of thousands of ballots from military and other overseas voters were never returned or counted in the 2008 U.S. election. But a new law requires states to send absentee ballots overseas at least 45 days in advance, and some states are now accepting votes via e-mail and fax. 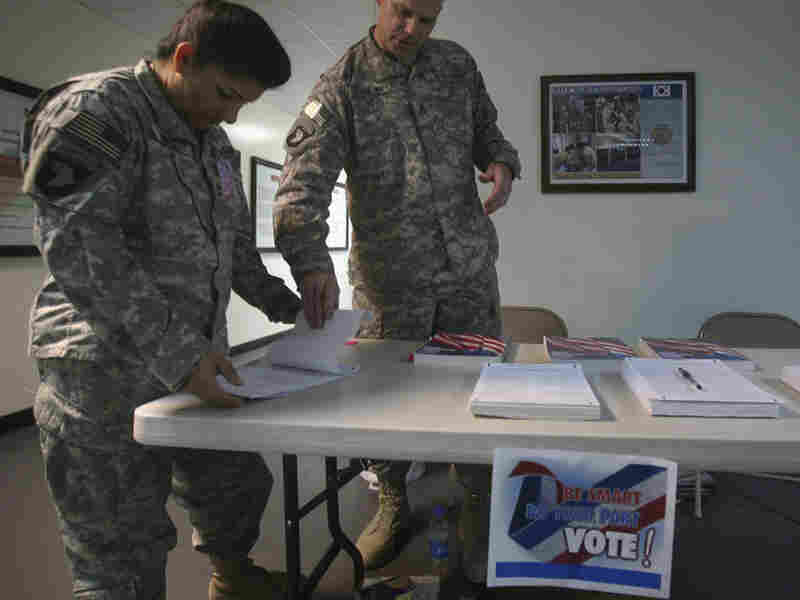 A U.S. member of Combined Joint Task Force 101 (left) checks a voting ballot before filling it out at a U.S. military base in Afghanistan. A new law requires states to send absentee ballots overseas at least 45 days in advance, and some states are now accepting votes via e-mail and fax. Rafiq Maqbool/AP hide caption 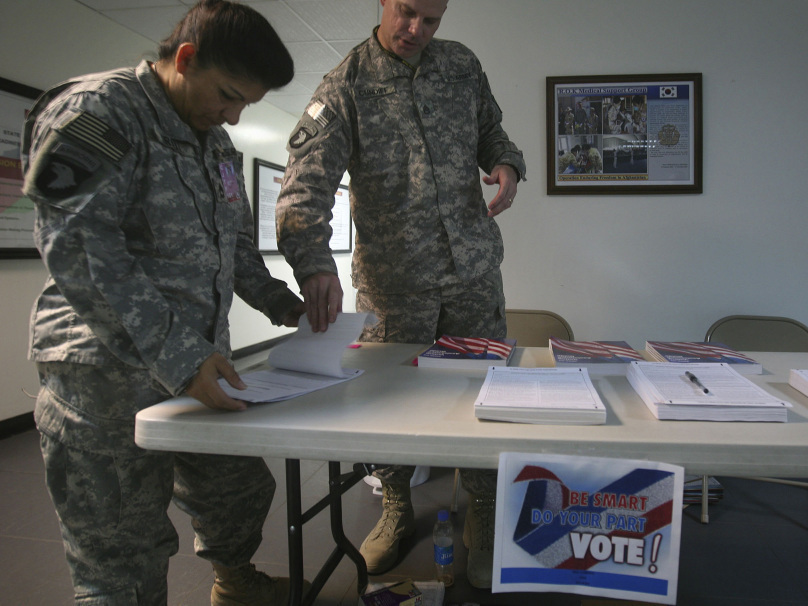 A U.S. member of Combined Joint Task Force 101 (left) checks a voting ballot before filling it out at a U.S. military base in Afghanistan. A new law requires states to send absentee ballots overseas at least 45 days in advance, and some states are now accepting votes via e-mail and fax.

It's not easy to vote if you're an American living overseas or serving in the military.

Hundreds of thousands of ballots requested by military and overseas voters in the 2008 elections were never returned or counted.  Many of those voters simply did not get their ballots in time.

But a new law this year appears to be turning things around.

Take the case of retired Texan Lanny Marcus, who has lived in Cali, Colombia, for the past 15 years, but still feels strongly about voting back home. Every election, Marcus keeps his fingers crossed when he requests an absentee ballot.

Will he get the ballot on time? Too often, as in his state's primary this past March -- the answer is no.

"I never got it," Marcus says. "Usually they come a few days before or after the election, but that one never came."

So imagine his surprise when he got a message the other day from his county election office in Texas.

"When I went to my e-mail, I couldn't believe it," he says. "The first time in my life -- absentee ballot by e-mail."

And he got it a month and a half before the November election, allowing plenty of time to fill it out and send it back by mail.

When I went to my e-mail, I couldn't believe it. The first time in my life, absentee ballot by e-mail.

Hundreds of thousands of Americans in the military or living abroad are getting similar surprises. Congress last year passed the Military and Overseas Voter Empowerment Act, which requires states to send these voters their ballots at least 45 days before the election.

"There's also a process that allows them to track ... their request to receive the ballot electronically, and ... to track the process of the ballot being returned and received by the county election official in their home county," says Randall Dillard, a spokesperson for the Texas secretary of state's office.

That means voters like Lanny Marcus will not have to guess whether their vote has been counted.

It's a huge change for millions of Americans living abroad or serving in the military, who for years were often precluded from voting by excessive mail delays and confusing rules. By comparison, in one Texas county this year, election officials got completed ballots back from American soldiers in Korea only four days after the county sent the ballots out.

Susan Dzieduszycka-Suinat runs the Overseas Vote Foundation, a group dedicated to easing the process. "Really, the entire landscape of U.S. overseas and military voting has transformed," she says.

Dzieduszycka-Suinat lives in Germany and got her ballot from California in early September. She says she has already sent it back, taking advantage of a special service available to many U.S. overseas voters.

Resources For American Voters Living Overseas Or Serving In The Military

"This program allowed me to go online, pay $25 U.S. to get a FedEx guy to my door in 45 minutes who took my ballot, and it arrived in California the next day," she says. "So that was a pretty amazing experience, I have to admit."

But the process has had some hiccups. Several states, especially those with late primaries, have struggled to meet the 45-day deadline. Four states received waivers from the Defense Department, which oversees the program.

But that's not sitting too well with at least one military voter advocacy group, which has filed suit against the state. Still, Carey says it appears that most states got the ballots out on time. And he notes that while many overseas voters have to send back an actual paper ballot, some states are allowing them to be returned by fax or e-mail.

"We're really hoping that this reliance and this leveraging of the technology that's available will really help us speed up this process and increase the number of voters that are successful in casting their absentee ballot," he says.

A few jurisdictions, like some counties in West Virginia, are even experimenting with online voting. That has some voter groups concerned, though, about ballot security. The Overseas Vote Foundation is recommending that anyone who sends their votes electronically also send a backup paper copy, just to be safe.