Accessibility links
Burgeoning Brazil Seeks Profits Beyond Its Borders The South American giant wants to be a world player, and its economy is growing fast -- and so is its stake abroad, in places as different from each other as Texas, Angola and all over Latin America. 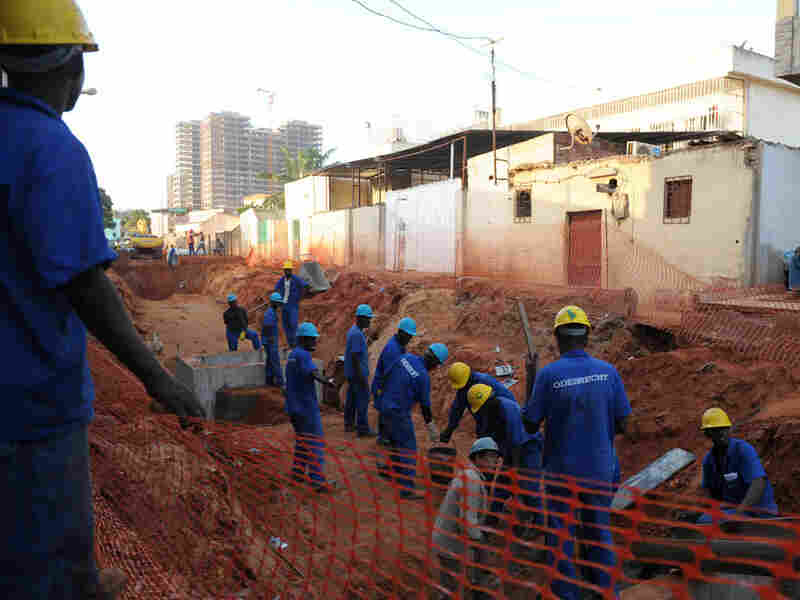 Laborers for Brazilian construction company Odebrecht work on a construction site in Luanda, Angola, in January 2010. Odebrecht is among the major Brazilian companies that are expanding the South American country's economic influence around the world. Issouf Sanogo/AFP/Getty Images hide caption 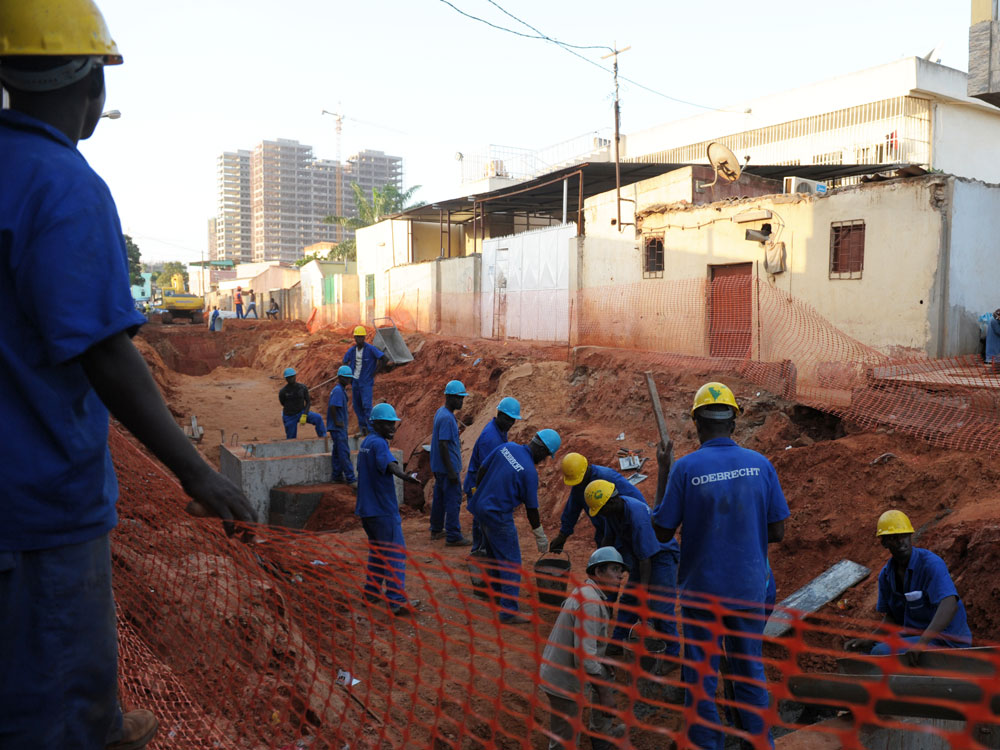 A big story of the past decade has been China's fast-growing investments abroad, as it seeks oil in Africa, iron ore in Latin America and all manner of companies in the United States.

But there is another up-and-coming country making big investments in the face of the global downturn: Brazil. The South American giant's economy is growing fast -- and so is its stake abroad, in places as different from each other as Angola, Texas and all over Latin America.

One Brazilian company has found an out-of-the way place to do business. The location is Chaco province, in Argentina's far north, near Paraguay. It is scrub grass as far as the eye can see, and in summer the temperature can hit 120 degrees.

People in Chaco province say jobs are scarce and about half the workforce looks for employment with the government.

But Santana Textiles of Fortaleza, Brazil, saw opportunity in Chaco.

In its factory, giant machines spin thread from cotton grown in the province. The thread is then dyed, cleaned, woven into fabric, and sold to Argentina's top jean makers.

In the two years since it opened, this family-owned factory, with 350 workers, has cornered nearly one-quarter of the Argentine market in denim fabrics.

It's a very ambitious country with vision, and I think that the increase in private investment that we're seeing outside of Brazil is part of this trend.

Santana Textiles is now about to open another factory abroad, in a place that's similar to Chaco: dry, hot, sparsely populated south Texas.

That factory will be even bigger, with 800 employees.

"We look for the leadership of Western countries. We know to achieve this goal we have to go to the United States of America, because it's the biggest market," says Igor Perdigao, Santana Textiles' director in Argentina.

In many ways, Santana Textiles is much like other big Brazilian companies investing abroad. Efficient, modern and well capitalized, it can tap the international credit market as well as Brazil's big development bank.

The big Brazilian players that are expanding abroad include giants such as the mining company Vale and the biggest company in South America, Petrobras, which is drilling for oil worldwide.

Embraer, Brazil's airplane manufacturer, is planning to build a plant in Florida. And Odebrecht, a construction company, has built bridges and highways in Latin America and Africa.

"It's a very ambitious country with vision, and I think that the increase in private investment that we're seeing outside of Brazil is part of this trend," McCormick says.

In the early part of the last decade, Brazil's foreign investments averaged $700 million per year. By 2008, they topped $20 billion, a figure that may be eclipsed this year.

Brazil's biggest stake is in neighboring Argentina. Now, nearly one-third of all foreign investment to Argentina comes from Brazil, according to ABECEB, a consulting firm in Buenos Aires that frequently works for Brazilian investors.

Brazil has surpassed the U.S., traditionally the region's biggest investor.

Argentines see it in oil and mining, but also in construction, cement and the all-important beef and agricultural sectors.

Bernardo Kosacoff is a former U.N. economist and expert on Brazil's economy who now heads a think tank in Buenos Aires.

Kosacoff says Brazil wants to be a world player -- and for a country with the world's eighth-largest economy, that means having more than just a big domestic market.

It means creating international networks, he says, where Brazilian products can be bought and sold.

In a way, Santana, the textile maker in Chaco, mirrors Brazil itself.

For 47 years, the company was content at home. Santana Textiles started by making hammocks, then moved to threads, and then finally fabrics. It expanded across Brazil, operating four factories.

Perdigao, who is overseeing the Argentine operations, says the company's board finally decided it was time to expand abroad.

Only 28, well-educated and fluent in three languages, Perdigao bubbles with enthusiasm as he talks about the future.

"We have five countries that are pretty close from where we are now, and we thought that this factory would be a nice way to reach those markets," he says.

The plan, he says, is to expand output in Argentina and begin to supply jean makers to the northeast, in Paraguay, and to the west in Bolivia and Chile.