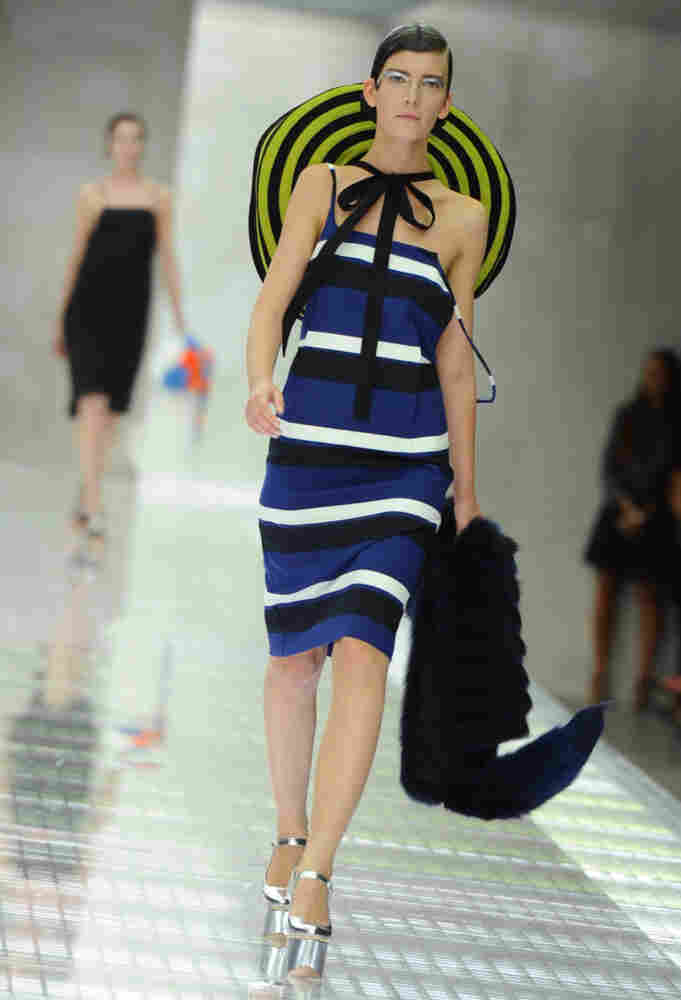 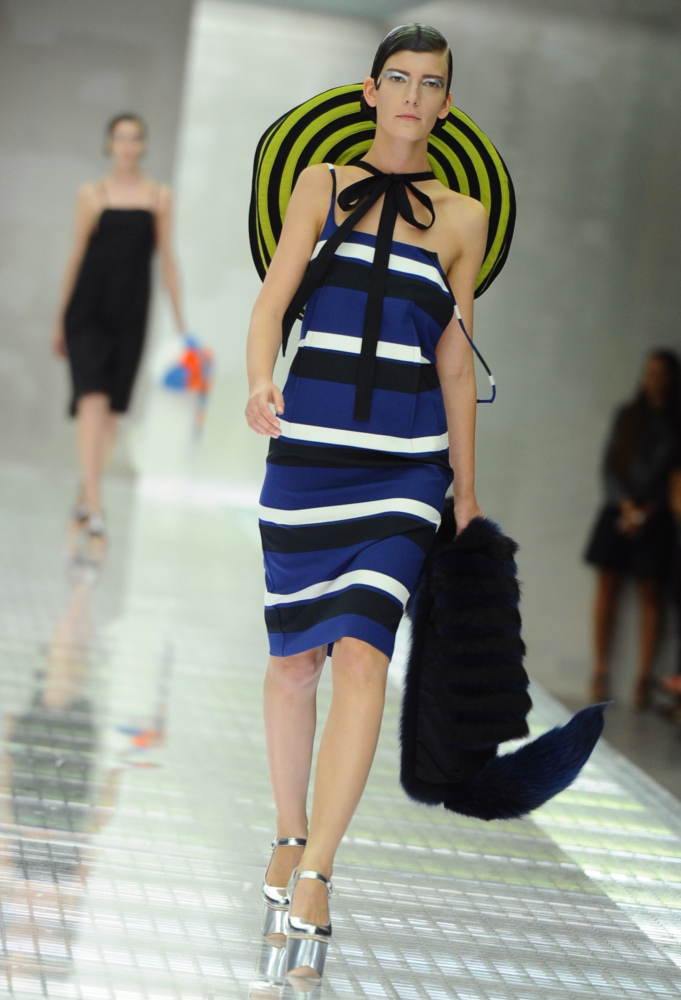 Bright, preppy colors and rugby stripes are in this spring, says fashion expert Sally Singer. Above, a model shows a piece from the Prada Spring-Summer 2011 collection during fashion week in Milan, Italy.

Milan, London and New York have had their fashion weeks, and now it's Paris' turn.  The world's fashion designers, editors and buyers have descended on the city to see the latest styles -- which will trickle down to the rest of us before you know it.

Designer looks "reach the consumers more quickly than ever -- in all sorts of different ways," says Sally Singer, editor in chief of T: The New York Times Style Magazine.

For Spring 2011, Singer tells NPR's Ari Shaprio that she's seen a "profusion of stripes -- a return to kind of preppy flag colors -- colors you'd associate with BMWs," she describes.

Look out for bright orange, royal blue and "taxi cab" yellow -- set against white and cream. "You have this very sporty, very accessible, upbeat sense of pattern," Singer observes.

Singer -- who spent many years at Vogue magazine -- has seen countless new designs this season, and yet she says it's still possible to pick out the common themes.

"You can see 12 shows a day," she says, but "at the end of the day, for some reason, certain trends just bubble up, and they're unmissable."

Singer rattles off a few:

"Proportions are changing, and they're getting far more 70s-y," Singer says. Designers are "reacting to a uniform culture.  People are seeing the same movies, they're reading the same books, they're going to the same museum shows."

She cites Tilda Swinton's outfits in the 2009 film I Am Love as particularly influential this season.

An educated fashion consumer will buy the right things for the right reasons. They'll stop buying things just to have them.

The economy is looking stronger now than it was during last year's Paris fashion week, and retailers say customers are shopping again -- but shopping in a different way.

"She's shopping in a curatorial way," Singer reports. "She's shopping by the piece, not by the look." Customers aren't buying a whole wardrobe at the start of the season -- now they just buy a coat, or shoes, or a bag -- and that's not necessarily a bad thing.

"The good thing that's come out of all of this is that an educated fashion consumer will buy the right things for the right reasons," Singer explains. "They'll stop buying things just to have them."

In a tight economy, shoppers are less inclined to purchase items "for a life that would never be lived" -- those garments often languish at the back of closets.