Accessibility links
White House Eyes Youth Vote Ahead Of Midterms College students and young voters played a big role in President Obama's election two years ago. Polls show they still support him and the Democrats, though not by the record margin they did in 2008. 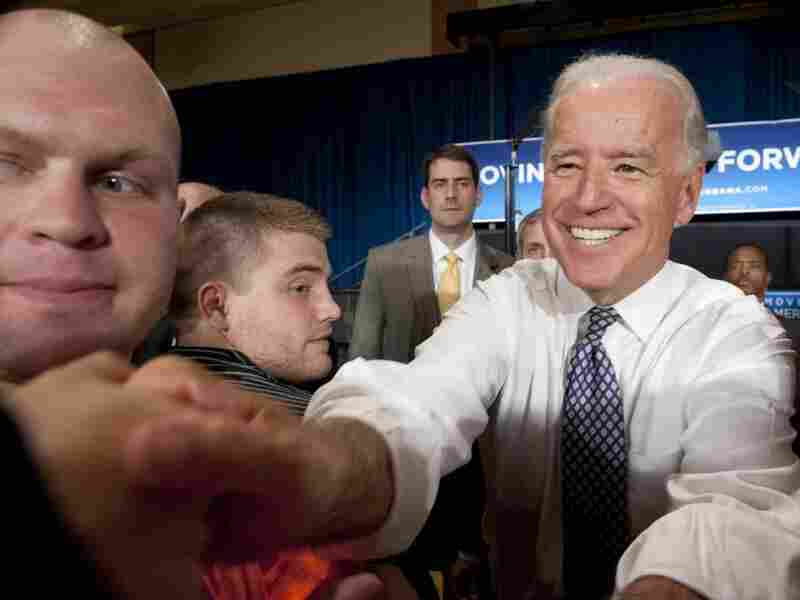 Vice President Joe Biden greets the crowd after a rally at Pennsylvania State University in State College, Pa., on Tuesday. He told students that it's critical that they vote this year. John Beale/AP hide caption

The White House is trying this week to re-energize college students and young voters who played a big role in President Obama's election two years ago. Polls show they still support him and the Democrats, though not by the record margin they did in 2008.

Obama held a huge rally at the University of Wisconsin-Madison. Other administration officials -- including Vice President Joe Biden, who went to Penn State -- have fanned out across the country as well.

Young people -- voters younger than 30 -- went for Obama in 2008 by a 2-1 margin. They were excited, they were involved, and they used the Internet to drive election organizing like never before.

In the heart of campus at Penn State, Biden told a packed ballroom of mostly students that it's critical that they not let up this year.

Outside, volunteers waved clipboards looking for students who haven't registered to vote.

Beyond getting a signature on a form, the trick is to motivate college students and other young voters who traditionally have lower turnout rates than the population as a whole.

Voters 18 to 29 years old have a more positive outlook on government than their older counterparts, according to a recent poll from the Society for Human Resource Management and National Journal, conducted with the Pew Research Center.

Penn State freshman Connor Mariani said he is still a big supporter of the president. He said he's voting for sure this year, but he added that he does find himself having to defend Obama.

Mariani said he is definitely voting this year, but more typical is Chardae Harris, a sophomore, who said she's not following the election closely.

"School is taking up all my time," she said.

Two years ago, Harris was an active Obama campaign volunteer.

"I haven't even really been watching TV. And, to a certain extent, especially for, like, a college student, that's really where you get most of your information with school and stuff like that," she said. "So if I don't have time to watch TV, I don't really have time to catch up on it."

With so many potentially close races this year, Democrats are concerned that such ambivalence will take a toll in November.

Scott Keeter, director of survey research at the Pew Research Center for the People and the Press, says voters younger than 30 are still the single best age group for Obama. But instead of the 34-point margin these voters gave the president over John McCain in 2008, latest polling shows that in this year's U.S. House races, young voters give Democrats just a 4-point edge over Republicans. Keeter says economic worries are a big part of it.

"The economy, in particular, arguably may be hurting young people more than it is other age groups: last hired, first fired; or maybe they never got hired in the first place. They may have to move back in with their parents," he says. "And so it's not surprising that some of their confidence in the Democratic Party and in Obama himself would be shaken."

Although polls still show that young people have a positive view of government, and though they are far more liberal on social issues than the GOP, Republicans see an opportunity.

About 50 members of the Penn State College Republicans gathered on Tuesday night, a few hours after Biden's rally, at a campus building known as the HUB. There was no apathy there.

"Just the fact that college students were outside the HUB at 8 a.m., not only at 8 a.m. but in the pouring rain at 8 a.m., really shows how passionate we are about taking back our seats in November," sophomore Maggie Quinn told the group.

Ethan Wolfinger, who was among those present, smiled as he thought about what a difference two years make.

"I could probably name about five McCain supporters, and as far as the people that were political, there was probably at least 100 people that liked Obama," he said. "So it was definitely a big shift."

But Quinn also told the group that the election is still more than a month away -- and they have to keep at it. In the meantime, they will enjoy the fact that this election, it's somebody else's turn to play the underdog.