Dr. Alden Parsons, a thoracic surgeon, had just finished 15 years of medical training. But instead of entering the world of private practice, she went to work for the Rex Healthcare hospital system in February. 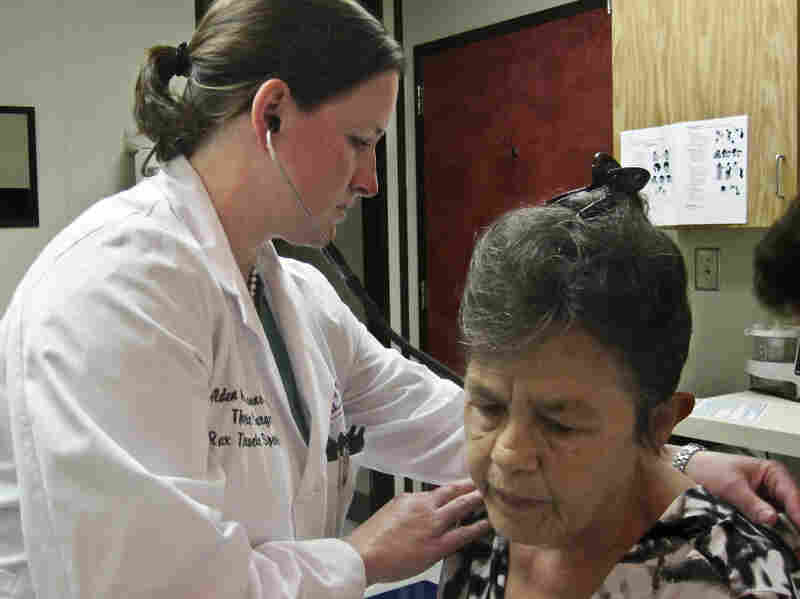 Dr. Alden Parsons, a thoracic surgeon, listens to Julia Neal's breathing at her office in Raleigh, N.C. After she completed her 15 years of medical training, Parsons decided to skip private practice and instead accepted a position at Rex Healthcare, a local hospital system. Jenny Gold hide caption

While some of her medical school classmates continued their training or joined university faculties, the rest went to work for groups affiliated with hospitals.

"I don't know anyone who went out into their own practice," says Parsons, 38. "Trying to be a mother and a wife and a thoracic surgeon, I needed a job that would help me streamline things."

Last year, half of new doctors were hired by hospitals, according to the Medical Group Management Association, a professional organization for physician practices. According to a 2009 report by the American Medical Association, 1 in 6 doctors works for a hospital, and the number is quickly growing.

Several factors are driving the trend. For some doctors, the recession is making it more difficult to run a small business, with fewer patients coming in for care and others unable to pay their bills. And many physicians like Parsons, who are just starting out, don't want the long hours and administrative headaches that come with private practice.

For Rex Healthcare and many other hospitals, hiring doctors is crucial. Having more doctors in the fold guarantees a steady stream of patient referrals, and, hospital executives say, it bolsters care through better coordination of services. They also emphasize the impact of the new health overhaul law: It rewards creation of more efficient, integrated models of care.

Also In This Series

Some experts worry, however, that hiring doctors and forming the "accountable care organizations" envisioned under the law could give hospitals much more negotiating clout with health insurers -- and drive up insurance prices paid by employers and consumers.

Steve Burriss, senior vice president in charge of physician employment at Rex, part of the University of North Carolina's health care system, has hired about 30 physicians over the past few years and is in talks with another 55. He has to act quickly because Raleigh is a highly competitive market and each of the major systems -- among them Duke Medicine, WakeMed Health & Hospitals and Novant Health -- wants to grow and attract patients with private insurance, which typically pays more than the Medicare and Medicaid programs for the elderly, poor and disabled.

For a hospital, Burriss says, anything that disrupts the stream of patient referrals, including losing the loyalty of local physicians, "can have a really big impact on your ability to make money. Just a 3 percent change in any of that can really wipe out your whole bottom line."

Burriss estimates there are only about 67 doctor practices left in the Raleigh area that are not yet affiliated with a hospital. In the next five years, he says, the vast majority will be scooped up by local hospital systems. The doctors have some leverage: "If we don't accommodate the needs they have," he says, "they're going to look to someone else."

Hospitals 'Good Deal' For Some Doctors 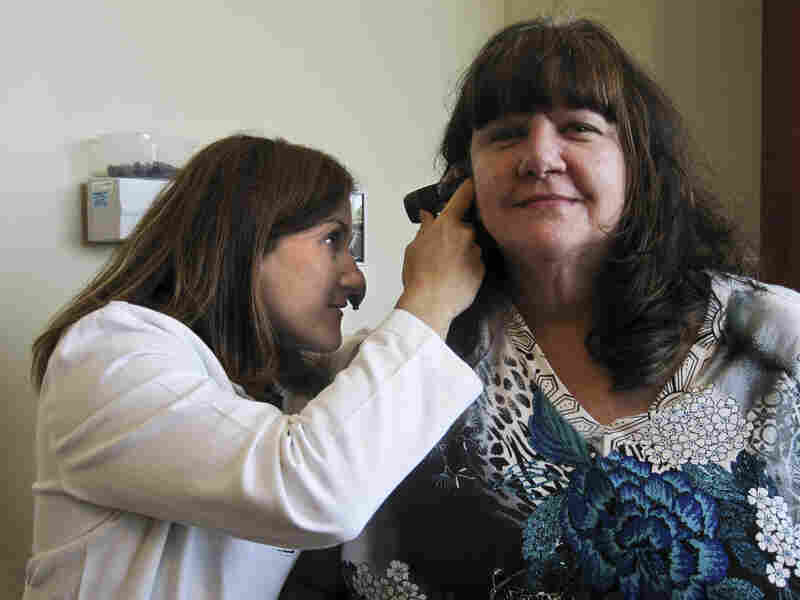 Dr. Michele Roberts Casey examines Janice Seitzinger at her office on the campus of WakeMed Health & Hospitals in Raleigh, N.C. Casey, a primary care physician, made the leap from private practice to hospital employment in April. Jenny Gold hide caption

Dr. Michele Roberts Casey, a primary care physician, made the leap from private practice to WakeMed in April. The hospital system offered her a competitive salary, a bonus based on how many patients she saw, and a promise to handle all of the administrative services for the practice -- billing, claims processing, help negotiating payments from insurers, retirement benefits and even a new electronic health records system.

"We spend so many hours doing administrative work in the [private practice] world. It's very frustrating," says Casey, 41. "We don't have that here. We can focus on patients. We can take good care of our patients, and they can remain our priority."

Joining WakeMed looked like a good deal to Casey. She and three colleagues had decided to leave the practice they were in and strike out on their own, but the reality of opening a new business changed their minds.

"We were looking at property in the city and electronic health records systems, and it was a little bit overwhelming to look at the number of different things that you have to tackle to start a practice," she says.

This isn't the first time hospitals have gone doctor shopping. In the 1990s, they went on a buying frenzy. Dr. Bill Jessee, president and chief executive officer of the Medical Group Management Association, remembers the experiment as something of a disaster.

Because hospitals often put the doctors on flat salaries without the financial incentive to see more patients, doctors "weren't working as hard as they were before their practice was acquired." In fact, Jessee adds, "the first thing a lot of physicians did is take a vacation."

Hospitals lost a lot of money and ended up divesting most of the practices. This time, hospitals are providing incentives like some of those Casey receives, such as bonuses based on how many patients they see. 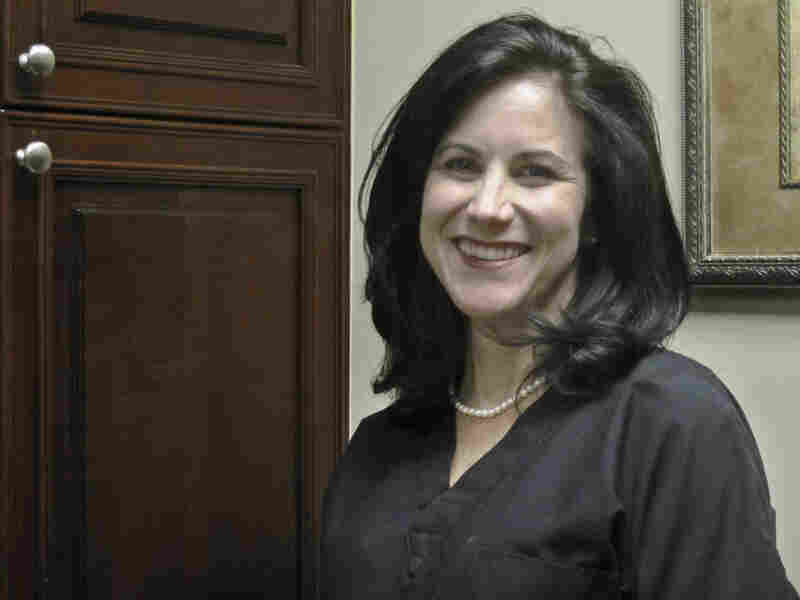 Dr. Lisa Roberts stands in a meticulously decorated exam room at her private gynecology practice in Raleigh, N.C. She says she enjoys being a small-business owner "as much as I love going to the O.R. to operate or just to see my patients for routine visits." Jenny Gold hide caption

But the local hospitals won't get all the doctors -- certainly not Casey's sister, Dr. Lisa Roberts, 40, who owns a gynecology practice around the corner from WakeMed and prizes her independence.

The office she opened about nine years ago in the middle of a strip mall is meticulously decorated with vases of dried flowers, curtained-off dressing areas and a beverage bar in the waiting room. Patients, Roberts says, should think "that they're in a spa rather than in a physician's office."

Designing and managing the practice takes a great deal of her time. But Roberts, a business major in college, says she enjoys being a small-business owner "as much as I love going to the O.R. to operate or just to see my patients for routine visits."

Meanwhile, she's watching to see how her sister's hospital practice works out. Hospitals have indeed changed their approach since the doctor-buying days of the 1990s, she says, "but we haven't seen that they can run a successful practice yet. And I know I can run a practice."

Choosing between private practice and working at a hospital may be a weighty decision for doctors, but patients may not notice much of a difference.

Janice Seitzinger has been a loyal patient of Casey's for five years and stayed with her when she took a job at WakeMed. The office has changed, but not her care. "I mean, she's the same," Seitzinger says. And now there's the added convenience of having lab tests done in the office, rather than driving to another location.

WakeMed hopes that sooner or later, patients will notice an improvement in their care. The hospital currently employs about 138 doctors and plans to hire another 60 over the next six months. In 2000, WakeMed employed just 47.

Dr. Susan Weaver, who hired Casey and oversees all of the physician practices at WakeMed, says employing doctors is "about how you can really work together to elevate the quality of care while keeping costs down. Medicine's going to change, and we're going be prepared to change with it."

The idea is that by teaming up, doctors and hospitals can avoid repeat tests and offer the best possible care at the lowest price. It's a notion that has long been percolating in the health care field, but Weaver says the new health law is accelerating the process, in part by "making physicians nervous."

"They're sensing that change is necessary and they want and desire and need perhaps a partnership with a health system," Weaver says. "So our timetable to get there into an accountable care and truly clinically integrated system has sped up."

Sounding a cautionary note, Paul Ginsburg, president of the nonprofit Center for Studying Health System Change in Washington, D.C., says insurers and their customers can get stuck with higher prices for doctors' care. That's because hospitals that employ doctors generally have more negotiating clout with insurers than doctors working in private practice. The price difference can be so big, Ginsburg says, that hospitals can pay the doctors more and "still have something left over" for themselves.

But, Ginsburg says, if doctors and hospitals can work together to avoid repeat tests and unnecessary procedures, it could both improve the quality of care and even save money. And, he says, that will be a good thing for patients long term.