From The Vienna State Opera 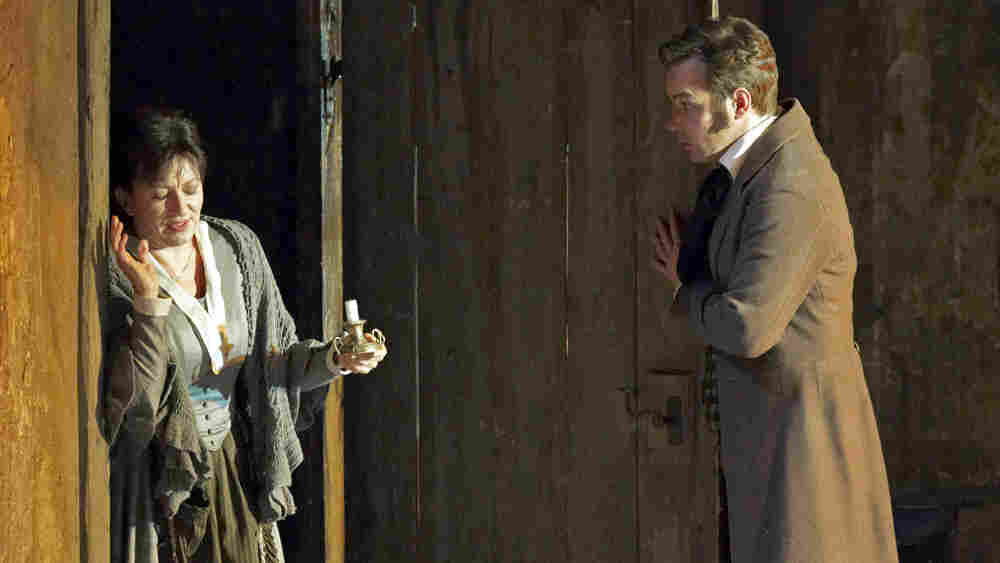 When Mimi (Krassimira Stoyanova) comes upstairs to borrow a candle from Rodolfo (Stephen Costello), they are immediately attracted to each other. Michael Poehn/Wiener Staatsoper hide caption 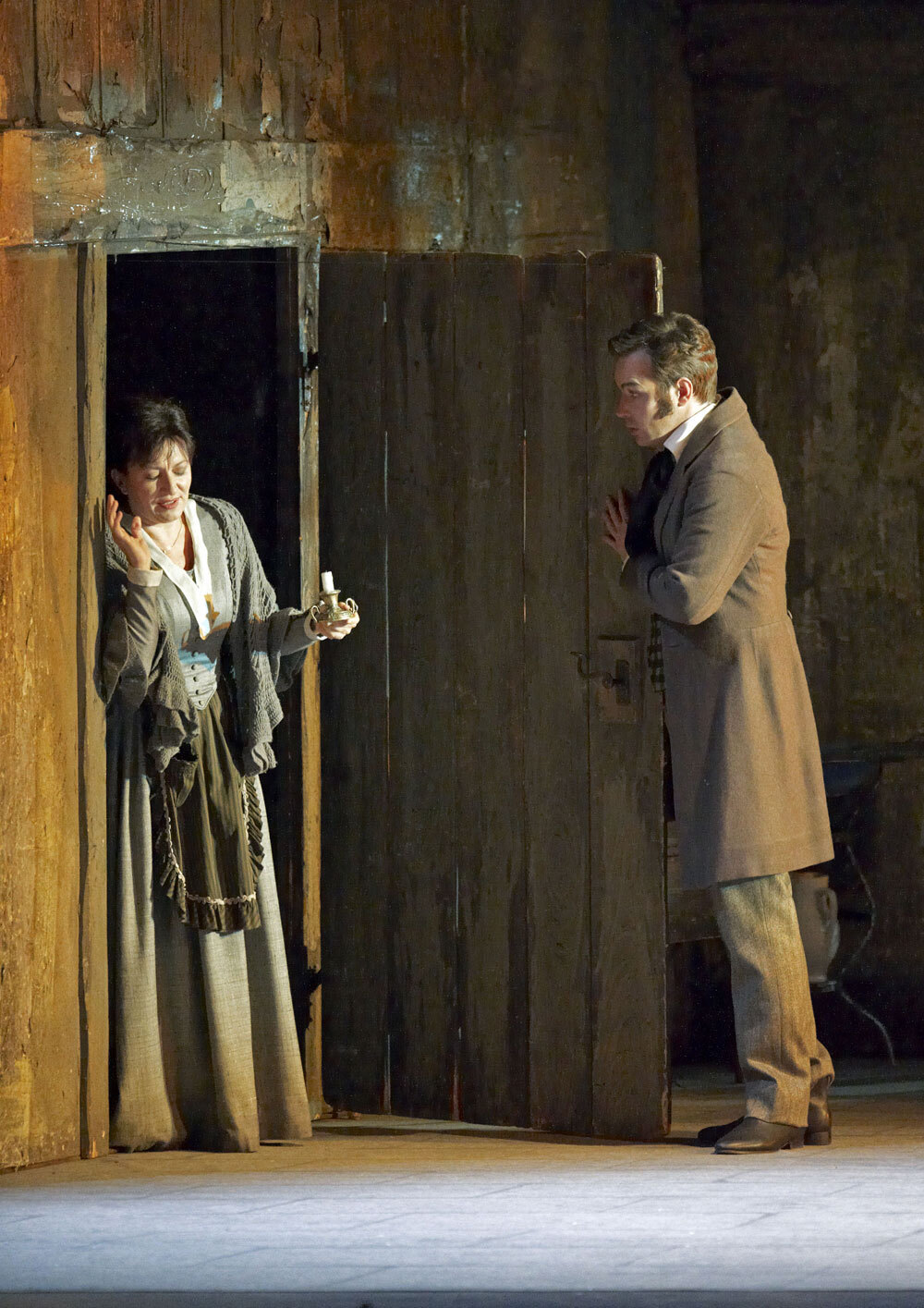 When Mimi (Krassimira Stoyanova) comes upstairs to borrow a candle from Rodolfo (Stephen Costello), they are immediately attracted to each other.

For a long time -- centuries, actually -- opera was dominated by larger-than-life characters: kings and queens, gods and goddesses, mythic figures with power over life and death. The challenge for composers and librettists was to give these legendary characters common feelings -- to put little sorrows in great souls -- so the ordinary humans who bought opera tickets could identify with the on stage dramas.

But as opera became a more and more popular form of entertainment, that changed. Composers turned to stories about simpler, more realistic characters, creating a whole new set of challenges in the process -- and nobody knew that better than Giacomo Puccini.

Puccini once said that his success came from putting "great sorrows in little souls." His operas tell us that at some point in their lives, people everywhere, in all walks of life, endure the same trials: love and envy, loss and heartbreak. That's especially true in La Boheme, a story set among struggling artists in the Latin Quarter of Paris.

Boheme is a drama of everyday events and common people. The characters are familiar, maybe even routine. The same is true of many other Puccini operas, which may be why the composer has always had his detractors. Certain critics have analyzed his music and his stories and concluded that his operas are too easily enjoyable, and maybe not intellectual enough, to justify Puccini's great success. And it would be easy to argue that composers such as Mozart, Verdi and Wagner all produced operas far more complex and innovative than Puccini's -- great operas that work on so many levels that they both invite analysis, and defy it. By comparison, some say, Puccini's dramas seem overly simple and straightforward.

But that conclusion itself may also be too simple. Regardless of his methods, Puccini mastered the unique and mystifying synthesis of music, drama and stagecraft that only opera can deliver, and with powerful results. His enduring, popular dramas are graced by appealing and believable characters whose feelings are portrayed so deeply and so vividly that, as we look on, their emotions soon become ours as well, and their heartbreaks seem as wrenching as our own.

On World of Opera, host Lisa Simeone presents a production of La Boheme, from Vienna, that produced a real life drama for one of its lead singers, the young American tenor Stephen Costello. The acclaimed tenor Rolando Villazon had been scheduled to star in the role of Rodolfo, but persistent vocal problems forced him to withdraw. Costello, a Philadelphia native and winner of the 2009 Richard Tucker Award, was called in on short notice and sang on opening night to enthusiastic ovations, making his Vienna State Opera debut alongside soprano Krassimira Stoyanova as Mimi.

The Story of La Boheme 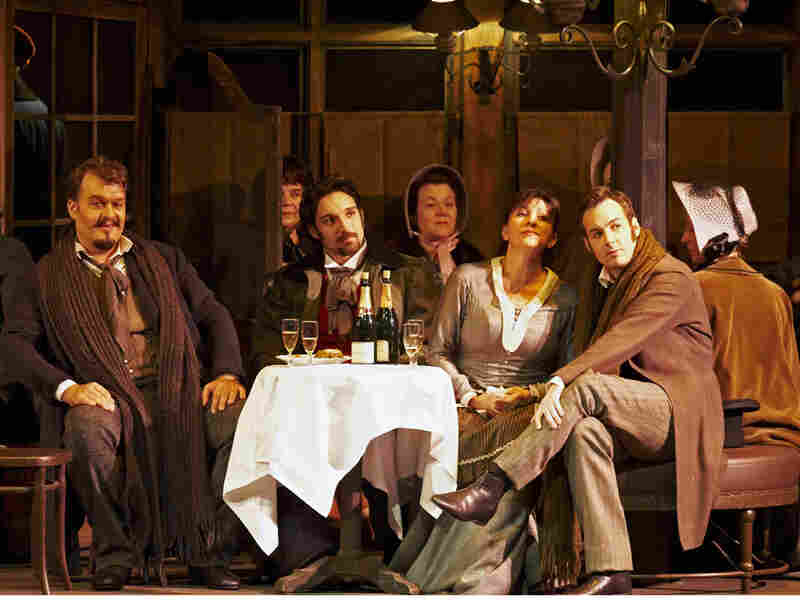 The Bohemians all head out to the Cafe Momus for drinking and fun. One problem: no one has the money to pay the bill. Michael Poehn/Wiener Staatsoper hide caption 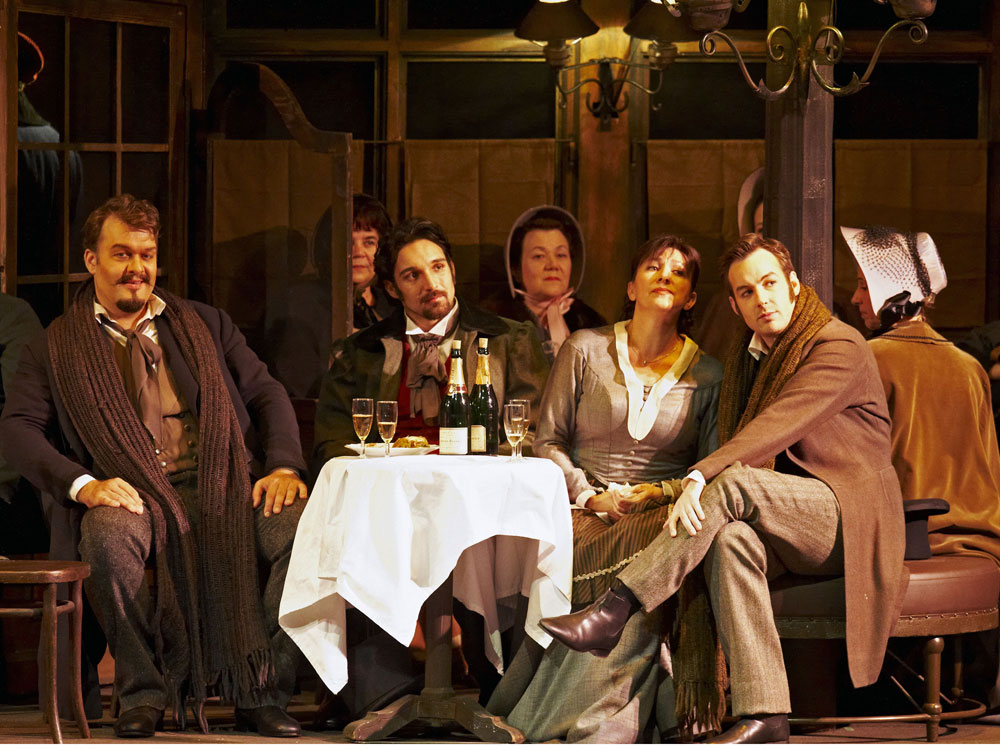 The Bohemians all head out to the Cafe Momus for drinking and fun. One problem: no one has the money to pay the bill.

The opera's familiar story is set in the Latin Quarter of Paris. As Act One begins, two struggling young artists, the poet Rodolfo and a painter, Marcello, are working in their shabby, unheated apartment. They're joined by their fellow bohemians, Colline and Schaunard, a philosopher and a musician. Their landlord demands rent, but they put him off and everyone decides to go out drinking — except for Rodolfo. He'll stay home to finish his work.

When Rodolfo is alone, there's a knock at the door. It's Mimi, a young seamstress who's looking for candle. Rodolfo invites her in, and they get to know each other through two very famous arias. Rodolfo introduces himself, and his dreams, in the aria "Your little hand is cold" — "Che gelida manina." Her introduction is the aria, "Mi chiamano Mimi" — "My name is Mimi." The situation is ripe for romance, and the two are quickly drawn to each other. But soon there are shouts from the street, and they go off to join Rodolfo's friends.

In Act Two, Rodolfo and Mimi join the others at a busy Cafe. We also meet Marcello's off-and-on girlfriend, Musetta. Tonight, she has a wealthy escort named Alcindoro. Still, her lively aria is clearly meant to get Marcello's attention. When Marcello responds, Musetta makes a scene, driving Alcindoro away. But when the bill comes, no one has the money to pay it. So the bohemians take off. When Alcindoro returns, looking for Musetta, he gets stuck with the tab.

Act Three takes place outside a tavern, a roadhouse on the outskirts of Paris, during the wee hours of the morning. It's dark, and snowing.

Mimi appears. She's pale, and stricken by a terrible, wracking cough. When Marcello comes out of the tavern, Mimi tearfully tells him that Rodolfo's jealousy is making their relationship unbearable. When Rodolfo emerges, Mimi hides in the shadows. She listens while Rodolfo explains to Marcello that he does have fits of jealousy — but they're really phony. He only does it to get away from Mimi, when he can't bear her obvious illness and suffering.

Mimi's coughing gives away her hiding place, and Marcello goes back into the tavern to be with Musetta, leaving Rodolfo and Mimi alone. They reluctantly agree to separate. But when Marcello and Musetta come out of the tavern noisily, their quarrel moves Mimi and Rodolfo to stay together. The quartet that ends the act reveals two intense, but very different relationships. 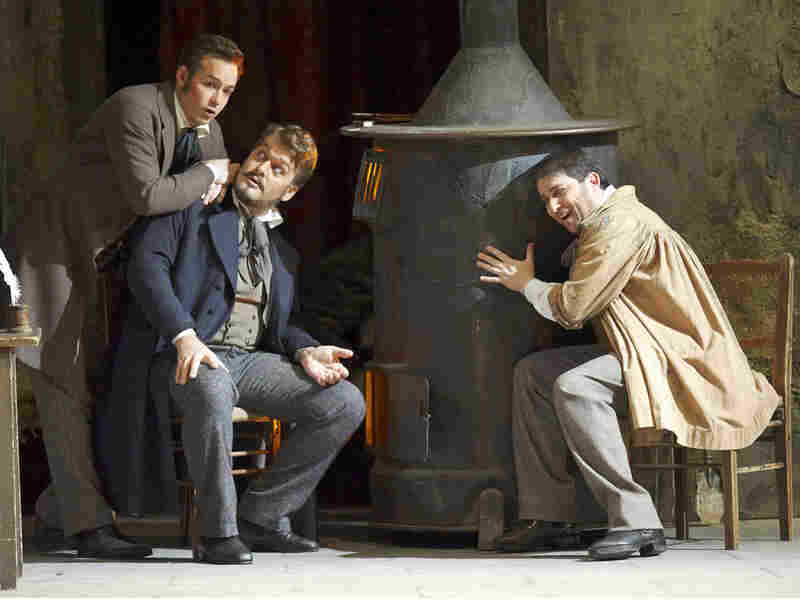 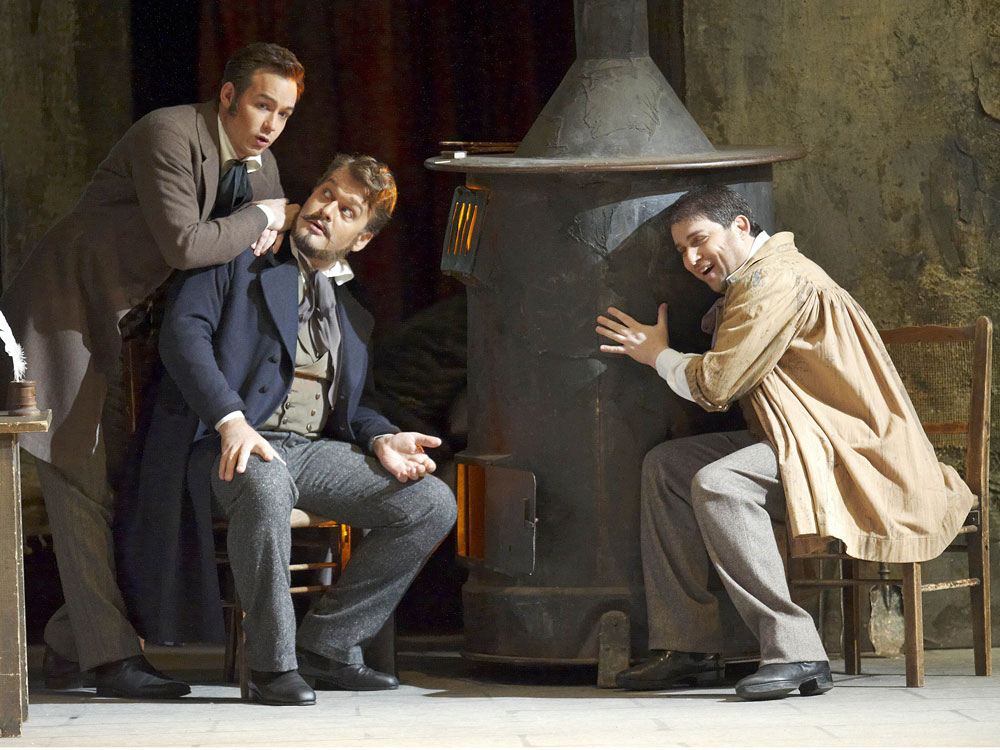 Act Four takes place in the cold, ill-kept apartment where the opera began. Rodolfo and Marcello are working, but their minds are on their lovers. Colline and Schaunard return with some food, and the scene turns jolly.

The mood changes quickly when Musetta arrives with Mimi, who is plainly dying. Her friends try to scrape some money together to get help. Musetta takes off her earrings and gives them to Marcello, to sell for medicine and a doctor. Colline decides to part with his favorite overcoat, bidding it farewell in one of the opera's most moving arias.

When Rodolfo and Mimi are left alone, they tenderly recall their first meeting — in this same apartment. The others return, and they all try to make Mimi more comfortable. But she grows quiet, and dies, leaving Rodolfo despondent at her side.