Accessibility links
Apathy Rules Among Brazil's Youth Voters Brazil is one of a handful of places in the world where the voting age is just 16. Brazilian teenagers were once ecstatic about their hard-earned suffrage. Now, increased economic and political stability means that they just aren't that into politics. 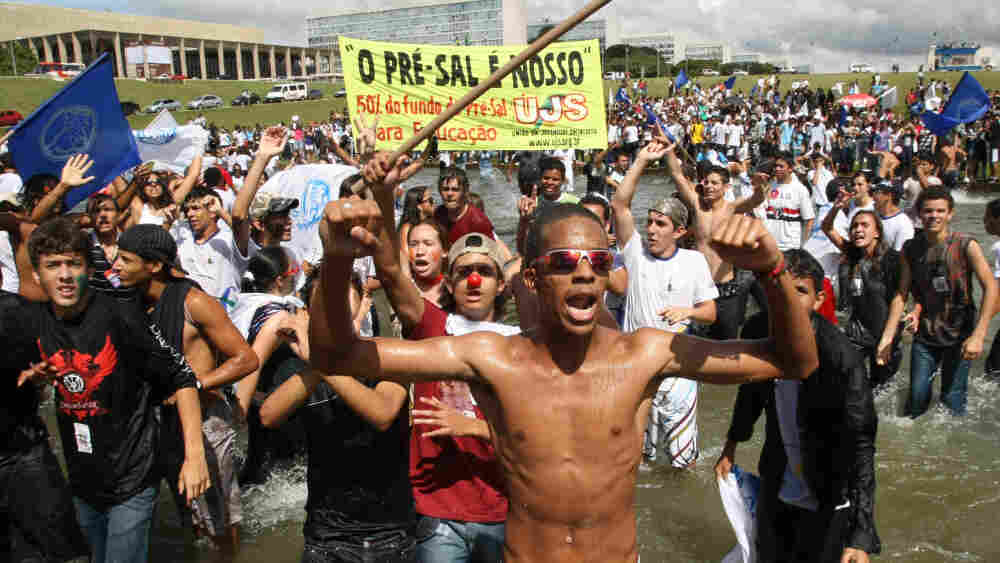 Hundreds of students demonstrate in Brasilia in March, demanding that the Brazilian government devote more money to education spending. But as the country gears up for presidential elections Sunday, apathy prevails among youth in Brazil, where the voting age is 16. Adriano Machado/AFP/Getty Images hide caption

In Brazil, people can vote in elections at age 16, one of just a few countries in the world with such a young voting age.

Brazilian teenagers were ecstatic about their hard-earned suffrage just a few decades ago. But as Brazil prepares for national elections on Sunday, the country's increased economic and political stability means that many young people aren't planning to use their vote.

On a Saturday afternoon in the Lapa neighborhood of Rio de Janeiro, an area popular with young artists and musicians, people are having lunch with their friends. Paint is peeling off many buildings, and the streets are lined with eclectic bars. 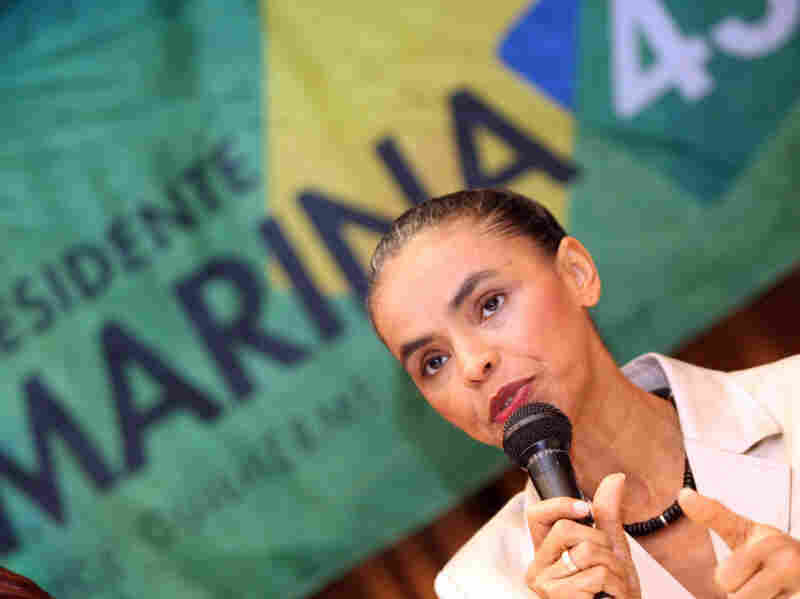 The Green Party's presidential candidate, Marina da Silva, attends a press conference Thursday in Rio de Janeiro. The former environmental minister is popular among Brazilian youth. The environment is one of the issues teenagers say they care about. Fabio Motta/Agencia Estado via AP hide caption

Renato Cinco has a busy day of meetings. The 36-year-old sociologist is running for a seat in Brazil's Congress in Sunday's general election. His progressive platform includes the legalization of marijuana to combat crime.

He has a big following in the youthful Lapa district, and a local reggae bar has donated space for him to hold meetings.

Cinco, who has been politically active since he was 12, grew up during dictatorship, and student movements were key to bringing in democracy in 1985. When the Constitution was rewritten in 1988, it became legal to vote at 16.

Cinco remembers how important the student movement used to be.

"The student movement might have been Brazil's first organized social movement. It was even around centuries ago, and students participated a lot in the movement to end slavery," he says. "And up until recently, the student movement was one of the main breeding grounds for politicians."

Student Activism Now The Exception, Not The Rule

But today, the enthusiasm and participation seem to be waning. Some teenagers are still active, like 19-year-old Thiago Tomazine, who's working on Cinco's campaign. But he says he's an exception.

"Activism is great, but most of my friends say, 'You're going to vote? Stop joking, go to the beach, why would you vote?' " he says. "I believe very few people my age vote. They're disillusioned."

Constitutional law professor Alvaro Palma de Jorge and other analysts say fewer than half of youths ages 16 to 18 use their vote. In any given election, analysts say, 16- and 17-year-olds are only 1 percent to 2 percent of total voters.

Palma de Jorge says he is surprised by the figures. He remembers the first time he voted.

"I was 16 in 1989, and when I was going to vote for president for the first time, my mother came with me, and she was voting for the first time as well. It was a great moment of national life, everybody was so excited that democracy was coming back," he recalls.

Palma de Jorge says now the apathy of many young people is due largely to Brazil's political and economic stability -- which means youth aren't forced to consider their rights or how they got them.

Political Interests Of Young Changing, Too

In this year's presidential race, many of the young voters who are participating are rallying around Green Party candidate Marina da Silva (no relation to President Luiz Inacio Lula da Silva), a woman from Brazil's Amazon region, who's running on an environmental platform.

One of her campaign videos shows young people dressed in earthy colors, dancing to a song by a well-known Brazilian pop singer.

Support among the young for the leading candidate, Dilma Rousseff, the hand-picked choice of current President Luiz Inacio Lula da Silva, is also high -- higher, in fact, than among the general population.

On a recent day, Vanessa Rodrigues, 16, is skipping class with her best friend. She says the environment is the main issue people her age think about; others cite issues related to education -- cost, quality, availability.

But Rodrigues isn't interested in elections, and listening to her, you would never know that just a few decades ago Brazil's students fought for their right to vote.

"I think it's really cool that we can vote at 16, because other countries you can't -- like in the United States. It's a nice difference," she says.

But, she adds that she thinks politicians are corrupt and doesn't see why she should vote. So on voting day, Rodrigues, like many Brazilian teenagers, won't be at the polls.