Accessibility links
In The Search For 'Last Speakers,' A Great Discovery In 2008, linguist K. David Harrison traveled to Arunachal Pradesh, a remote region in northeast India, where he discovered a hidden language: Koro. A few hundred people speak Koro, Harrison says, and those who speak it didn't notice how distinct it was. He documents this language, and his efforts to help revitalize dying languages, in his new book, The Last Speakers. 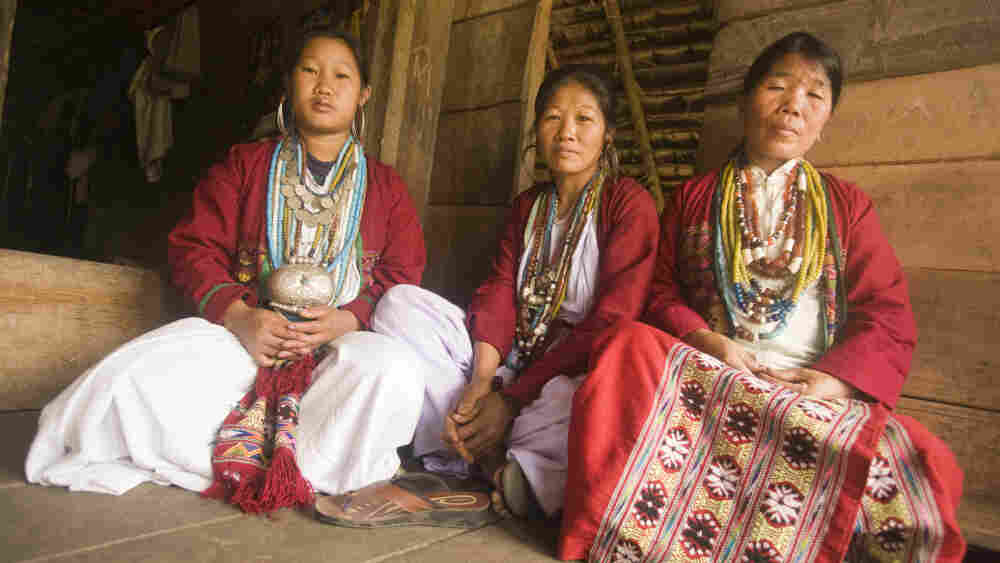 Three speakers of the newly identified language Koro gather at a house in Kichang village in Arunachal Pradesh, India. K. David Harrison discovered the language in 2008, which has a few hundred speakers. "It has basically been completely unnoticed by outsiders and by scientists," he says. Courtesy of Chris Rainier hide caption 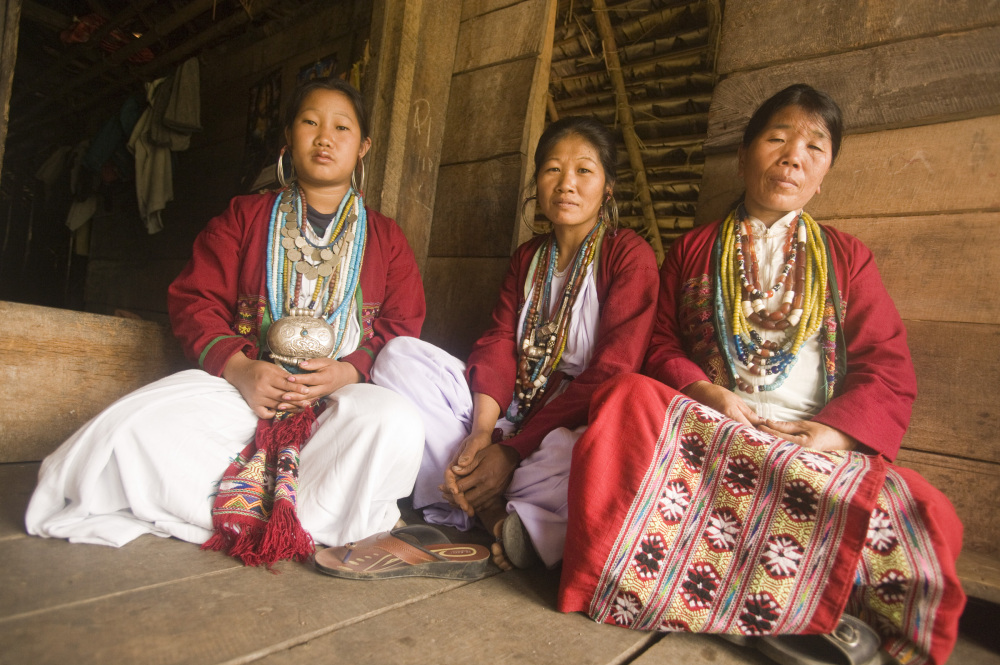 Three speakers of the newly identified language Koro gather at a house in Kichang village in Arunachal Pradesh, India. K. David Harrison discovered the language in 2008, which has a few hundred speakers. "It has basically been completely unnoticed by outsiders and by scientists," he says.

In 2008, K. David Harrison traveled to Arunachal Pradesh, India, a northeast region so remote even Indians need permits to travel there -- and he made an incredible discovery.

The Swarthmore College linguist and his colleague Greg Anderson were searching for speakers of two little-known languages -- Aka and Miji. And as they went door to door, they were surprised to find speakers of a third, hidden language: Koro.

"It hadn't previously been noticed in the Indian census or in any study of the languages of India," Harrison tells NPR's Mary Louise Kelly. "It wasn't listed in any listing of the world's languages. It had basically been completely unnoticed by outsiders and by scientists."

While going to record little-known languages in Arunachal Pradesh, India, linguist K. David Harrison discovered a language that hadn't previously been documented. A few hundred people speak Koro near Bana village. Here are some sound bites of the "hidden language" that Harrison calls "an enigma" because it has managed to survive. Harrison says it seems to be a tone language with short, melodic syllables.

A few hundred people speak Koro, Harrison says, and those who speak it didn't notice how distinct it was.

"They tended to think of it as merely a dialect of another local language," Harrison says. "But when we sat down to make recordings, we realized that they sounded as different from each other as English and Japanese."

So Harrison took the first known set of recordings of the language. He documents these and other dying languages -- and his attempts to revitalize them -- in his new book, The Last Speakers.

There are more than 7,000 languages in the world, and nearly half of them are in danger -- likely to die out within our lifetime. In fact, one disappears about every two weeks. When languages die, they take with them a vast amount of human knowledge, Harrison says, from how to make medicines out of plants, how to survive in harsh environments, and creation myths and personal histories. The languages aren't written down -- they're transmitted orally.

"So it's very fragile, and [the knowledge base] is being forgotten as these languages fade away," he says.

In researching the book, Harrison says he realized how important it was to help some of the communities revitalize their languages. 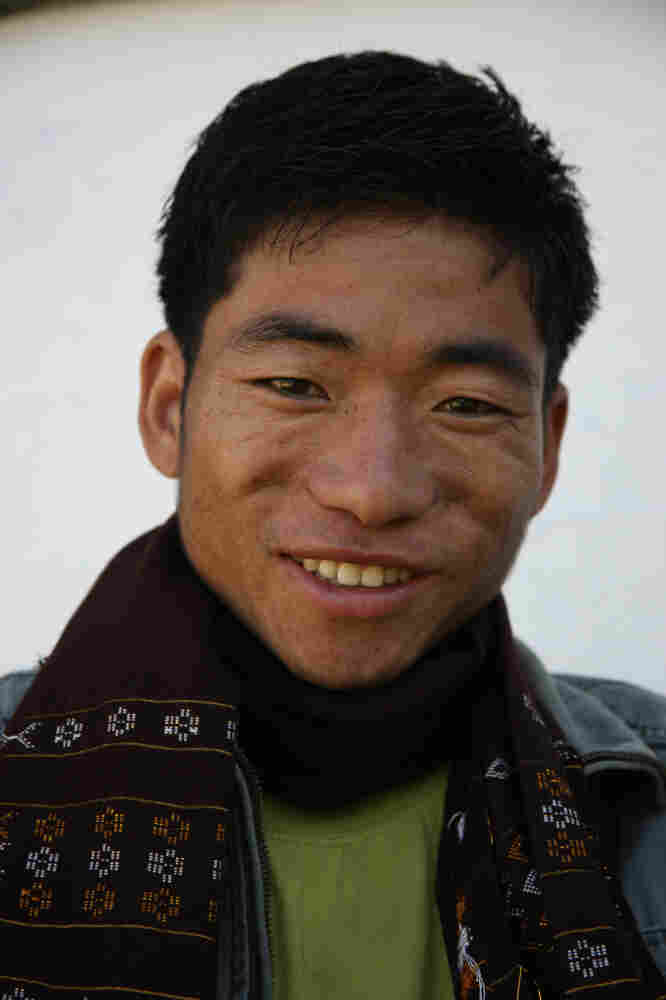 Sange Degio of the Kichang village in Arunachal Pradesh, India, is one of a few hundred speakers of Koro. Courtesy of Chris Rainier hide caption

"People really do value their languages," he says. "And ... the decision to give up one language or to abandon a language is not usually a free decision. It's often coerced by politics, by market forces, by the educational system in a country, by a larger, more dominant group telling them that their language is backwards and obsolete and worthless."

The key players in language revitalization are the 5- and 6-year-olds in the communities, Harrison says.

"They're like little barometers of social prestige, and they understand that if two languages are spoken in their environment, and one of them is more highly valued, they will gravitate toward that more highly valued language," he says. "So the key to saving a language is to create prestige of the language in the eyes of the very youngest speakers. The way you do that is to put it in a high-tech medium -- we create, for example, talking dictionaries. People can do creative things like producing hip-hop or poetry in the language."

Koro is closely intermixed by marriage and household with Aka, which has 1,200 speakers. Both are positively widespread compared with Chulym -- a Siberian language that only eight people still speak. Chulym is not a candidate for revitalization because so few people speak it that "it's not likely new speakers will emerge."

Sometimes a hidden language, like Koro, survives on its own. But Harrison doesn't know its secret to survival.

Saving Dying Languages In 'The Linguists'

"Koro is really an enigma," he says. "There's no obvious reason why a language spoken by just a few hundred people and completely culturally assimilated to a larger, more dominant group should persist at all."

The rate of language extinction, however, is greatly outpacing the rate of new languages, Harrison says. "I would say this is going to be one of the most consequential social trends of the next couple of decades -- is people keeping and preserving and revitalizing some of the world's smallest languages."