Accessibility links
Come With A Grocery List, Leave With A Flu Shot Last year, the H1N1 flu pandemic forced many Americans to scramble -- sometimes in vain -- to get vaccinated against it. This year, more places are offering flu shots than ever before, and more than a third of U.S. adults are getting their shots in locations other than a doctor's office -- places like grocery stores or even car dealerships.

Listen
Come With A Grocery List, Leave With A Flu Shot 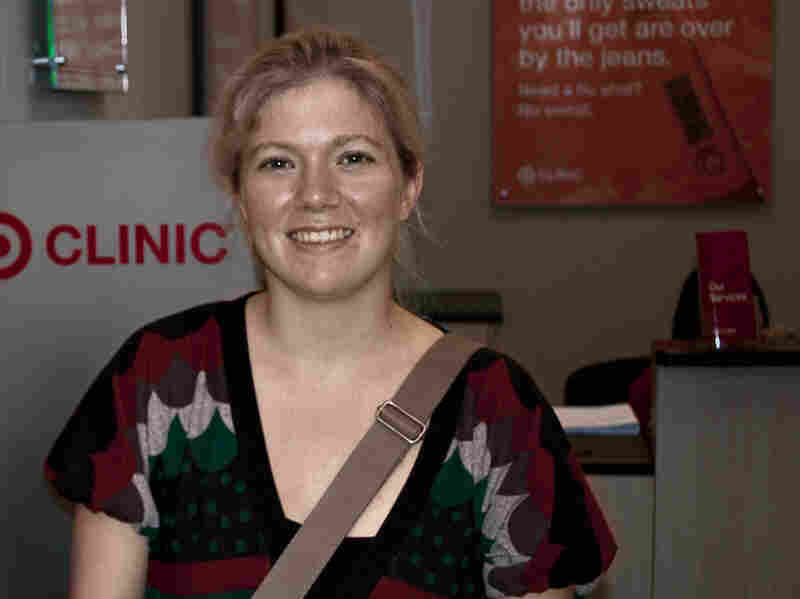 Lisa Brown, a 28-year-old graduate student at Northwestern University, stopped by a Target in Evanston, Ill., to buy school supplies and ended up also getting a flu shot. Jay Field hide caption

Lisa Brown, a 28-year-old graduate student at Northwestern University, was shopping at a Target in Evanston, Ill., when she came across a product she hadn't seen in the store before: flu shots.

There are more places offering flu shots now than ever before, and more than a third of U.S. adults are now getting their shots in places other than a doctor's office.

Initially, there weren't enough H1N1 vaccines last fall to meet demand. With the strain’s emergence, manufacturers had to suddenly stop producing the annual flu vaccine and switch to making a new one. Some Americans who wanted shots had to wait months for those to become available.

But health officials say this year will be different.

"Manufacturers have been able to make an abundance of vaccine and been able to deliver it early," says Dr. William Schaffner, an infectious disease specialist who chairs the Department of Preventive Medicine at Vanderbilt University School of Medicine.

This year's vaccine protects against three strains of flu virus, including H1N1. The vaccine is now available at grocery stores, retailers, pharmacies and work sites. And most insurance companies cover the cost of the flu shot, no matter where it's given.

Here are some places you may not expect to find one.

Check flu.gov or findaflushot.com for some options in your area.

"There are places where you don't even have to get out of your car," Schaffner says. "You can drive through, stick your arm out the window and get vaccinated."

On Oct. 17, for example, health officials have scheduled a drive-through flu shot clinic at Kindle Auto Plaza in Cape May Court House, N.J. But are these retail sites as safe as a doctor's office? Well, so far, Schaffner says, there've been no reports of imposters offering flu shots.  Even so, it's a good idea to check and make sure whoever's offering the shot is a licensed health care worker.

This year, the federal Centers for Disease Control and Prevention recommends that everyone older than six months receive the flu vaccine. The only people who should not get the vaccine are those who might suffer a bad reaction because they have severe egg allergies -- the vaccine is grown in eggs.

It's critical for all eligible individuals to receive the vaccine because certain vulnerable populations need to be "cocooned," says Dr. Gregory A. Poland, the director of the Mayo Clinic's Vaccine Research Group who was on the panel that advised the CDC to make the recommendation.

"For very young infants, the elderly and people with weakened immune systems, the vaccine simply won't be effective," he says.

Poland says these groups cannot produce antibodies they need after getting the vaccine.  So, he says, the only way we can protect them is to have the people around them protected against influenza.

The government's goal of vaccinating everyone older than six months is a massive undertaking, which Poland says could not be handled by doctors, health clinics and hospitals alone. That's why it's so valuable that thousands of grocery stores, pharmacies, retailers and work sites have stepped up to the plate, he says.

Poland's only concern about moving vaccinations to nonmedical settings is a potential disruption to the doctor-patient relationship.

"When you go to a department store to get your flu vaccine, then I, as a physician, don't have the opportunity to say, you know, 'Mrs. X, because of your age and your diabetes, you should also be considering pneumococcal vaccine, and oh, by the way, you're also due for your mammogram and pap smear,' " he says.

Schaffner hopes the 2010-2011 flu season won't produce a new strain of flu like last year. And if the majority of Americans get the annual vaccine, he says, the nation should be in good shape.