Accessibility links
Student's Suicide Highlights Bullying Over Sexuality Rutgers freshman Tyler Clementi jumped off a bridge after a recording of his sexual encounter with a man was broadcast online. Two students have been charged with invading his privacy. 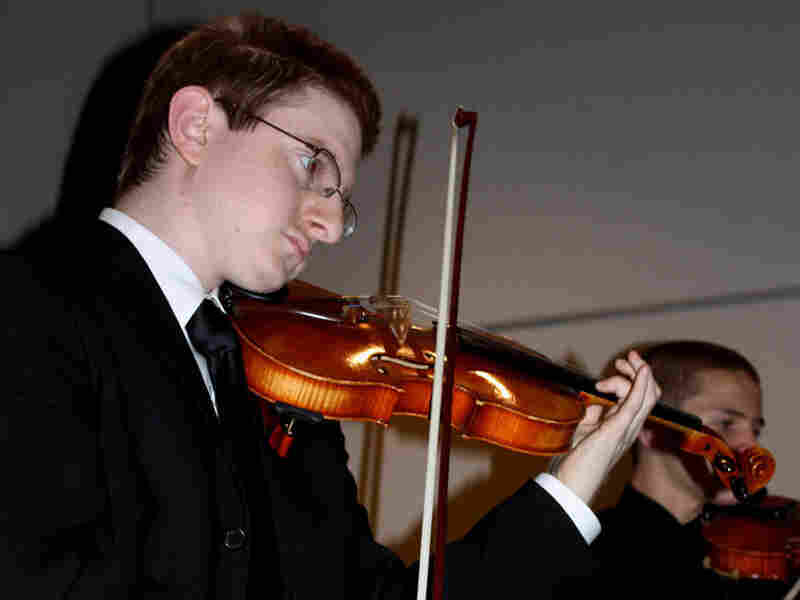 In this 2009 photo, Tyler Clementi plays violin with the Ridgewood High School Orchestra at a benefit dinner. Authorities say Clementi, a Rutgers University freshman, killed himself a day after two classmates surreptitiously recorded his sexual encounter with a man in his dorm room and broadcast it over the Internet. The Record (Bergen Co., N.J.) /NorthJersey.com hide caption

The suicide of a Rutgers University freshman whose sex life was broadcast over the Web stirred outrage and remorse from classmates who said they wished they could have stopped him from jumping off a bridge last week.

"Had he been in bed with a woman, this would not have happened," said Lauren Felton, 21, of Warren, N.J. "He wouldn't have been outed via an online broadcast, and his privacy would have been respected, and he might still have his life."

Gay-rights groups say Tyler Clementi's suicide makes him a national example of a problem they are increasingly working to combat: young people who kill themselves after being tormented over their sexuality.

A lawyer for Clementi's family confirmed Wednesday that he had jumped off the George Washington Bridge last week. His body was identified Thursday.

The lawyer has not responded to requests for comment on whether Clementi was open about his sexual orientation.

Clementi's roommate, Dharun Ravi, and fellow Rutgers freshman Molly Wei, both 18, have been charged with invading Clementi's privacy. Middlesex County prosecutors say the pair used a webcam to surreptitiously transmit a live image of Clementi having sex on Sept. 19, and that Ravi tried to webcast a second encounter on Sept. 21, the day before Clementi's suicide.

A lawyer for Ravi, of Plainsboro, N.J., did not immediately return a message seeking comment. It was unclear whether Wei, of Princeton, N.J., had retained a lawyer.

Collecting or viewing sexual images without consent is a fourth-degree crime. Transmitting them is a third-degree crime with a maximum prison term of five years.

ABC News and The Star-Ledger of Newark reported that on Sept. 22, Clementi left a note on his Facebook page that read: "Jumping off the gw bridge sorry."

Even if the young violinist from Ridgewood was not well-known at his new school, his death stirred outrage.

"I thought it was kind of ridiculous -- just the fact that in this day and age, that this occurred," said student Oscar Mordkovich, who didn't know Clementi personally. "Maybe if this was 50 years ago, it would be somewhat understandable. But to do that to somebody, especially your roommate, I think is just outrageous."

"I think everyone on campus will take a moment to think on this, reflect. Hopefully it’ll be a learning lesson, a chance for people to mature," she said. "Hopefully [it will] create a dialogue, because that’s all we can really hope for." 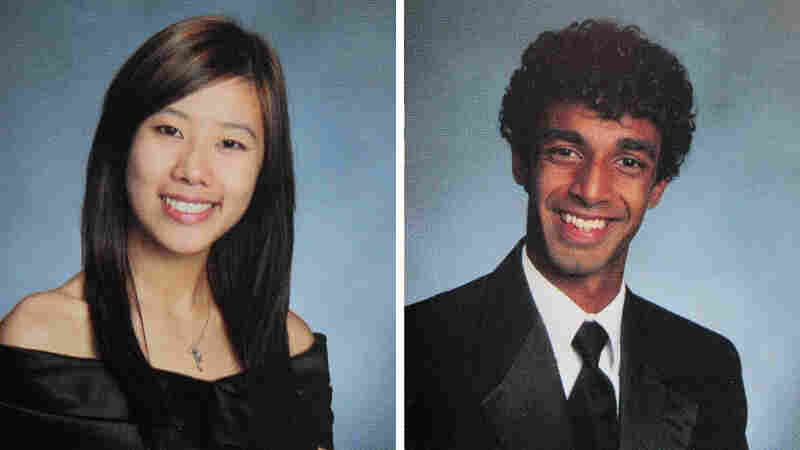 toggle caption
Courtesy of The Star-Ledger

Others are hoping for justice.

"I think it's such an invasion of privacy," said junior Sarah Harnett. "I think it's terrible what they did to him. I hope they get the maximum, like five years in prison. I really do."

About 100 people gathered Wednesday night for a vigil on campus. They lay on the ground and chanted slogans like, "We're here, we're queer, we're not going home."

Why Do Cyberbullies Bully?

Justin Patchin, co-director of the Cyberbullying Research Center, an online clearinghouse of information, says youths who engage in cyberbullying often genuinely don't realize the harm that could come from posting certain information online. In an interview with Melissa Block for All Things Considered, he offers these reasons for youths engaging in cyberbullying:

Several gay-rights groups linked Clementi's death to the troubling phenomenon of young people committing suicide after being harassed over their sexuality.

On Tuesday, a 13-year-old California boy died nine days after classmates found him hanging from a tree. Authorities say other teens had taunted the boy, Seth Walsh of Tehachapi, for being gay.

Steven Goldstein, chairman of Garden State Equality, said in a statement that his group considers Clementi's death a hate crime.

"We are heartbroken over the tragic loss of a young man who, by all accounts, was brilliant, talented and kind," Goldstein said. "And we are sickened that anyone in our society, such as the students allegedly responsible for making the surreptitious video, might consider destroying others' lives as a sport."

Last week, Dan Savage, a columnist at the Seattle weekly newspaper The Stranger, launched the latest of several efforts to try to stem the problem: the It Gets Better Project, a YouTube channel where gay, lesbian and bisexual adults share the turmoil they experienced when they were younger — and that their lives are better now.

In response to Clementi's death and other incidents, the group Parents, Families & Friends of Lesbians and Gays said it would issue a "call to action" on the subject on Thursday.

In a letter to the Rutgers University campus, President Richard McCormick wrote: "If the charges are true, these actions gravely violate the university's standards of decency and humanity." Coincidentally, the university on Wednesday was launching a new two-year Project Civility, designed to get students thinking about how they treat others.

Gregory Blimling, vice president for student affairs at Rutgers, said federal law prohibits him from talking about Clementi's sexuality, but he insisted Rutgers is a welcoming place for all of its students.

"We are fully engaged with our LGBT [lesbian, gay, bisexual and transgender] community," he said. "We have a variety of programs and activities in which we try to make this an accepting environment. We take great pride in the fact that Rutgers is one of the most diverse universities in the U.S."

Blimling points out that Rutgers has extensive suicide-prevention services, though he says it's not clear if Clementi tried to use them. But others say the university's administration isn't always sympathetic to the gay and lesbian community.

"What I know from talking to my students is that while Rutgers has done a tremendous job providing a safer space for LGBT students, it's far from a safe space," said anthropology professor Robert O'Brien. 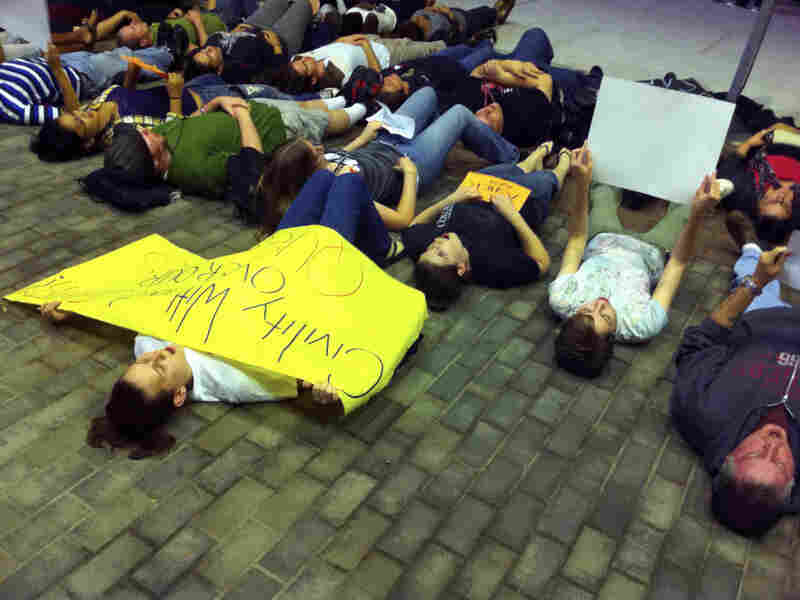 Students participate in a "lie-in" at Rutgers University, in New Brunswick, N.J., on Wednesday.  The rally was in support of safe places for gay students. Erin Vanderberg/AP hide caption

O'Brien says the university should be doing more. Gay and lesbian advocates have been lobbying the university to designate special LGBT-friendly dorms on campus, he says, but so far without success.

Goldstein of Garden State Equality says the failure here occurred long before any of the students involved got to Rutgers.

"Where was the stopgap in society that these kids faced -- whether it be parents, or classes at school, or friends, or someone to say you can't bully, you can't harass someone because they're gay or a member of any other minority community?" he said. "How did these alleged perpetrators fall through the system?"

Meanwhile, for some of Clementi's new classmates, the first time they learned much about him was when they got word of his death.

"I guess the only person I haven't talked to is Tyler 'cause he's like really quiet and shy," said Justin Lee, a freshman from Princeton who lives on Clementi's hall.

Memorial services for Clementi have yet to be announced.

NPR's Joel Rose contributed to this report, which contains material from The Associated Press.

Teens Who Have Committed Suicide After Being Bullied Online Sept. 30, 2010
Online Privacy, Suicide, And A New Cultural Norm Sept. 30, 2010