Accessibility links
Twitchy Nerves (Literally) May Explain Epilepsy, Pain Nerve cells might be able to communicate with nearby cells by leaking chemicals through their membranes, researchers say. The findings might provide a better explanation for epilepsy, chronic pain and other nervous system problems that have baffled scientists for decades. 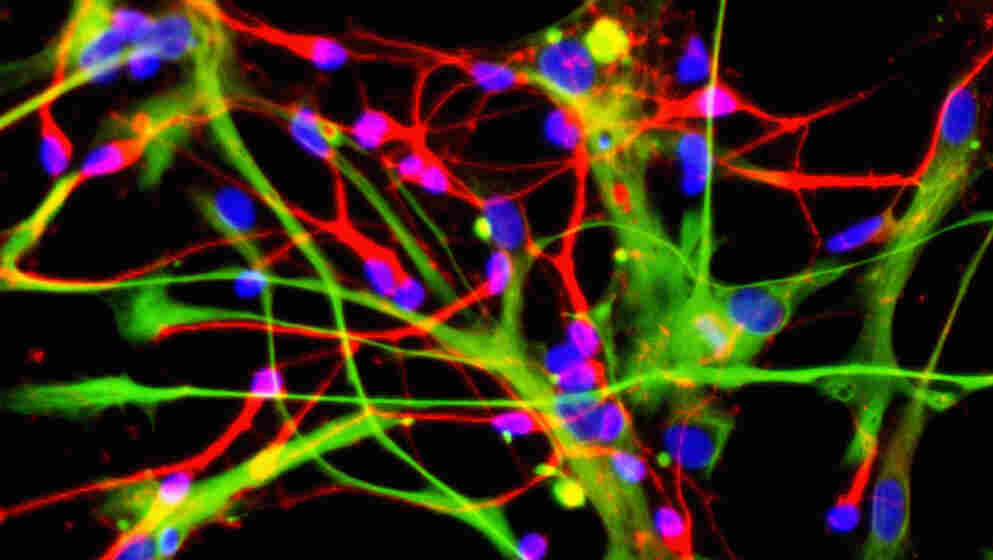 Scientists found that neurons (red) are able to leak signaling chemicals to nearby cells. The finding may help explain the cause of some nervous system conditions, including epilepsy and chronic pain. Institute for Stem Cell Research/Getty Images hide caption

Researchers may finally have a better explanation for epilepsy, chronic pain and other conditions of the nervous system that have baffled the scientific world for decades.

Neurons are the most basic unit of the communication system that runs through our body. They carry signals for almost every anatomical function, including movement, senses, pain and thought, and they reach every part of the body, from the brain to the skin to the farthest reaches of our toes.

Neurons transmit signals across our body using electricity and special chemicals called neurotransmitters. When a nerve cell is triggered, an electrical pulse travels from its large cell body down a long, slender part of the cell called an axon. The axon ends at a synapse, the small space between nerve cells where neurotransmitters carry the signal across to a neighboring nerve cell. 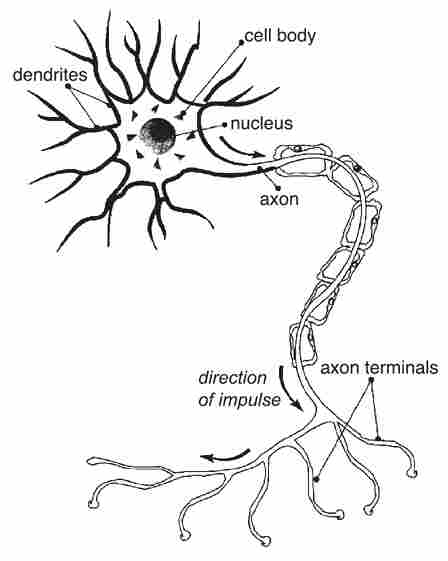 The discovery about how nerve cells communicate focuses on the ability of neurons to release chemical signals to nearby cells through the axon, a part of the cell that functions much like an electrical wire by carrying an electrical signal to another cell.

Neurological conditions including epilepsy and chronic pain seem to be triggered by the stimulation of regions of cells in the brain that aren't directly connected to each other. By understanding how these regions are communicating, researchers may be able to come up with better treatments.

The research, performed by Doug Fields at the National Institutes of Health, was based on the work of a scientist who kept asking basic questions, even as he approached his 100th birthday.

That scientist was Ichiji Tasaki, who was born in Japan and came to NIH in the 1950s. Tasaki had a sharp mind and strong body well into his 90s, says Peter Basser of the National Institute of Child Health and Human Development. Basser became Tasaki's boss in the late 1990s.

"He would walk back and forth to his house with his wife, who helped him in the laboratory every day, seven days a week," Basser says. "He was here on the weekends; he was here when it was snowing. He was an amazing man."

A Twitch In The Neuron

At the time, most scientists thought nerve cells only sent messages across a junction known as a synapse. But Fields was doing experiments that suggested nerve cells were communicating with other cells without using a synapse.

"How was that happening?" Fields says. "How could you have signaling from neurons to cells that are not neurons when our understanding of how signaling works is all based on synapses? That's the mystery."

Then one day, Fields found a clue. To explain what it was, he calls up a video on his computer. It shows an axon, the long, slender projection from a nerve cell that carries electrical impulses to the synapse.

Using a microscope, researcher Doug Fields recorded this clip of an axon "twitching" after he stimulated it to fire an electrical signal. When a nerve cell is stimulated, small pores in the cell open to allow water and chemicals in, causing it to swell. To restore the cell to its normal volume, other pores in the axon open to let out water and other chemicals.

<em>This clip is looped and has no audio.</em>

Fields wanted to see if axons might actually be releasing important signals to nearby cells. So he placed nerve cells (the circle in the video clip below) in a dish with all the enzymes and proteins that make fireflies light up, except for one — a chemical called ATP. ATP is, however, found inside axons.
To see if the axons were giving off signals, Fields stimulated the neurons with a small electrical pulse. When he did that, he observed bursts of photons (the red flashes in the video below). These little bursts of light were created by ATP from the axons reacting with chemicals in the dish.

"I was playing back a movie of an experiment in the lab in which I had stimulated the axon to fire impulses, and in that recording I saw this," Fields says, pointing to a tiny motion in the axon. "It twitched." [You can see this in the Experiment 1 video below on the left.]

When Fields saw the twitch, he was puzzled. Then he remembered that not far from his office was a man who could help him understand what he was seeing: Tasaki.

"Dr. Tasaki had measured these mechanical changes in all kinds of tissue -- in the retina, in skin," Fields says. "He even showed that the whole spinal cord of a frog twitched when an axon fired."

Tasaki told Fields that the twitch could be part of a communication system that sends a chemical messenger directly to another cell, and he helped Fields design experiments that would show whether that system existed.

One of these experiments used a high-tech microscope equipped with night vision technology. Fields put it in a black plywood box he built himself to keep out all outside light.

"It looks a little bit like a prop for a magician," Fields says, as he opens a hinged door on the box to reveal the microscope.

Fields suspected that when a nerve cell's axon twitches, it opens a channel in the cell membrane and a chemical called ATP escapes. His black box gave him a way to test this idea.

The experiment used a dish containing nerve cells and all but one of the chemicals that allow fireflies to light up the summer sky. The missing chemical was ATP, which was trapped inside each neuron.

Fields demonstrates the experiment as we watch a video image generated by the microscope.

"Stimulate the neuron and if it releases ATP we should see a burst of photons." he says. And sure enough, pinpoints of light appear on the screen. [See this happen in the Experiment 2 video to the left.]

Other experiments, all published in the journal Science Signaling, confirmed that twitching axons were, indeed, releasing ATP and maybe other neurotransmitters too. No synapse needed. Fields says this newly discovered system of cell communication does a better job explaining neurological conditions like chronic pain and epilepsy. Both involve nerve cells firing when they shouldn't, and studies show that this firing isn't triggered by signals coming across synapses, but it could be triggered by twitching axons releasing ATP, Fields says, adding that there's other evidence suggesting ATP has a role in chronic pain.

This new communication system also may be involved in controlling blood flow and the formation of myelin insulation around nerves, Fields says. That's still just speculation, Basser says, but he adds that Fields' approach represents a big step forward.

"The genius of Doug's work is that he's been able to use this basic research that Dr. Tasaki did and show its biological relevance," Basser says.

When Fields finished his paper on ATP, he eagerly walked it over to Tasaki's office. But he was too late -- Tasaki had retired the year before and died just weeks earlier at the age of 98.

1939: Tasaki publishes his first paper showing how nerve impulses leap from gap to gap in the myelin sheath. Later papers helped further illuminate the function of myelin and the speed nerve impulses can travel along myelinated nerves. This research formed the foundation of understanding the nervous system and diseases like multiple sclerosis.

1954: While at Washington University in St. Louis, Tasaki explains in a study how the components of the inner ear convert sound into neural impulses the brain can interpret. This work helped spark the field of audiology.

1968: Tasaki explores the ion chemistry involved in nerve impulse transmission. He publishes a study on the use of fluorescent dyes that light up nerve membranes as they transmit electric impulses.

2008: At his retirement at the age of 97, he is believed to be the oldest active-duty scientist in the history of the National Institutes of Health. Before his death in 2009, he published 264 papers, some when he was well into his 90s.