Accessibility links
'Great Gatsby' Onstage, With A White-Collar Twist Since its publication in 1925, F. Scott’s Fitzgerald's The Great Gatsby has been adapted for film, stage, television and even opera. Now, one ambitious New York theater company has decided to put every word of the novel onstage in a 6 1/2-hour adaptation -- and it's getting rave reviews. 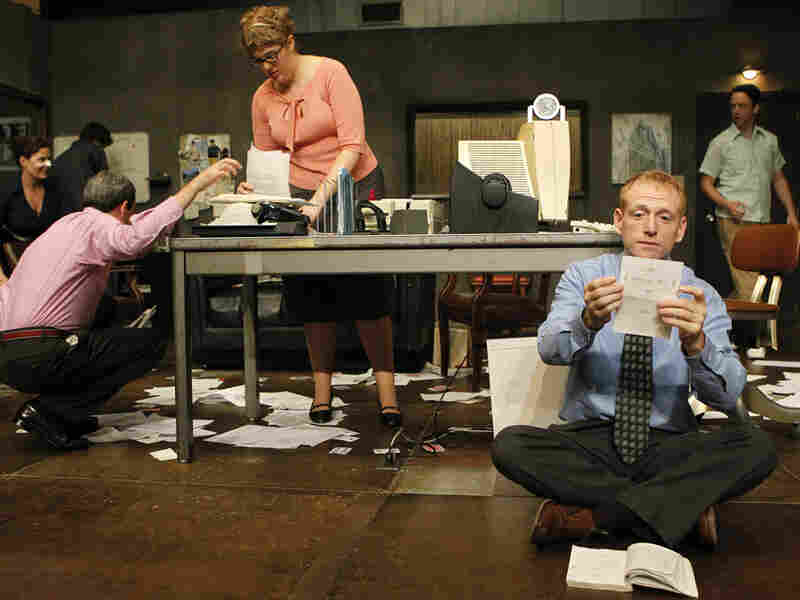 Scott Shepherd plays an office worker who gets swept away by The Great Gatsby in Gatz. Joan Marcus hide caption 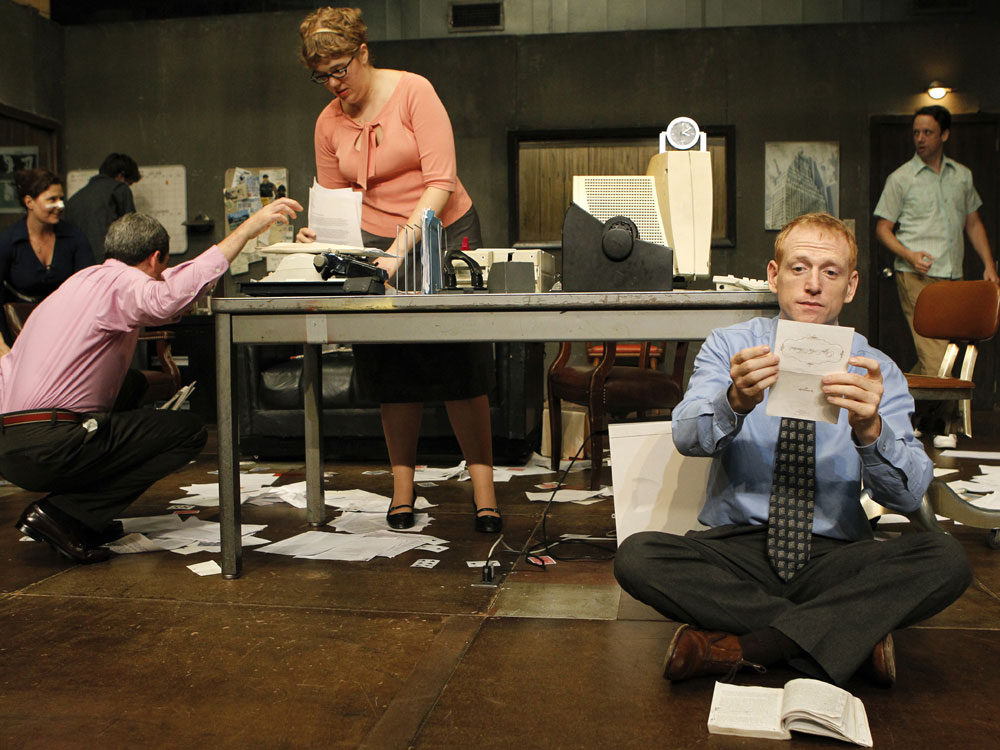 Scott Shepherd plays an office worker who gets swept away by The Great Gatsby in Gatz.

Since its publication in 1925, F. Scott's Fitzgerald’s novel The Great Gatsby has captured the American imagination.  The flamboyant story has been adapted for film, stage, television and even opera.  But one ambitious New York theater company has decided to put every word of the novel onstage in a 6 1/2-hour adaptation that's been getting rave reviews.

The Public Theater's Gatz opens with a man in a blue shirt walking out onto a set that doesn't even vaguely evoke F. Scott Fitzgerald’s jazz age.  It's the drabbest office imaginable: gray walls, beat-up furniture, a manual typewriter, an ancient computer.

The man tries several times to boot up that computer, all unsuccessful.   Then, with a shrug, he pulls out a paperback copy of The Great Gatsby, and starts reading -- aloud.

And for the next 6 1/2 hours -- plus two intermissions and a dinner break -- the audience is transported into the world of The Great Gatsby as the workers of this mysterious onstage office bring the novel to vivid life and, somehow, that guy in the blue shirt becomes Nick Carraway, Fitzgerald’s narrator, and the friend and confidant to self-made millionaire Jay Gatsby.

'In My Younger And More Vulnerable Years'

'On The Last Night'

"It doesn't sound like innately dramatic material," Brantley says. "But this is a truly dynamic work. And it somehow finds a theatrical form for the very private act of reading."

That's thanks, in large part, to director John Collins.  For the past 19 years, Collins has directed every production by Elevator Repair Service, the experimental theater group that will be performing the play through Nov. 28. He says creating theater out of the improbable is a fundamental part of their mission.

"We like things that give us some sort of problem to solve," Collins says. "That eventually became a kind of obsession with doing things that were wrong for the theater. You know, we liked material that didn't present any kind of obvious way to become a play."

So when one of their company members suggested adapting The Great Gatsby, F. Scott Fitzgerald's keen-eyed look at the American dream, they all leapt at the opportunity and began rehearsing in a dingy office in downtown New York, a lot like the one onstage.

"There was a certain resonance in a dumpy little office," Collins says of the play's setting.  "I mean, Nick, in the book, has a kind of humble job as a bond salesman and talks about how he doesn’t make much money.  It had resonance with the book, but it also was just, for me, a kind of mysterious canvas on which to project the book."

So, as the guy in the blue shirt reads the novel, office workers drift in and out, doing their tasks -- delivering memos, picking up mail -- until they subtly begin to resemble the characters in the novel.

Somewhere in the first 20 minutes, the worker who becomes Tom Buchanan blurts out a line of dialogue, and before you know it, scenes from The Great Gatsby -- like the drunken party in Myrtle Wilson's love nest -- are happening in the middle of an office, with paper and plastic cups flying all over the place. 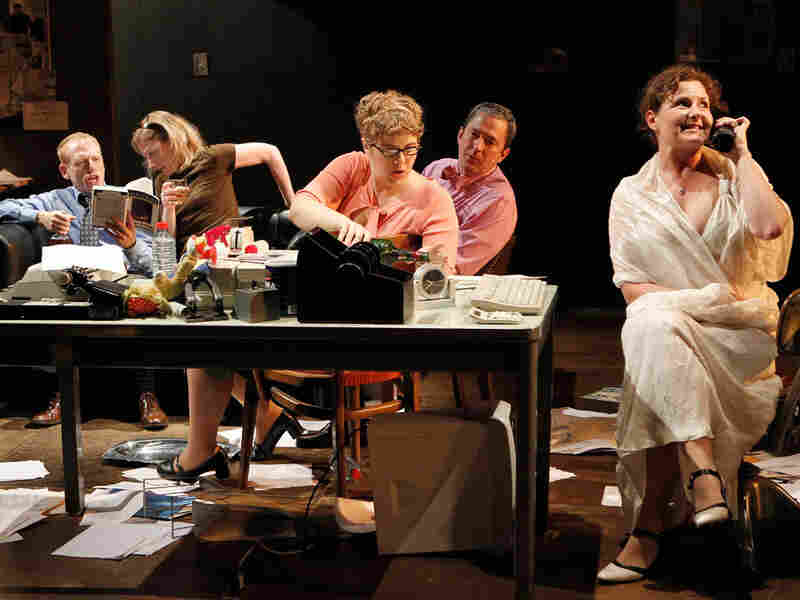 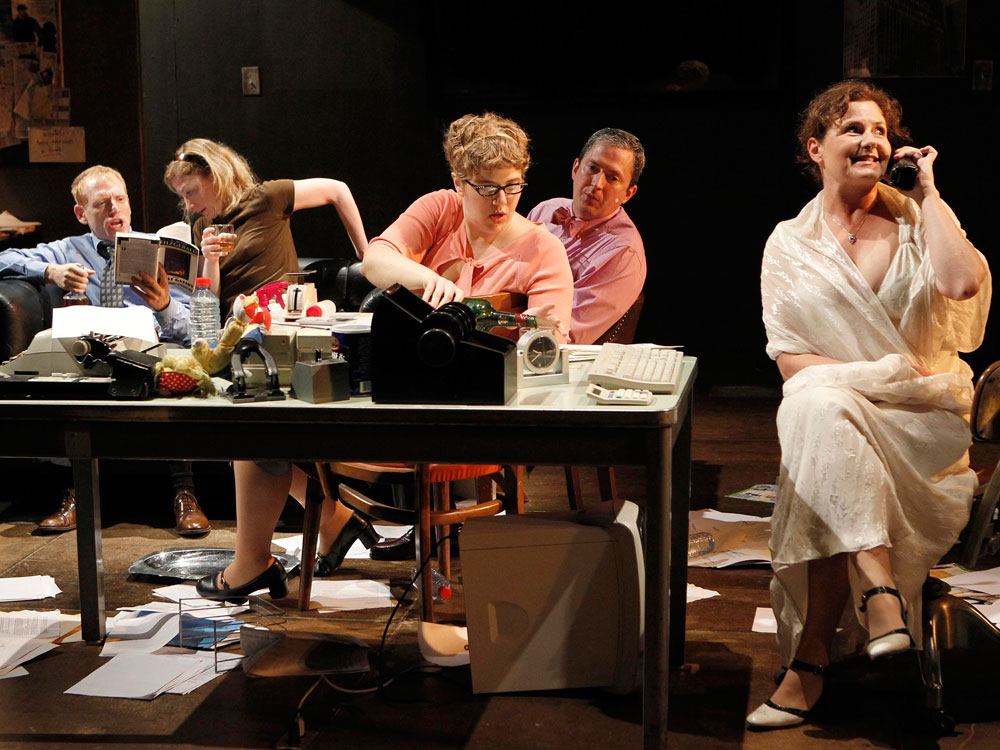 'Borne Back Ceaselessly Into The Past'

Collins, who had never read the novel before he started working on the show, says he was amazed at how well-suited the story was for the stage.

And so the decision was made, early on, to use every word.  But Scott Shepherd, the guy in the blue shirt, ends up saying most of them.

"I've never run a marathon, but maybe it's kind of a similar thing.  It's too big, too long to hold in your head at once or to even really conceive of or think about or prepare for," Shepherd says. "All I know how to do is to go out there and open the book and start."

It's a simple approach, but it works.

"Scott Shepherd is amazing," critic Ben Brantley says.  "He gives a performance that is very specific, that is taken over by the book, that's defined by the book. And at the same time he remains the universal reader, the constant reader. And I've never seen a balancing act quite like that in theater."

Shepherd starts the play as an anonymous office worker, but by the final hour, the book has been set aside and Shepherd is Nick Carraway.

And then he delivers the last lines of Fitzgerald’s American classic:

"So, we beat on," Shepherd recites, "boats against the current, borne back ceaselessly into the past."

Those words ring true -- even today.