Accessibility links
Religious Polarization Is Part Of 'American Grace' What kind of force is religion in American life today? A new book by professors Robert Putnam and David Campbell seeks to examine some of the changes. 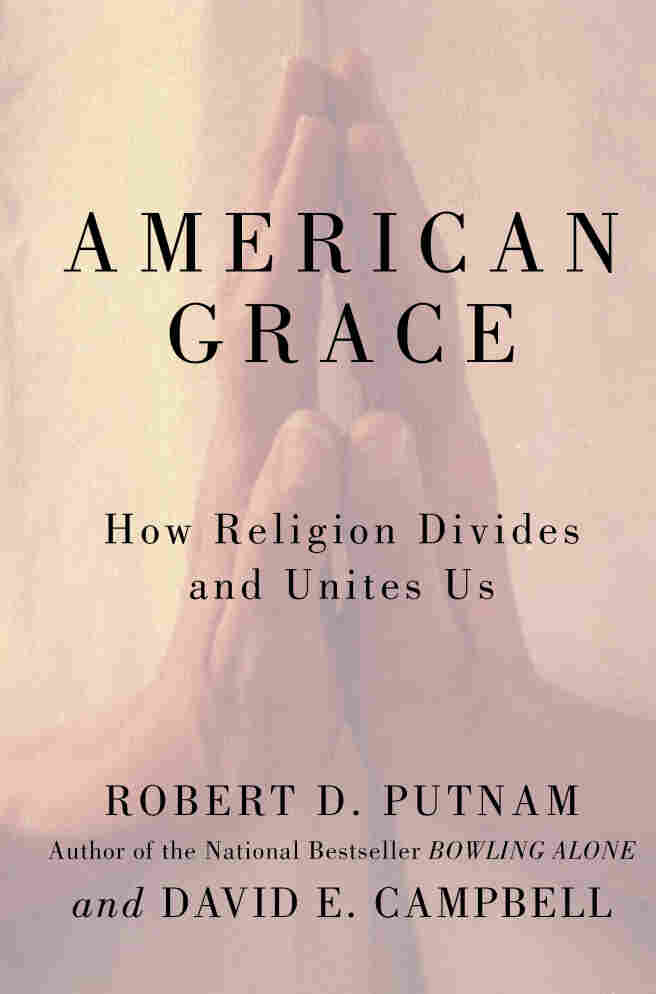 The United States is a nation that was both founded by religious people and built around a guarantee of liberty from state-imposed religion. The religious landscape has changed substantially over the past three centuries, with the addition of faiths in America that range from Islam and Judaism to the Church of Jesus Christ of Latter-day Saints; today's landscape of worship includes megachurches with huge congregations, storefront tabernacles, spiritual advisers.

And mostly, Americans accept that diversity with remarkable tolerance. What kind of force is religion in American life today?

A new book by professors Robert Putnam and David Campbell seeks to examine some of the changes. It's called American Grace: How Religion Divides and Unites Us.

One of the biggest changes over the past 20 years has been that more and more Americans, when polled, cite no religious affiliation at all. That group, which Putnam and Campbell call the "the nones," "has been skyrocketing actually in the last 15, 20 years," Putnam says.

"So it's now, roughly speaking, 35 percent [to] 40 percent of younger Americans … who say that they have no religious affiliation."

That's a big change. For many years, the researchers say, only about 5 to 7 percent of Americans felt they belonged to no religion. The shift, Putnam says, is "a quite novel and interesting, significant development."

As for the Americans who do belong to religious groups, tolerance is flourishing among them, too.

One huge factor in that increased tolerance? More marriages across once-rigid religious lines.

"By now more than half of all Americans are married to someone in a different religious or faith tradition," Putnam says. "Our friendships increasingly cross religious boundaries." And as Putnam says, "it's hard to demonize people of a certain religion when you have someone like that in your own family.

"We call that the 'Aunt Susan effect,' " he says. "Almost every American has an 'Aunt Susan' because of intermarriage and so on."

No matter what religion this putative Aunt Susan follows, knowing and loving her makes it hard to judge her.

"You know that your faith says ... she's not going to go to heaven, but I mean, come on," Putnam says. "[It's] Aunt Susan, you know, and if anybody's going to heaven it's Aunt Susan. So every American is sort of caught in this dilemma, that their theology tells them one thing, but their personal life experience tells them to be more tolerant."

The God Gap In Voting

Another shift in the American religious spectrum is how religion correlates to political beliefs. Or, more precisely, your degree of religiosity.

"How frequently you attend church, or interestingly, how frequently you say Grace ... measures like that, how religious you are, have a pretty strong correlation with how you vote and which party you prefer," Campbell says.

Not too long ago, such a link between religiosity and political belief was almost unheard of. 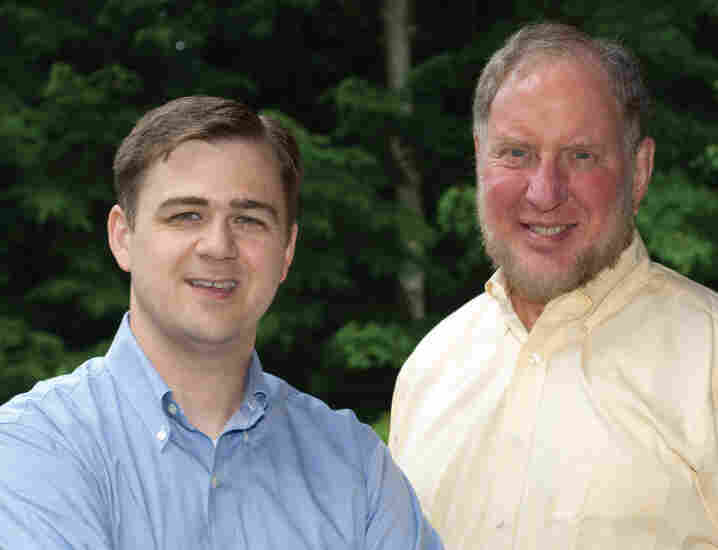 Unsurprisingly, American Grace points to a current correlation of more religious people with the Republican Party, though Putnam points out that African-Americans are an important exception to the rule. They are the most religious group in America, but are more connected to the Democratic Party.

"We've reached a point where there really is a pretty stark political divide on the basis of, not so much the particular denomination you attend, but rather the intensity of your religious commitment," Campbell says.

What about the groups that are both deeply religious and more connected to the Democratic Party? People often end up adjusting their religion to meet their political ideas, or vice versa.

One big reason for that growth among the nones is precisely such an adjustment.

"There's been a kind of a quiet backlash among young people against this politicization of religion," says Putnam. And as a result, young liberal-minded people have often ended up avoiding religion because they associate it with conservative Republicanism.

And yet the title includes the notion of American unity, which the authors say is a big focus of the book.

"The 'American Grace' of our title is meant to refer to the unity that we find along religious lines," Campbell says. "We find people actually coming together [from] different faiths and different religions."

The America of today, Campbell says, has "managed to accomplish something that is historically and internationally unique -- that we're a religiously devout country, a religiously diverse country and a pretty religiously tolerant country."

Religious Polarization and Pluralism in America

In the 1950s, the Fraternal order of Eagles teamed up with movie director Cecil B. DeMille for a unique promotion of the epic movie The Ten Commandments. In a form of reverse prod­uct placement, the Eagles and DeMille donated monuments of the biblical Ten Commandments to communities all around the coun­try. Rather than putting a product in the movie, the primary symbol of the movie was instead placed in prominent locations -- in pub­lic parks, in front of courthouses, and in the case of Texas on the grounds of the state capitol. These monuments reflected the zeit­geist, as the 1950s brought public, even government-sanctioned, expression of religion to the fore in many ways. This was also the decade in which "In God we Trust" was added to American currency, and the Pledge of Allegiance was amended to include the words "under God."

Those monuments stood for decades without causing a fuss. In recent years, however, they have led to court battles over whether their location on publicly owned land violates the constitutional prohibition on a government establishment of religion. In other words, fifty years ago these displays were so noncontroversial that they could safely be used as a marketing ploy for a big-budget Hol­lywood movie. Now they are the subject of litigation all the way to the Supreme Court.

In 1960, presidential candidate John F. Kennedy had to reassure Protestants that they could safely vote for a Catholic. (At the time 30 percent of Americans freely told pollsters that they would not vote for a Catholic as president.) At the same time, Kennedy won overwhelming support from his fellow Catholics, even though he explicitly disagreed with his church on a number of public issues. In 2004, America had another Catholic presidential candidate -- also a Democratic senator from Massachusetts, also a highly decorated veteran, and also with the initials JFK. Like Kennedy, John (Forbes) Kerry also publicly disagreed with his church on at least one promi­nent issue -- in this case, abortion. But unlike Kennedy, Kerry split the Catholic vote with his Republican opponent, and lost handily among Catholics who frequently attend church. Kennedy would likely have found it inexplicable that Kerry not only lost to a Protestant, but in George W. Bush, an evangelical Protestant at that. Writing about the religious tensions manifested in the 1960 campaign, political sci­entist Philip Converse described the election as a "flash of lightning which illuminated, but only momentarily, a darkened landscape." Kerry's candidacy was another flash of lightning, but the landscape it revealed had changed significantly. In 1960, religion's role in politics was mostly a matter of something akin to tribal loyalty -- Catholics and Protestants each supported their own. In order to win, Kennedy had to shatter the stained glass ceiling that had kept Catholics out of national elective office in a Protestant-majority nation. By the 2000s, how religious a person is had become more important as a politi­cal dividing line than which denomination he or she belonged to. Church-attending evangelicals and Catholics (and other religious groups too) have found common political cause. Voters who are not religious have also found common cause with one another, but on the opposite end of the political spectrum.

Again, something has changed.

This book is about what has changed in American religion over the past half century. Perhaps the most noticeable shift is how Americans have become polarized along religious lines. Ameri­cans are increasingly concentrated at opposite ends of the religious spectrum -- the highly religious at one pole, and the avowedly secular at the other. The moderate religious middle is shrinking. Contrast today's religious landscape with America in the decades following the Second World War, when moderate -- or mainline -- religion was booming. In the past, there were religious tensions, but they were largely between religions (Catholic vs. Protestant most nota­bly), rather than between the religious and irreligious. Today, Amer­ica remains, on average, a highly religious nation, but that average obscures a growing secular swath of the population.

The nation's religious polarization has not been an inexorable process of smoothly unfolding change. Rather, it has resulted from three seismic societal shocks, the first of which was the sexually lib­ertine 1960s. This tumultuous period then produced a prudish after­shock of growth in conservative religion, especially evangelicalism, and an even more pronounced cultural presence for American evan­gelicals, most noticeably in the political arena. As theological and political conservatism began to converge, religiously inflected issues emerged on the national political agenda, and "religion" became increasingly associated with the Republican Party. The first after­shock was followed by an opposite reaction, a second aftershock, which is still reverberating. A growing number of Americans, espe­cially young people, have come to disavow religion. For many, their aversion to religion is rooted in unease with the association between religion and conservative politics. If religion equals Republican, then they have decided that religion is not for them.

Religious polarization has consequences beyond the religious realm, because being at one pole or the other correlates strongly with one's worldview, especially attitudes relating to such intimate matters as sex and the family. Given that American politics often centers on sex and family issues, this religious polarization has been especially visible in partisan politics. A "coalition of the religious" tends to vote one way, while Americans who are not religious vote another.

The current state of religious polarization has led social com­mentators to use heated, even hyperbolic, language to describe the state of American society. The bestseller lists are full of books highly critical of religion, countered by pundits whose rhetoric decries a public square made "naked" by religion's absence. In an overused metaphor, America is supposedly in the midst of a war over our culture.

And yet, when one ignores these venomous exchanges, and looks instead at how Americans of different religious backgrounds interact, the United States hardly seems like a house divided against itself. America peacefully combines a high degree of religious devo­tion with tremendous religious diversity -- including growing ranks of the nonreligious. Americans have a high degree of tolerance for those of (most) other religions, including those without any religion in their lives.

Religion's role in America thus poses a puzzle. How can religious pluralism coexist with religious polarization? 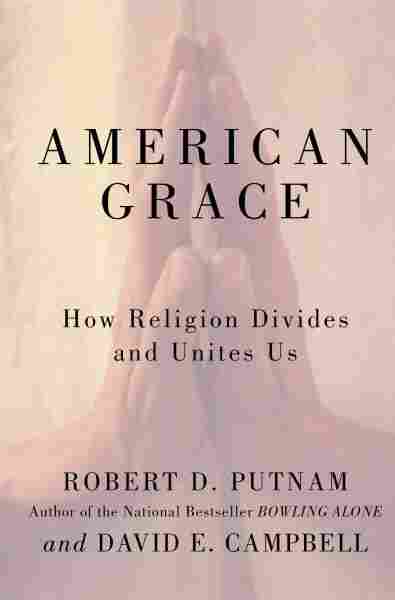 How Religion Divides and Unites Us