Accessibility links
Congress Weighs Homeowner Refinancing Plan With mortgage rates at historic lows, lawmakers are weighing a proposal that could enable 37 million homeowners to refinance their mortgages at little or no cost to taxpayers. But some economists worry that refinancing all these people would ultimately hurt banks and other investors. 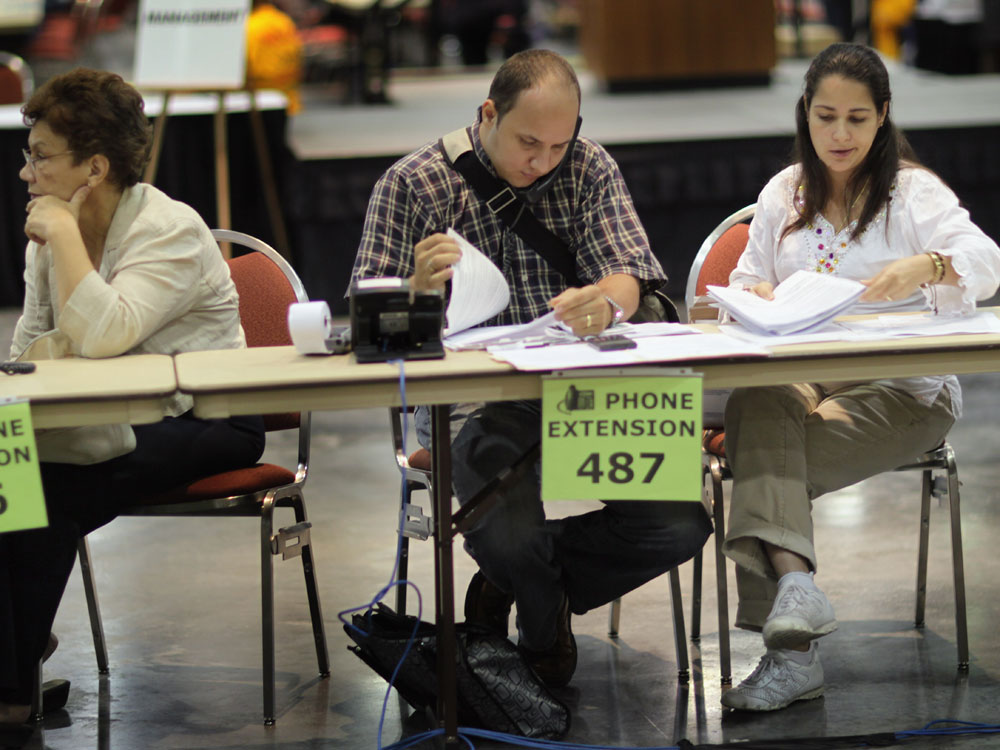 Vincenzo Modugno and Jennifer Mota (right) try to restructure a mortgage loan during a Neighborhood Assistance Corporation of America's "Save the Dream" tour stop in Palm Beach, Fla.

Lawmakers say they can refinance tens of millions of homeowners, saving each of them thousands of dollars a year.  And the most attractive part of the plan is that it would come at little or no cost to taxpayers, supporters say.

Mortgage rates matched a record low this past week -- averaging 4.32 percent for a 30-year fixed-rate loan.  So if homeowners can refinance these days, they can often save hundreds of dollars a month.

The problem is millions of people can't qualify to refinance.  Many are underwater, meaning they owe more than their house is worth, or they have bad credit or have lost some income. So the new proposal is designed to help these people take advantage of the low rates.

Rep. Dennis Cardoza, a California Democrat, introduced the bill this past week.

"This is a market-based solution," he says. The vast majority of home loans are already guaranteed by the federal government in one way or another -- many through the mortgage giants Fannie Mae and Freddie Mac, he says.

How It Would Work

The proposal by Rep. Dennis Cardoza (D-CA) would allow all qualifying mortgages currently owned or guaranteed by Fannie Mae and Freddie Mac to refinance at current rates, which are historically low.

Proponents say this would enable homeowners to reduce their monthly mortgage payment by hundreds of dollars and would also reduce the number of defaults and foreclosures.

Funding for the program would come from Fannie and Freddie issuing new mortgage-backed securities.

"The federal government is already on the hook for everyone who defaults on these mortgages -- 37 million American mortgages," Cardoza says.

Cardoza says a massive refinancing at today's market rates would make these loans more affordable for people. That would put money in their pockets to go out and spend and stimulate the economy.  And he says all these people need is for the government to say it will guarantee the more affordable loans.

Basically, the government would be swapping out its guarantee from a more expensive loan and applying it to one with lower payments that's less likely to default and go into foreclosure.

"It would allow people to use the market to refinance so they get lower interest rates on current home mortgages," Cardoza says.

Skepticism Toward The Idea

But some economists aren't so crazy about the idea.

"The government should back away because everything they've tried, with good intent, has not worked," says Anthony Sanders, the director of the Center for Real Estate Entrepreneurship at the George Mason University School of Management.

Sanders doubts that the program wouldn't cost any money, and he worries about unintended consequences. Such a massive refinancing could hurt banks or other investors such as pension funds because they would no longer be getting those higher interest-rate payments, he says.

And Sanders says the government has done too much already to try to prop up the housing market.

"Why are we absolutely dead-set on keeping housing prices artificially high?"  Sanders says, adding that it's unfair for people trying to buy homes.

A Way Out For Homeowners In Trouble Hits A Snag

The Potential For Bipartisan Support

Cardoza didn't dream up this plan himself, and it's not just something that appeals to Democrats. The proposal actually comes from a pair of economists at Columbia University, including R. Glenn Hubbard, the former head of President George W. Bush's economic team.

"I don't even view this as an intervention the way we've done before," Hubbard says.

He says the government would not be taking on any more risk or bailing people out with a subsidy.  And Hubbard says there could be solid bipartisan support for the plan since it could assist 37 million homeowners.

Bipartisan cooperation before the midterm elections is probably unlikely. But Hubbard says the proposal could get some traction afterward.