Accessibility links
Lula's Legacy Looms As Brazil's Voters Weigh Choice While Brazil's thriving economy is helping it become a global power, people in the northeastern countryside are still focusing on the basics. President Luiz Inacio Lula da Silva's has done much for the region, and his protégé, Dilma Rousseff, is favored to win Sunday's vote. 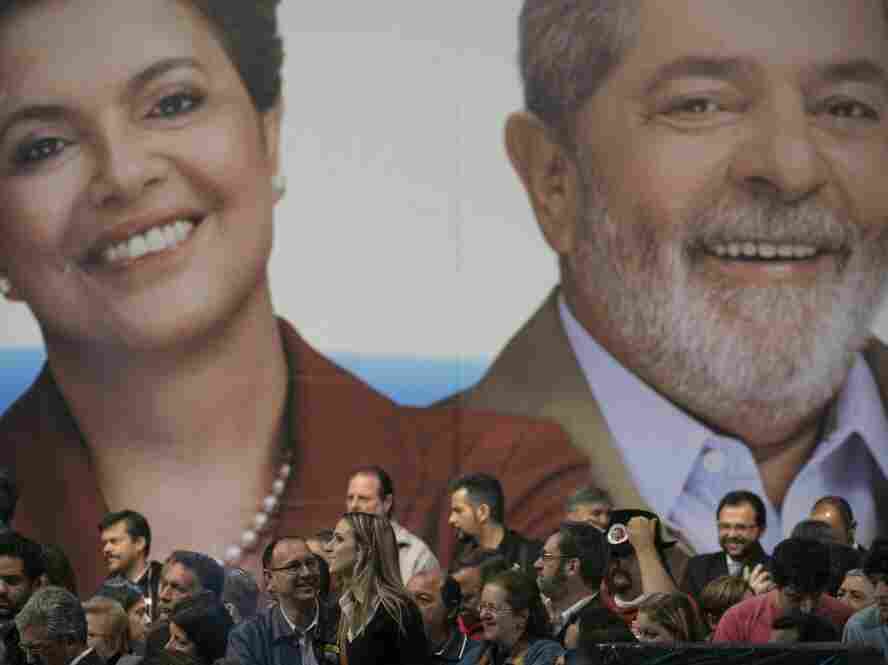 Brazil is electing a new president Sunday and while its thriving economy is helping it become a global power, people in Brazil's northeastern countryside are still focusing on the basics like local food and agriculture.

President Luiz Inacio Lula da Silva's has done much for the region, where people are looking for a candidate to continue his legacy.

Brejo da Madre de Deus, Brejo, is a town of tile and cement homes perched on a scrubby hill. It's part of Brazil's poor, underdeveloped northeast, and just a few years ago, schoolchildren here, like Mikaely Silva, were used to eating one thing: rice and beans.

That was it: rice and beans, almost every day. Because many kids came from families who couldn't afford much more, vegetables, fruit, dairy and meat were practically absent from their diets.

Today these middle schoolers are leaning over bowls of homemade soup, full of carrot, onion, cabbage, squash and beef, much of it local.

Just a decade ago, 17 million Brazilians were undernourished. Today that number has been cut by a third, thanks largely to Lula's policies, and small farmers such as Cicero Gomes.

As of this year, all school lunch programs are required to buy 30 percent of their products from local producers, which means Gomes has been busy on his farm.

There are long rows of vegetables. Banana trees flank the field, some passion fruit vines and a patch of yucca off to one side. All of it is organic, and thanks to the government program, all of it headed to market.

Gomes says that his life has changed a lot, and the numbers are striking: He now earns around $500 a month. Just a few years ago, the average monthly wage for a farmer was less than $100.

Jose Joelson is the head of the small-farmer's union. He says selling to schools has made life much more stable.

"When you have a contract for 6-8 months, a farmer knows for sure, and for how much he's going to sell his product," Joelson says. "It's set. He's not planting only to find out he can't sell the produce."

This is the other side of Brazil, away from the modern, bustling cities; people looking for stability in the countryside. About a fifth of Brazilians live in rural areas and in terms of development, the countryside remains far behind the city.

"At some point someone said Brazil is Bel-India, a mix of a small and rich Belgium, a developed country, in the middle of a big, poor India," says economist Marcelo Neri. "So the two sides -- this contradiction."

This means many Brazilians, particularly those in places like Brejo, where development is still slow to trickle down, aren't thinking about foreign investment when they go to the polls, or even about buying a second car, but who will help them get the basics.

Joelson says people who live in rural areas should have access to Internet, phone service, sanitation and health. He will be voting for Lula's protégé, Dilma Rousseff, who he thinks is most likely to help out people in forgotten rural areas, like Brejo.

'From The First World'

Everyone in town knows Maria de Socorro as "Aunt Coca." She runs a restaurant out of her house that fills up each day at noon. Customers get grilled steak, fresh cheese, big bowls of tomato salad, black-eyed peas and steamed pumpkin, and a pitcher of bright-pink guava juice. It's all homemade, cheap, organic, local and delicious.

Aunt Coca thinks the new school lunch program is a big step for the whole community.

"{It's] outstanding. There are things we'd never seen before," she says. "In the school lunch program, we have strawberries, we have honey, all kinds of vegetables, and top-quality meat.

"This is something from the first world."

Like nearly everyone in town, she says she will be voting for Dilma Rousseff in the hopes that Rousseff will help this local food movement, and Brazil's rural northeast, keep developing.