Accessibility links
Chinese Investment In Greece Spurs Mixed Reaction The Greek government has been in talks for years with Chinese shipping giant Cosco, among others, to run a giant container port in Crete. While some say the port would revive an economically dying area, others say it will end a way of life. 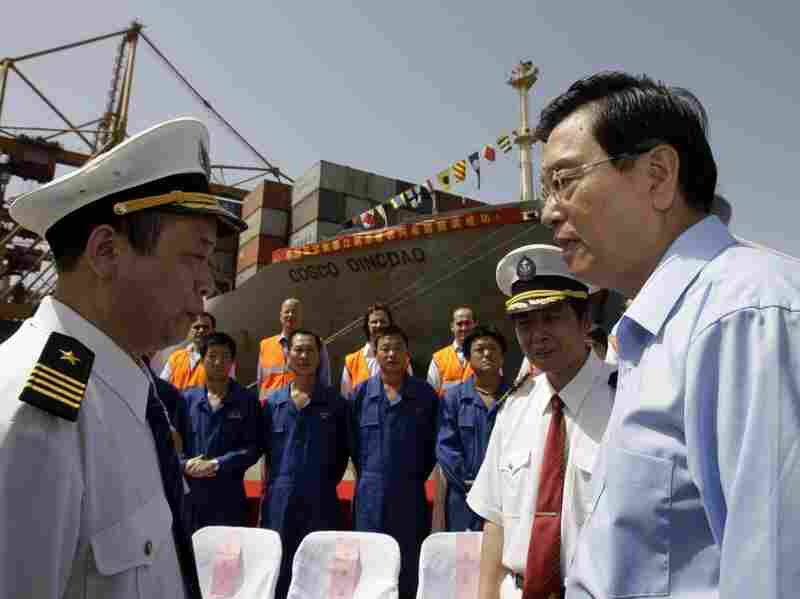 Chinese Vice-Premier Zhang Dejiang (right) talks to Cosco employees at the port of Piraeus near Athens in June. The Chinese company runs a major container port in Piraeus, but the prospect of more Chinese investment in the country is splitting Greeks. Petros Giannakouris/AP hide caption

Chinese Premier Wen Jiabao is on a visit through Europe this week to talk economics. Greece is especially interested in what he has to say as it is $400 billion in debt and is heavily wooing Chinese business.

Many Greeks are welcoming the Chinese with open arms, but others worry that some of China's plans could come at a high cost.

Workers on a small fishing boat are removing the day's sardine catch from a bright yellow fishing net. They are docked off Kokkinos Pirgos, a sleepy village on the southern coast of Crete. The area around here is known for its tomatoes, sea turtles and low-key tourist scene.

The Greek government has been in talks for years with Chinese shipping giant Cosco, among others, to run a giant container port here, but the plan has divided the community. Some welcome China and say the port would revive an economically dying area, but others say it will end a way of life.

In June, Cosco assumed full control of the major container port in Piraeus, just southwest of the Greek capital.

Greek ship owner Nicos Vernicos works with Cosco and is a big fan of the Chinese. His 15 tugboats have been subcontracted by Cosco in Piraeus. He says Cosco is modernizing a long-inefficient port.

"Before Cosco came, the operation of the Piraeus port was done by a government-controlled company, and the mentality of all those working in this company was of public servants," Vernicos said. "They didn't have any business mind, and there was not competition."

Greece desperately needs to become more competitive. The World Economic Forum ranks it in the bottom half of its competitiveness index. The country's red tape and corruption have scared away investors for years -- but not the Chinese.

Cosco is working with Greece's state ports to run a major distribution hub west of Athens. Deals are also in the works for shipbuilding, rail projects and luxury hotels.

Labor unions have accused Greece's Socialist government of selling out a weakened Greece to the Chinese. But Haris Pamboukis, Greece's minister of investments, says that's nonsense.

"We are not selling the country, we are empowering the country because we are speaking here about the investments which are productive and will be in Greece," he said.

Greece is in the middle of a deep recession that has been worsened by spending cuts and tax increases. Economists say Chinese investment will mean jobs, which Greece badly needs.

The proposed Chinese container port in Crete, for instance, could create at least 800 jobs. But those who live in the area say the port would kill a few thousand jobs in tourism.

The port would also destroy a part of Crete that has retained its traditional way of life, says Priscilla Petinarakis, the American wife of fisherman Demosthenis Petinarakis, who has lived here for three decades.

"Well, it's just a beautiful stroll along there. It's just full there in the summertime," she said. "There are beach parties, there are all these things that help people be together, and if you have a cesspool of a harbor there, then I can't really see that that's going to happen anymore."

Her husband and others have formed a citizens' group against the port, but not everyone supports them.

At a cafeteria near the beach, a group of men, including retired sailor Yiannis Christakis, say they want the Chinese here.

"We need harbor here; [it will] give us more life," he said.

At a table nearby, Petinarakis listens to Christakis and frowns.

"I have nothing with Chinese people, I think they are very nice and all that. But we better take it easy and see what is good for us," he said.

If the port is built, Petinarakis says he knows there is no going back, and as Greece changes after the economic crisis, he hopes the sacrifices will be worth the rewards.