Accessibility links
Burning Death Some people swore that the house was haunted.   Others knew that she was harmless... mostly.  She was old, yet naive.  That sometimes happens when you grow up in the city of Genoa. 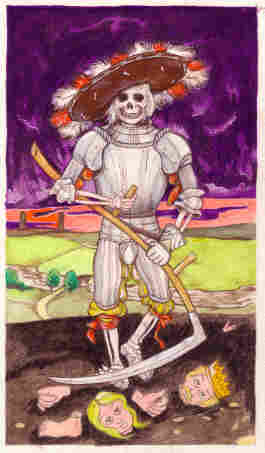 Some people swore that the house was haunted.

Others knew that she was harmless... mostly.  She was old, yet naive.  That sometimes happens when you grow up in the city of Genoa.  Sometimes you remember being a pauper, sometimes you recall the dinner table being surrounded by counts.  It becomes harder and harder to keep up with yourself decades later.

I thought nothing of it.  It was normal.  At least it was to me.  So was forgetting my lunch every day before going to school and running through the halls when I was called to the office.  She was old.  She could die at any minute.  How was I to be sure that this time it wasn't just her bringing me my forgotten lunch?

One day I returned home from school to find her sobbing at the kitchen table.  I rushed to her thinking the worst.  She looked so frail.  She wasn't wearing her wig and she hadn't combed out what was left of her hair that day.  Her eyebrows were blue -- she mistook the eyeliner for an eyebrow pencil again.  Her cheeks were red, but I couldn't tell if that was from crying or from rouge.  She always liked a lot of rouge.  Thank goodness her teeth were in.  It was easier to understand her when she wore them.  And it was a relief I wouldn't have to search the house for them today.

I checked to see that both of her hearing aids were in as I tried to comfort her.  If she got into trying to read my lips, we were going to be there all afternoon.  Finally, I was able to calm her down enough for her to tell me "I'mma cursa".  Then the wailing sobs began again.  I went to the counter and poured her a cup of coffee, then set it in front of her.  I assured her it was "blacka."  Cream and sugar had too many calories.  She took in a few sips, her chin quivering as she swallowed.  She told me she had been smoking a cigarette and reading her own tarot cards.  She agreed it was a bad idea.  She knew it was against the rules. But she was alone.  Everyone was off to school or work.  What else was she going to do?  The Jehovah's Witnesses only stopped by on Wednesdays, so she got antsy.  Each time she shuffled and laid out the cards, after "Who lova you, who desirah you, who keepa happy, and what happy to you," the Death card appeared.  Certain that was a bad sign, she  endeavored to burn the card once and for all.  She got a metal pot ready for the inferno.  She went to the outside patio off the kitchen to proceed.  Scapula around her neck, rosaries in her pocket, she ignited a match to burn Death.

But Death had another idea.

She tried many matches and two different lighters.  Death would not burn.

I asked to see Death.  She took me to the patio.  Sure enough, there was the pot, discarded matches, and two lighters.  I picked up Death and tried to explain to her the properties of laminated plastic and fire.  Seeing that she was trying to read my lips, I realized we needed to call the priest.  Without the big guns, I wasn't going to get anywhere.

Just then, my mother returned home from work.  Miraculously hearing the lock on the front door click, the old woman turned around and ran through the kitchen to her daughter.  She proclaimed, "Jaquelee, I'mma cursa!"

Nothing was ever the same again after that.