Accessibility links
Keep A Good House Some people swore that the house was haunted. Lavinia. La-vi-ni-a; her name rolled off our tongues like liquor. There, in the century-old cemetery, tucked among generations of islanders and fishermen, my sister and I found her simple headstone. 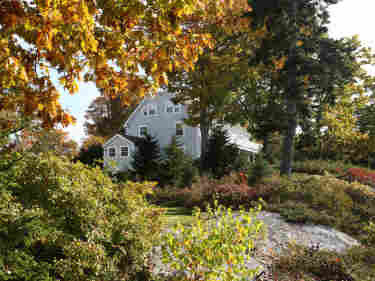 Some people swore that the house was haunted. Lavinia. La-vi-ni-a; her name rolled off our tongues like liquor. There, in the century-old cemetery, tucked among generations of islanders and fishermen, my sister and I found her simple headstone. Surrounded by wild buttercups and covered with velvety sea-foam lichen, her name was just barely discernable: Lavinia A. Smith 1810-1880,  alongside her baby Mary's tiny grave,  April 1830-December 1831. To the right, her husband, Captain Austin E. Smith, 1803-1871.

Kneeling in the grass beside the rough granite stone, we knew her.  A strong woman -- a grieving mother whose infant daughter had died in her home. The wife of a whaling captain, she understood loneliness and worry and waiting. She was house-proud too. Her beautiful shingled Cape had spacious rooms and a master bedroom whose large-paned windows faced south to the ocean. Lying in her bed at night, she listened to the waves crash against the cliffs and the sea that carried  her husband through the shoals of No Man's Land and the Elizabeth Islands.

At dawn, Lavinia rose, her breath unfurling in the chill air. She stoked the fire first, then nursed her fussy baby back to sleep. Tip-toeing across the pine floor to her dresser, she brushed her long dark hair, took three hairpins from the black tin box, a gift from her husband, and coiled her braid into a bun.

Our grandmother was an unhappy mother; a remote woman who rarely found joy in nurturing her children. But she loved her summer home and tended to it with a keen eye for beauty and simple elegance.  When not lost in far-off sadness, she allowed us to concoct original recipes in her orderly kitchen, or taught us how to snip herbs in a delicate teacup. We knew her bedroom was off-limits; but the sunny room that once held a view of the ocean, now obscured by scrub oak, pine, red maple and choke cherry, was somehow irresistible. Although we never explored it together, it is certain that each, in our own private moments, made our way quietly around her bedroom, trying to know her, tracing our initials in the orange-red  brick dust that forever sifted down the chimney onto the hearth of the unused fireplace, then to the black tin box on the dresser that held a few ribbons and hairpins, the closet with its carefully labeled shelves of sheets and towels and faded post-card tacked to the door reading, "Ne Touch Pas", and finally, to the small desk with the yellowed envelope tucked in one of its pigeon holes.  It was small, about 2 by 4, and accompanied by one of her husbands' -- Austin's -- name penciled on the back by some unknown family member; two sepia photographs that told the story.

Standing in the sunlit bedroom, her presence owned the space. She liked the sounds of our young children laughing and exploring the summer house's secrets. But she wanted things kept orderly. We thanked her aloud and promised to leave things as she wanted them. The smell of mothballs, salty air and history, enveloped us.

On our last night in the house, the children woke first, instinctively finding their way through the darkened hallway to our beds. Awake now, we dared not speak, but each knew what we heard was true.  Doors opening and closing, furniture re-arranged -- ever so slightly. Something dropped. Lavinia, longing for her daughter, teaching two young mothers to keep a good house. Our grandmother, setting things right, trying to make up for lost chances. And nothing was ever the same again after that.