Accessibility links
National Review: Watching An Inexperienced Justice In an important upcoming term, the Supreme Court will look at issues of immigration, religion, prison overcrowding, global warming, and state secrets. Jonathan H. Adler of the National Review says that Elena Kagan, the newest justice, will be watched more closely than the others because of her lack of judicial experience. 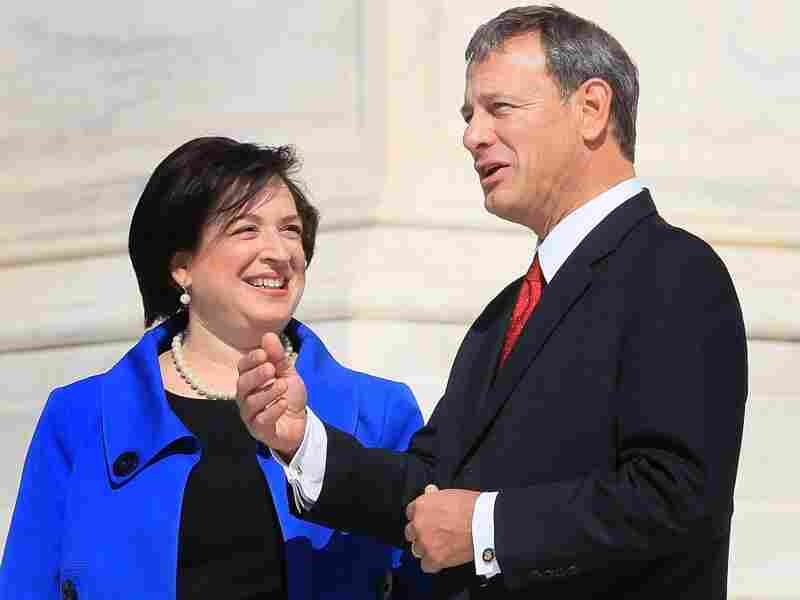 Jonathan H. Adler is a professor of law at the Case Western Reserve University School of Law and a contributing editor to the National Review.

For the second year in a row, the Supreme Court’s term opens with a new female justice: After brief service as solicitor general, former Harvard Law School dean Elena Kagan was nominated and confirmed to replace longstanding liberal justice John Paul Stevens. Most anticipate that Justice Kagan will replicate Stevens’s liberal orientation, but little else is known about how she will perform as a justice. In contrast to Justice Sotomayor, who joined the court with substantial trial- and appellate-court experience, Justice Kagan has never been a judge, nor does she have much litigation experience. Indeed, she is the only member of the Court without prior judicial experience.

Given the next term’s docket, Justice Kagan may have the chance to cut her teeth without showing her hand on many ideologically charged issues. The 2010–11 Supreme Court term lacks many high-profile cases, unlike the past term, which covered such headline-grabbing subject matter as gun rights, separation of powers, “crush” films, and campaign finance. The larger legal controversies of the day, including gay marriage, “don’t ask, don’t tell,” Arizona’s anti-immigration law, and health-care reform’s individual mandate, have yet to reach the high court.

But that hardly makes this term unimportant. The docket is no more than two-thirds full and already contains plenty of important cases, particularly for the business community. And for Court watchers, the prevalence of less politically salient legal issues could make it a better measure of the Court’s most junior justice — at least in those cases in which she is able to participate: Because of her work in the solicitor general’s office, Justice Kagan has recused herself in 25 cases, nearly half of the Court’s cases docketed to date.

Arizona’s much-debated SB 1070 is not yet before the Court, but another Arizona immigration measure is. In Chamber of Commerce v. Whiting, the Court will consider whether federal law preempts a state law designed to prevent private businesses from employing illegal immigrants. Arizona’s law requires employers to use a purportedly voluntary federal electronic database to verify the work-authorization status of potential workers and imposes stiff sanctions on companies that hire illegals. The business community and civil-liberties groups say federal law preempts such measures, and they have been joined by the Obama administration, even though the law was signed by then-governor, now–secretary of homeland security (and one-time Supreme Court short-lister) Janet Napolitano. As in so many other cases this term, Justice Kagan is recused.

The Arizona case is but one of several preemption cases before the Court. In Williamson v. Mazda Motors of America, the justices will consider whether federal motor-vehicle-safety standards preempt tort suits alleging carmakers were negligent for failing to adopt additional safety measures, in this case a combination lap/shoulder belt in the rear-aisle seat of a minivan. In Bruesewitz v. Wyeth, the question is whether the National Childhood Vaccine Injury Act preempts tort suits alleging that a vaccine’s design created an unnecessarily high risk to recipients. In AT&T Mobility v. Concepcion, the Court will consider whether the Federal Arbitration Act preempts states from barring class-arbitration waivers in arbitration agreements. These cases, along with others relating to employment law, securities, and class-action litigation, make this a potentially significant term for American business.

Two First Amendment cases are sure to garner significant public attention. In Schwarzenegger v. EMA, the Court will evaluate a California law prohibiting the sale of violent video games to minors. The crucial questions are whether depictions of extreme violence, like obscenity, are subject to a lesser degree of constitutional question, and the extent to which governments may adopt targeted measures to limit the availability of such materials to children. In Snyder v. Phelps, the Court will review the constitutionality of a tort judgment against a fringe religious group for staging a protest at the funeral of a fallen Marine. The Marine’s family successfully sued the protestors for intentional infliction of emotional distress and invasion of privacy, among other things, but the judgment was overturned on the grounds that the protest was protected by the First Amendment. The protest was not targeted at this Marine but at broader policy questions, such as the nation’s alleged permissiveness of homosexuality, but it is not clear which way this fact cuts. The protesters may be focused on larger matters of public concern, but the fallen Marine is not a “public figure,” nor would everyone consider a private funeral an expressive public event.

The biggest religion-related case on the docket thus far, Arizona Christian School Tuition Organization v. Winn, involves a constitutional challenge to an Arizona program offering tax credits for contributions to private scholarship funds, including those devoted to religious schools. The program is almost certainly constitutional under the Supreme Court’s decision upholding school vouchers in Cleveland, Ohio, but the U.S. Court of Appeals for the Ninth Circuit somehow did not see it that way. A reversal on the merits would be almost certain, but only if the justices get that far. A threshold question is whether the plaintiffs had standing to challenge the tax-credit program in the first place. The Court is generally skeptical of suits in which taxpayers sue to challenge the allegedly unconstitutional expenditure of government funds, except when it comes to establishment clause claims. The idea is that such arguments should be presented to the political branches, rather than the courts. In this case, there is an extra wrinkle, because the plaintiffs are not challenging direct government expenditures but tax credits, a fact that could further raise the standing bar.

The Court will also consider both substantive and jurisdictional issues in Schwarzenegger v. Plata, in which California is challenging a federal court order to release prison inmates to remedy allegedly unconstitutional prison conditions caused by prison overcrowding. The lower court concluded that prisoner release was necessary to prevent continued violations of inmates’ constitutional rights. California challenges this conclusion and further argues that the prisoner release failed to satisfy the requirements of the Prison Litigation Reform Act, which only allows such judicial remedies as a “last resort.” The prisoners, for their part, argue the Supreme Court lacks jurisdiction to hear the case, as any appeal of the release order must first be heard by the U.S. Court of Appeals for the Ninth Circuit. Should the Court reach the substantive question, it will clarify the authority of federal judges to order prisoner release and other measures to address overcrowding and other prison-management concerns. Whatever the current problems of state-prison management, there is reason to wonder whether the proper remedy is to turn such management decisions over to federal judges.

Some cases before the Court will tee up larger issues the justices will have to confront down the road. For instance, in General Dynamics v. United Statesand Boeing v. United States, the Court will consider the “state secrets” doctrine, but not in the context of the “War on Terror.” Here the two defense contractors claim the government is unfairly using the doctrine to prevent them from defending themselves against the federal government’s breach-of-contract claims. According to the companies, they could not fulfill the terms of their contracts due to the military’s refusal to share relevant technological information with them. A more direct challenge to invocation of the “state secrets” doctrine in the War on Terror is still pending. Still other cases will force the justices to determine when exigent circumstances can justify warrantless police searches and what, if any, requirements the due-process clause places on states to ensure that parents are not wrongfully listed on a child-abuse registry.

The newest justices’ commitment to stare decisis will be challenged in Bullcoming v. New Mexico, which revisits whether forensic evidence, in this case the results of a blood test in a drunk-driving case, is testimonial evidence subject to the requirements of the Sixth Amendment’s confrontation clause (“In all criminal prosecutions, the accused shall enjoy the right…to be confronted with the witnesses against him”). Only two years ago, the Court held that crime-lab reports may only be introduced if the lab technician who performed the work is available to testify, splitting 5–4 along non-ideological lines. However, two of the justices who joined Justice Scalia’s majority opinion — Justices Stevens and Souter — are no longer on the Court, and Justice Kennedy’s dissent made clear the dissenting justices would push for the Court to reverse course. This case could be their chance.

The justices are not done accepting cases, so more interesting issues could be added to the mix. Two pending cert petitions ask the Court to reenter the global-warming fray and consider the limitations on private and state-attorney-general tort suits alleging climate change constitutes a “public nuisance.” Several War on Terror and death-penalty cases could make their way up to the justices as well, and short supplies of the drugs used for lethal injection could force states to develop new execution protocols, triggering a wave of fast-tracked litigation challenging conventional approaches to capital punishment. Other high-profile questions, such as gay marriage, may have to wait until next term, if not later.

Throughout the term, the greatest attention will be paid to Justice Kagan, as her lack of judicial experience makes Court watchers keen to discern her judicial approach. Will she be a lockstep liberal like Justice Thurgood Marshall, for whom she clerked? Or will she reveal an independent streak? Will her time in the executive branch make her more sympathetic to government claims? Could that experience give her a soft spot for executive power? We won’t know until she’s had significant time on the Court. This term will only begin to provide us with answers.