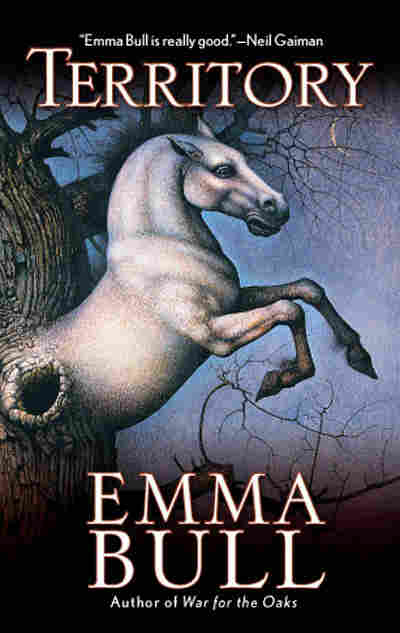 LANGUAGE ADVISORY: This excerpt includes language that some readers may find offensive.

The buckskin horse walked up Allen Street just before dawn. Its head was low, its dollar-gold hide was marked with drying sweat, and its black legs were caked with dust. The man on its back was slumped forward with his face in the tangled black mane. His hat was missing, showing hair as straight and black and disarranged as his mount's. A stain spread dark on the side and skirt of his brown canvas coat.

An ore wagon thundered by, murdering sleep for newcomers who weren't accustomed to the sound. A few drowsy, half-drunk miners trudged toward the shafts that rimmed the town, clutching their coats to keep out the cold spring air. Neither the miners nor the wagon driver so much as glanced at the man on the horse. A man slumped on a horse wasn't enough to make a baby stare in Tombstone.

The horse stopped uncertainly at the edge of the street, outside a building tricked out in turned porch posts, raised moldings, and gold paint. Yellow light glowed in its window and through the open double doors. The murmur of men's voices and the clank of glass against glass reached the street.

The buckskin seemed to expect the man to rouse himself, fling the reins around the hitching rail, and clatter across the boardwalk and through the doors. When nothing of the sort occurred, it stepped forward, once, twice. A fly bit it, and it flinched. At that, the rider slid out of the saddle like an unstrapped pack, and landed hard on his back in the dust.

A man peered out the door. His face was round, blunt-nosed, and topped with a pile of sandy-red cherub curls; a moustache, an imperial, and a scowl kept it from outright childishness. He was red-eyed with liquor and smoke. His shirt was wrinkled, and sweat made dark half circles under his arms.

"Hell. Some damned drunk fool fell off his God-damned horse." He stepped unsteadily to the edge of the boardwalk and frowned over the still figure. "Well, shit. Milt, Billy!" he called back over his shoulder. "Give me a hand!"

Chairs scraped inside, and Milt and Billy pushed out onto the walk. Milt, the older of the two, sent an arc of tobacco juice into the street. "Just because you can't play cards worth a fart doesn't mean you can break up the game."

"Help me haul this kid."

Billy, taller than the other two, bony at the joints like an adolescent wolf, looked down at the boy in the street. His eyes grew wide. "Jesus, Ike," he said with the suggestion of a squeak. Then he seemed to recollect himself; he settled his face into an awkward sneer. "Better him than me."

"Quit yammering and take his legs."

They picked up the boy and maneuvered through the doors. They slung him, not very gently, onto the surface of the table closest to the window, scattering the components of their interrupted poker game. The bartender, nodding behind a copy of yesterday's Epitaph, ignored them.

There was only one player still sitting at the game. When the three men dropped their untidy burden in front of him he sighed heavily. "I believe," he said, "I am being inconvenienced."

"Sorry -- Milt, go fetch Goodfellow -- but the doc'll want the light." Ike jerked his thumb at the lamp shining down over the table. "Fellow's been shot, don't you see."

The bartender looked up sharply over his newspaper. "By God, Ike, if he bleeds on that table, you'll clean it up."

The seated man raised a corner of the boy's coat and extracted a glass half full of whiskey from under it. He took a swallow. "Anyone you know?"

Billy answered. "He might be Sarey Diaz's brother, up from Cananea."

"Hell, no," replied Ike, chewing his moustache. "Seen him before, though. He was riding drag with Leonard and Crane on a herd going up to Chandler's ranch."

"Is he still alive?" asked the seated man.

Another heavy sigh; then the last of the whiskey went down his throat. "Yes, he would be."

Doc Holliday looked down at the wounded boy on top of his cards and tried to think of something else. He clutched at irritation over the spoiled game: now he'd never know if Milt Hicks had had anything when he raised the second time.

He wasn't drunk enough for dying boys, especially ones he wasn't responsible for. To have this one land in front of him -- if he signified what Doc suspected he did -- was a foul sort of practical joke.

The fever swelled in his skull, buzzed in his ears. His lungs were like hot lead bars inside his chest -- lead bars you could cough up a piece at a time. He ought to be in bed, not on display in the front window of the Oriental. Damn Morgan for a perfect empty-headed, God-forsaken idiot.

He was lucky it was Frank Leslie tending the Oriental's bar. Frank did what Wyatt told him to, and Doc, in Wyatt's absence, could sometimes pass for the voice of Wyatt. He'd bullied Frank into selling him a bottle.

And the cards were good, better than medicine. He'd rather play with clever players, but he'd settle for Ike and Billy Clanton and Milt Hicks. Doc loved the cool, relentless logic of the cards. They had no pity or fear or doubt; they fell as they fell, and anyone who regretted or begged them or raged at them was a fool. Sometimes he wished he could be part of the deck. A red jack, maybe, expressionless, with two heads and no ass.

Now here was this corpse, or soon-to-be corpse, reminding him that flesh was frail and plans were made to totter and fall.

At the corner of his eye, he saw someone step through the doors. Milt with the doctor. Goodfellow must have come in his nightshirt, Doc thought as he looked around. But it wasn't Dr. Goodfellow.

Doc could measure and judge a man or woman at a glance; any decent card dealer could. He might choose to fly in the face of his judgment, but he always took that measure. He didn't gamble.

The man who stood framed in the doorway could be read like a book printed in three languages, none of which Doc felt he properly knew. He straightened a little in his chair.

He wanted to know how the man's eyes moved, but the newcomer wore dark spectacles like a blind man, smoky green glass in gold wire frames. His wide-brimmed, low-crowned hat deserved better treatment than it had received of late. His hair, probably brown under the dust, hung in a plait to his shoulder blades, the way some Indians and a few of the Mexicans wore theirs. Doc guessed he'd been clean-shaven a week ago.

The nap was worn off his corduroy sack coat at the sleeve hems and elbows and collar; Doc was puzzled to make out its original color. The waistcoat underneath was missing a button, and there was no collar on his shirt. The buckle of a gunbelt showed at his open coat front.

The newcomer swept his hat off and moved to slap it against his thigh, then seemed to reconsider. Good; the dust would have choked them all. The man surveyed the room and its inhabitants, and spotted the unconscious boy.

"Oh. There he is." He moved toward the table. Doc expected him to take the spectacles off then, but he didn't. It was like looking into the blank dark eyes of a locust.

"If you're a friend of this gentleman's," Doc said, "I feel I should warn you that he has a God-damned large hole in him somewhere."

The newcomer laid two fingers to the boy's pulse just below the jaw. He frowned. "No, not a friend. Have you sent for the doctor?"