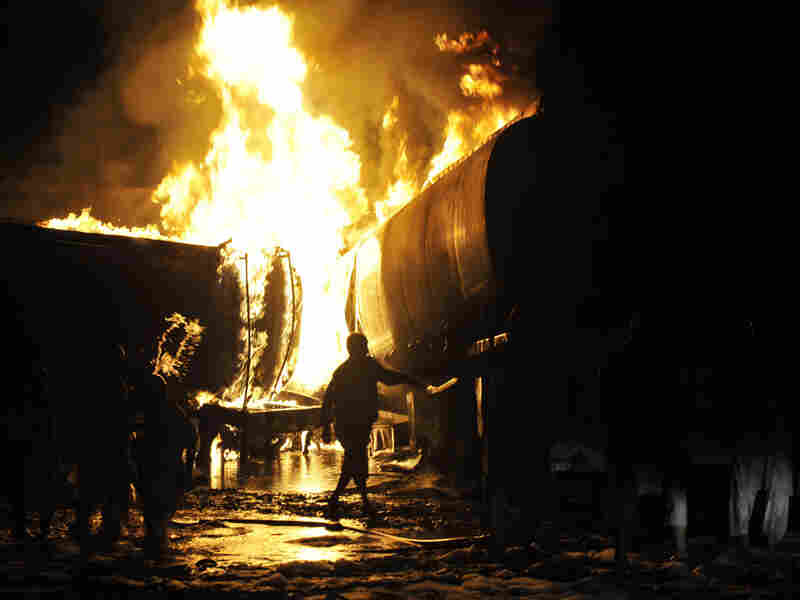 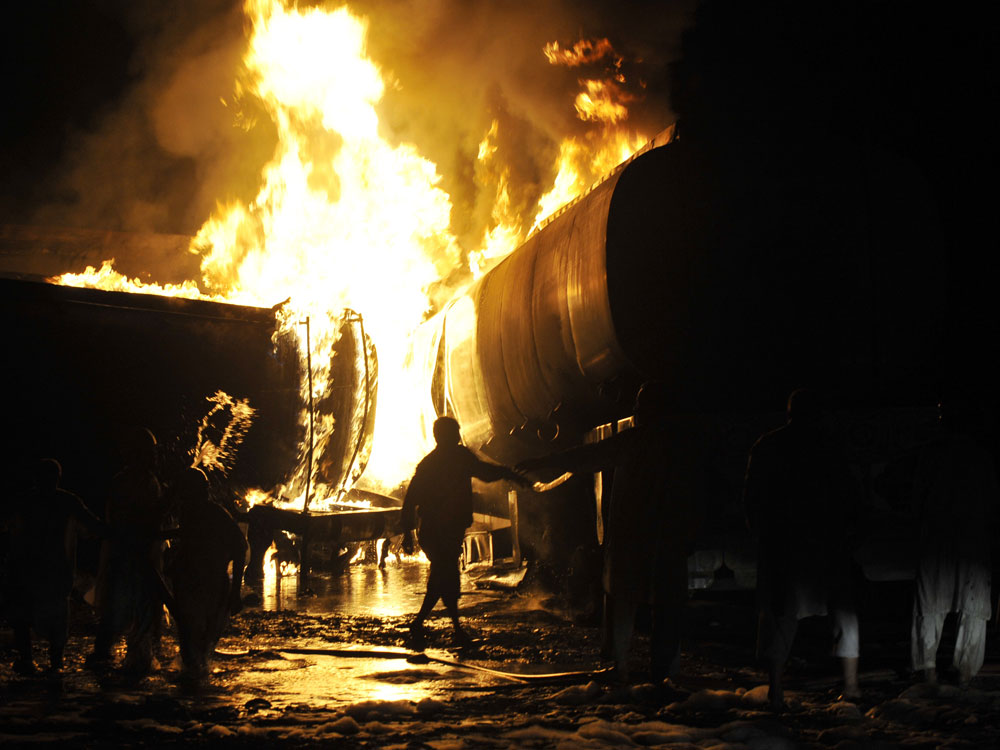 Pakistani firefighters try to put out fires on oil tanker trucks after militants attacked a NATO convoy near Islamabad. The attackers killed at least three people and set fire to 20 NATO oil tankers on Monday.

U.S. and NATO officials are hoping that a very public and contrite apology will help bring a quick end to an international incident that's keeping vital supplies from reaching NATO troops in Afghanistan.

The dispute -- which arose after a helicopter assault killed three Pakistani soldiers along the Afghan border last week -- revealed critical vulnerabilities in the NATO supply chain, a long-haul convoy route through Pakistan that involves government and military officials, trucking gangsters and Taliban militants.

In an effort to get the stalled supplies moving to Afghanistan, NATO's chief apologized Monday to Pakistan and promised that the alliance "will draw the right lessons" from the deadly cross-border attack. Secretary-General Anders Fogh Rasmussen also promised Pakistan's foreign minister that NATO would conduct an investigation into the assault.

Choppers Not Part Of The Deal

Pakistani officials have tolerated an increasing tempo of NATO drone attacks, including one on Monday that reportedly killed at least a half-dozen Islamist militants in Pakistan's North Waziristan region.

But Moeed Yusuf, South Asia adviser at the U.S. Institute of Peace, says last week's helicopter attacks were not part of the tacit agreements between Pakistani and Western officials; they prompted intense public criticism of the government in Pakistan, and required a high-profile rebuke.

"The supply routes are the trump card that Pakistan has," Yusuf says.  "The signal that was sent was, 'You cross our red lines, you'll suffer.' "

Pakistan sent that signal by closing the Torkham crossing, one of only two checkpoints where NATO supplies cross from Pakistan into Afghanistan.  The blockade created a logjam of trucks loaded with food, fuel and other necessities for NATO troops.

Some 80 percent of all NATO's noncombat supplies for Afghanistan pass through Pakistan, and the truck convoys are about as vulnerable to militant attacks as the wagon trains in old American cowboy movies.

On Monday morning, black smoke rose over a truck stop near Islamabad, the Pakistani capital.  Police say gunmen opened fire on parked fuel trucks, destroying four of them and damaging more than a dozen.

The Pakistani Taliban claimed responsibility for that attack, which killed at least three people.

So far, militants have attacked at least four NATO convoys. A Taliban spokesman said the gunmen would keep up their assaults until the entire NATO supply line has been shut down.

Everybody Must Get Paid

That would be a costly situation for the U.S.-led coalition in Afghanistan, which has relatively few other options.  An alliance spokesman in Kabul said the shutdown would force NATO to move more supplies through Russia and the Central Asian republics on Afghanistan's northern border.

But a prolonged shutdown could be even more costly for Pakistan, which derives a lot of revenue from the goods crossing its territory.

Yusuf says he was surprised that Pakistan took such a drastic step so quickly.  Pakistan has "a lot of under-the-radar dealings with the U.S. and NATO," he adds.

He says one reason for the hard push-back from Pakistan may have been that CIA Director Leon Panetta was in Pakistan last week, apparently pressing the government to accept even more aggressive action from NATO along the Afghan border.

Yusuf adds that he doesn't think the closure of the border is likely to last long, because it's not in the interest of either side to see the supply route fail.

There is another constituency that doesn't want to see supply lines blocked for long, and that's the Pashtun trucking mafia that reaps big profits in payoffs to see that the convoys reach their destinations.

C. Christine Fair, a professor at Georgetown University's Walsh School of Foreign Service, says gangsters control the supply route from the time goods are loaded at the seaport of Karachi until they cross the Afghan border.

"For these trucks to move as often as they do requires that everyone is getting paid," Fair says.

For now, she adds, "it's a cost-benefit calculation" for the gangsters.  "The mafia will benefit from this later, because they'll be able to charge more to keep the convoys secure."

But if Taliban attacks prove too costly to the mafia, Fair predicts, "there will be some dead Talibs at the end. This is not just in the [Pakistani] military's hands, nor the militants."