Accessibility links
School Offers Life Lessons To North Korean Defectors An unusual private school in central Seoul is trying to teach young North Korean defectors how to survive in the South. The problems suffered by its students adjusting to life in a democratic state offer a window into life in the totalitarian North. 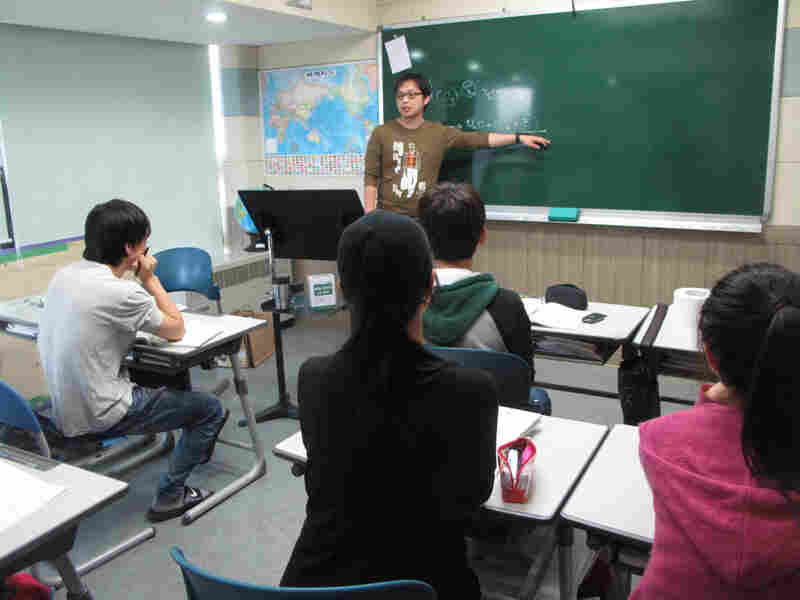 Young defectors from North Korea study at Yeomyung school in Seoul. They asked for their faces not to be shown to protect their families in North Korea, since relatives of those who have fled are sometimes punished by the authorities. Louisa Lim/NPR hide caption

In a nondescript building in central Seoul, an unusual private school is trying to teach young North Korean defectors how to survive in the South. The problems suffered by its students adjusting to life in a democratic state offer a window into life in the totalitarian North.

The first thing that is immediately noticeable at Yeomyung school is the disconnect between the age of the students -- mostly in their 20s -- and the simple subjects they're studying. In one classroom, two students are struggling to understand simple fractions, an elementary school subject.

Woo Kee-sup is the school's president.

"They missed many years of schooling because they [fled North Korea and were hiding] in a third country like China," he says. "And the education system in North Korea is basically demolished."

Formal education in North Korea is largely dedicated to extolling leader Kim Jong Il through songs and ideological classes, and even math problems may use political examples as teaching aids. Its aim: to teach obedience at all costs to maintain the regime, rather than teaching students how to think for themselves.

And for many, the economics of survival outweighed getting an education.

Student Chun Hyuk-kang is 24, but his formal education ended when he was 12, when he fled to China. "A lot of students stayed out of school looking for food, or doing business trading things," he says.

Even when he did go to school in North Korea, he says he didn't learn much. "Schooling in North Korea is free but there are scarcely any supplies, like pens and paper and erasers. We'd rub spit on the paper to cross out our mistakes," he says with a giggle, "but that would just make a hole in the paper."

About 60 young defectors study at Yeomyung, which opened six years ago. Some stay for months; others have years of learning to catch up on.

In 2009, 2,927 North Korean defectors arrived in South Korea, according to the South Korean Ministry of Unification. That number has doubled since 2005, when the ministry reported the arrival of nearly 1,400 defectors.

The most established school for defectors in South Korea is Hangyeore, a boarding school. But Woo, Yeomyung's president, believes that being in urban Seoul, where students have to commute to get to school, exposes them to everyday life and helps them adjust.

And these kids, schooled in blind obedience, have a lot of adjustments to make. 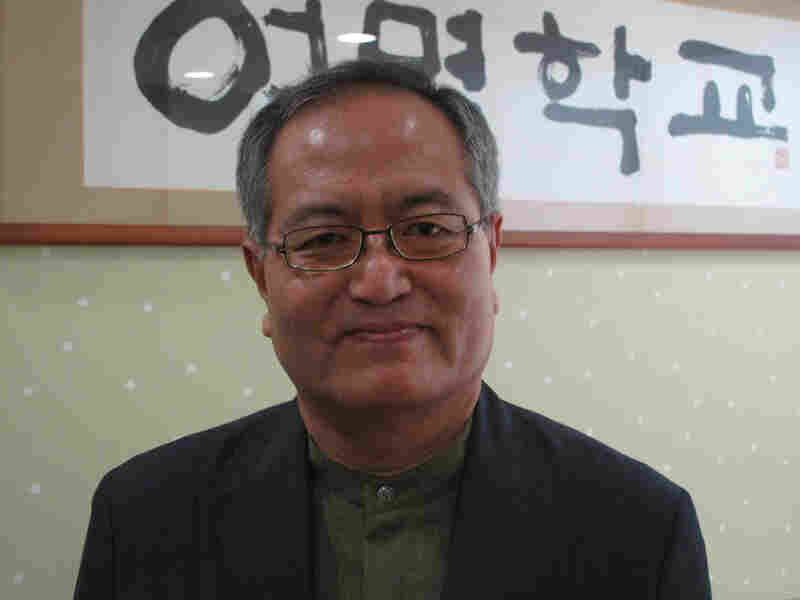 Former IT professional Woo Kup-see started Yeomyung six years ago. It's a small school, with only 57 graduates so far, but many of the students have to start learning at the primary education level, even though they're in their 20s. Louisa Lim/NPR hide caption

"They have never made decisions on their own," explains teacher Cho Myung-sook. "And they're not accustomed to situations where they must decide on their own."

'Their Human Nature Was Destroyed'

In drama class, clad in baggy jeans, students fool around, pretending to be robots.

But what may look like goofing off is actually therapy. These students are damaged, from years of hunger and the ever present fear of living in a society where neighbors inform on each other. Add to that the dangerous journey out of North Korea, which can take years living in conditions close to slavery.

As the students laugh and shriek, one girl is noticeable for her lack of participation. She sits alone, lost in thought, her expression bereft, a tissue in her hand. Young defectors suffer from shockingly high rates of depression.

"Ten percent of our students need medicating because they're seriously depressed," says Cho, the teacher. "More than 50 percent have been diagnosed as clinically depressed but don't need medication."

Young defectors often get teased in ordinary schools because of their northern accents and lack of education. Their ranks are swelling fast. So far this year, 500 defectors under age 19 have arrived in South Korea, double the number five years ago.

I had a dream of being a dancer, but that vanished when I learned my mother had defected to China. That meant I was stigmatized by the North Korean authorities. But now, after starting at this school, I want to be a nurse. That's why I say this school saved my life.

Cho has been working with young defectors for almost a decade. She believes their cognitive skills are getting worse, because of long-term food shortages. "These days I am seeing lower intelligence among students. It's to do with their brain growth being stunted, as they haven't been properly fed from infancy," Cho says. "Before, I'd explain the same thing 10 times before students would understand it. Now it takes 40 times. I think that's a tragedy."

This is the only private school for defectors accredited by Korea's Education Ministry. It's not cheap, with operating costs of more than $1 million a year.

Much of the funding comes from Christian churches, which pick up the tuition fees. All the teachers are Christian, and though Christianity is not in the curriculum, the president says he hopes the students will learn to become Christians.

Giving The Students Something To Live For

Park Yun-mi, 20, was already a believer when she began attending the school a year ago. She says the school has given her a dream, something to live for.

"I had a dream of being a dancer, but that vanished when I learned my mother had defected to China. That meant I was stigmatized by the North Korean authorities," Park says. "But now, after starting at this school, I want to be a nurse. That's why I say this school saved my life."

But even then, life isn't necessarily easy. The unemployment rate among defectors is more than four times higher than for ordinary South Koreans.

For those who have been through so much to get to South Korea, just getting by in this promised land is proving harder than they could have imagined.