Accessibility links
The Nation: Lebron's Charge Of Racism Rings True Lebron James's move from Cleveland angered many fans, as did his charge that racism was a factor in the city's anger toward him. But Dave Zirin of The Nation agrees. He argues that anger toward black sports figures is much higher than toward white stars who engage in similar scandals. 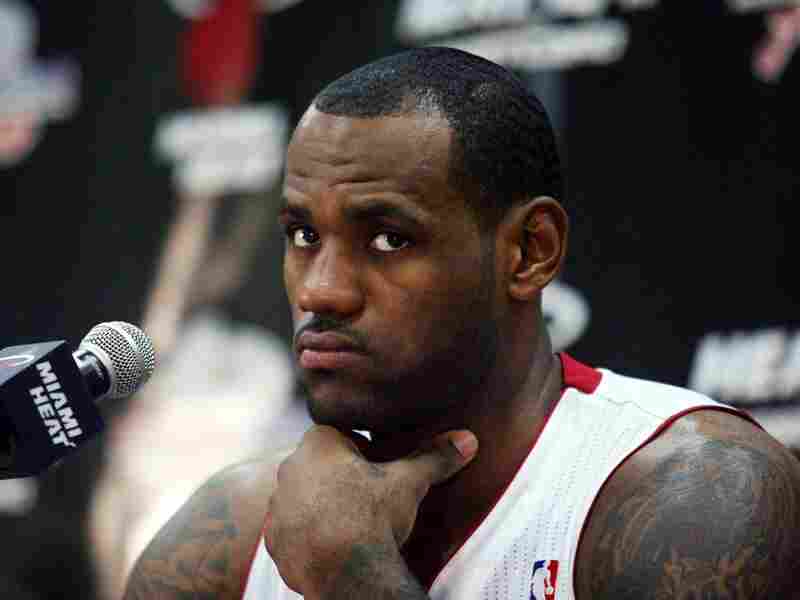 LeBron James of the Miami Heat poses for photos. James has said that he thinks the public backlash against his decision to leave the Cleveland Cavaliers was based in part on racism. Marc Serota/Getty Images hide caption

Dave Zirin is the sports editor for The Nation. He is the author of the forthcoming book, Bad Sports: How Owners Are Ruining the Games We Love.

You can't say Lebron James didn't warn us. Three years ago, the then-22-year-old James said he had two goals in his professional life: to be a "global icon like Muhammad Ali" and to become "the richest athlete in the world." This seemed like one whopper of a contradiction. Agree or disagree with his stances against war and racism, the fact is that Muhammad Ali remains a global icon because of what he sacrificed — professionally, personally, financially — in the name of political principle. To take such action in the world of sports, as Ali learned, is to make powerful enemies, and to make powerful enemies is not exactly the way to become Richie Rich.

The Ali way is to tell the truth as you see it, consequences be damned. Last week, Lebron dipped his pinky-toe into his Muhammad Ali persona during an interview with CNN's Soledad O'Brien and set the sportsworld on its ear. O'Brien asked Lebron about the fury he provoked when he left his hometown Cleveland Cavaliers this past summer. She wanted to know if he felt issues of race and racism might be connected to both the rage in Cleveland and the fact that Lebron has seen his popularity plummet, according to the advertising industry's annual Q-rating score.

Lebron answered, "I think so at times. It's always, you know, a race factor." That's all. Just twelve words where a 25-year-old athlete dared say that news footage of people burning his jersey in the streets of Cleveland might have something to do with racism, and even then, as he was careful to say, it was just a factor.

It's hardly Ali saying, "Damn America! Damn the white man's money!" But given the response, you would think that Lebron had changed his name to Farrakhan bin Laden. Sports Illustrated's Peter King, a self-described liberal, tweeted that Lebron's affirmation of racism was "garbage." Jason Whitlock, a man who says he "never leaves home without his race card" said, "Give me a &*%$ing break." He then, with his typical lyricism, praised America for "taking a dump on Lebron" (It's like Grantland Rice still walks among us!).

Charles Barkley also piled on, saying, "It's like watching a movie. Just when you think it couldn't get any stupider, it gets more stupid." The only thing getting "stupider" is how we discuss these issues in America and in the world of sports.

I was neither a fan of Lebron's move to Miami nor his egomaniacal ESPN infomercial, "The Decision," where he revealed that he would be "taking [his] talents to South Beach. But to say that racism doesn't shape our perceptions of controversial, narcissistic or outspoken athletes is to deny that the sky is blue or that most sportswriters could stand to bathe. Just look at the aforementioned Q ratings. The six least popular athletes in America are Michael Vick, Tiger Woods, Chad Ochocinco, Terrell Owens, Kobe Bryant and Lebron. Yes, Vick, Woods and Bryant have had their share of off-field scandal, but so has Ben Roethlisberger, Brett Favre, and even Tom Brady. To say that racism doesn't shape the volume of the anger at black athletes is to say that sports somehow exists in a magical, hermetically sealed universe where the sewage of our society never manages to seep.

It also shapes the near-lockstep hostility Lebron provoked from the sports media. There is a valuable lesson for the King to learn: if you really want to walk in the footsteps of Ali, especially in the age of 24-hour news media, Twitter and Whitlock, you had better develop a serious backbone. If your goal is to "be revolutionary," then going on ESPN the next day to complain that people are making such a big deal over your comments is like wearing red to a bullfight. You had better be prepared to handle the backlash, and like Ali, punch back.

If you really want to be the richest athlete on earth, then speaking about how race and racism affect your life is not exactly torn from the Michael Jordan playbook. But if you are going to "go there," you had better be able to take the heat. Whether or not the self-proclaimed King James can, or even if he wants to, is an open question. Right now Lebron is walking on the fence between being a rebel and just another creature of commercialism. The problem with walking that narrow fence though, is that eventually you slip. Then comes the pain.