Accessibility links
Toxic Mud Spill Kills 4 In Hungary Hungary declared a state of emergency in three counties Tuesday after a flood of toxic red sludge from an alumina plant engulfed several towns and burned people through their clothes. One official called it "an ecological disaster" that may threaten the Danube and other key rivers. 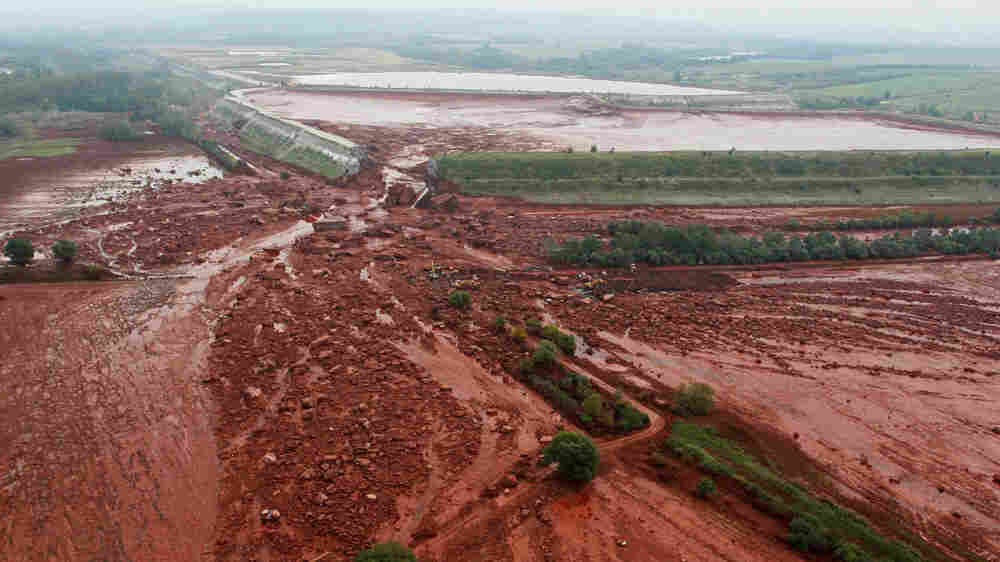 An aerial view of the broken dike, top center, of a reservoir containing red mud of an alumina factory near Ajka, about 100 miles southwest of Budapest, Hungary. Gyoergy Varga/AP hide caption

Hungary declared a state of emergency in three counties Tuesday after a flood of toxic red sludge from an alumina plant engulfed several towns and burned people through their clothes. One official called it "an ecological disaster" that may threaten the Danube and other key rivers.

The toll rose to four dead, six missing and at least 120 people injured after a retaining wall collapsed Monday at a sludge reservoir at the Ajkai Timfoldgyar plant in Ajka, a town 100 miles southwest of Budapest, the capital.

Hungarian Prime Minister Viktor Orban said Tuesday that human error -- not damage from flooding -- very likely caused the retaining wall to fail. He added that there was no threat of radiation from the contaminated sludge. 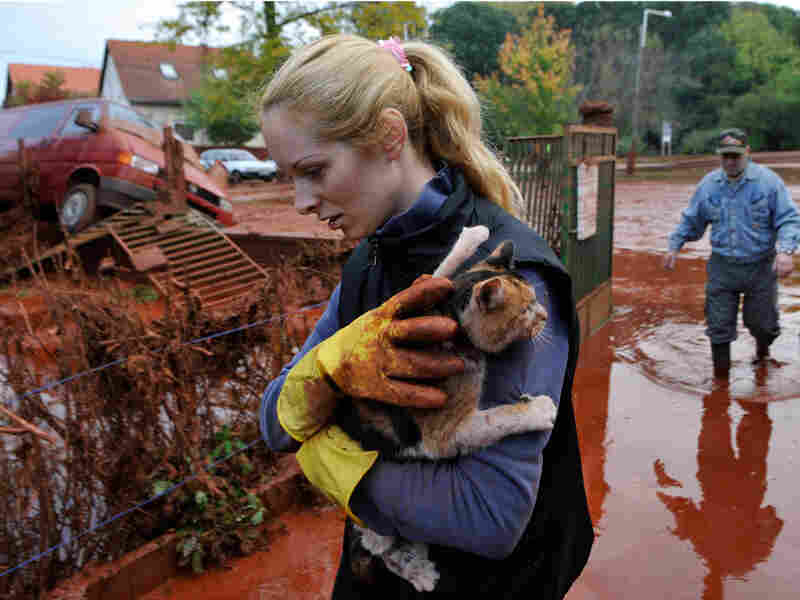 Tunde Erdelyi saves her cat while Janos Kis walks into their yard flooded by toxic mud in the town of Devecser. Bela Szandelszky/AP hide caption 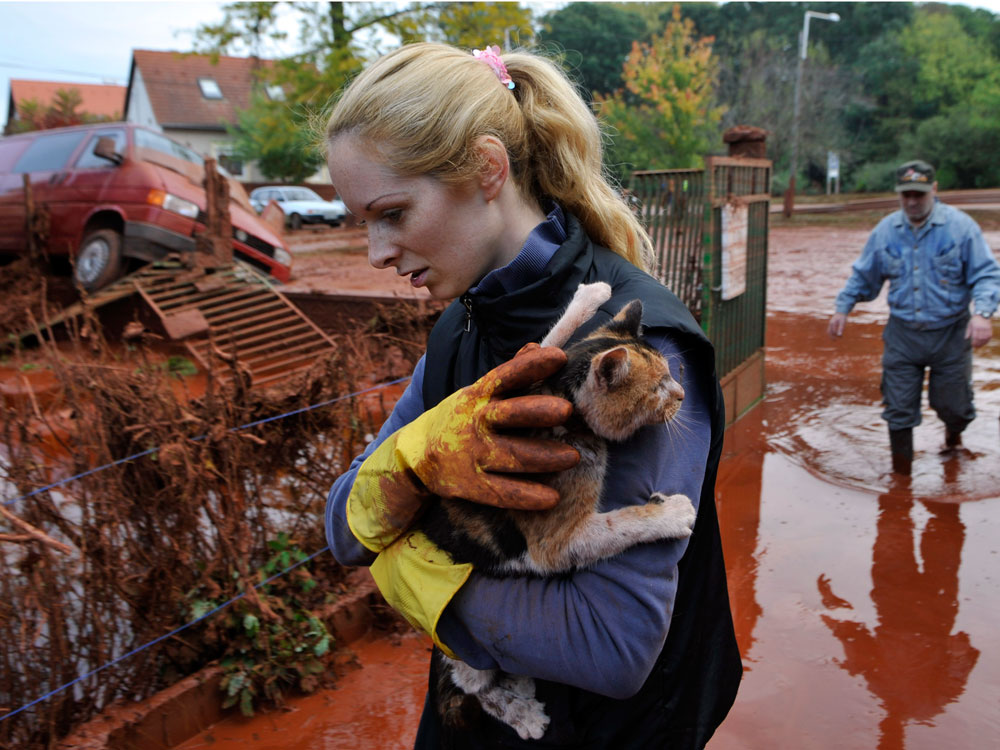 Tunde Erdelyi saves her cat while Janos Kis walks into their yard flooded by toxic mud in the town of Devecser.

But it is dangerous; residents have reported burns and eye irritation. The National Disaster Management Directorate said the sludge, a waste product in aluminum production, contains heavy metals, including lead, and that its dust can cause lung damage, including cancer. It is toxic if ingested.

The agency is pouring tons of plaster into the nearby Marcal River to try to contain the spill and prevent it from flowing on to the larger Danube River.

Illes called the flood an "ecological catastrophe" and said the sludge could reach the Raba and Danube rivers. He suspended activity at the plant and ordered the company to repair the damaged reservoir.

The disaster agency said 390 residents had to be temporarily relocated and 110 were rescued from the flooded towns, including Kolontal, Devecser and Somlovasarhely. Firefighters and soldiers swept through the region Tuesday carrying out cleanup tasks with bulldozers.

Dr. Attila Nyikos of the National Disaster Management Directorate said the victims -- two women, a young man and a 3-year-old child -- very likely drowned in the polluted sludge water. Many of the injured sustained burns as the sludge seeped through their clothes, and two faced life-threatening conditions.

The injured were being monitored because the chemical burns caused by the sludge could take days to emerge and what may seem like superficial injuries could later cause damage to deeper tissue, Dr. Peter Jakabos of Gyor hospital, where several of the injured were taken, told state television.

In Devecser, the sludge in Tunde Erdelyi's house was still 5 feet high Tuesday and rescue workers had to use an ax to cut through her living room door to let the red liquid flow out.

"When I heard the rumble of the flood, all the time I had was to jump out the window and run to higher ground," said a tearful Erdelyi, still shocked by the events but grateful that the family rabbit and cat were safe.

Robert Kis, Erdelyi's husband, said his uncle had been taken to Budapest by helicopter after the sludge "burned him to the bone." The toxic flood overturned Erdelyi's car and pushed it 30 yards to the back of the garden while her husband's van was lifted up onto a fence.

Erdelyi, a seamstress, was hoping the flood spared the shop in town where she worked, her family's main source of income.

In neighboring Kolontal, the town closest to the aluminum plant, 61-year old widow Erzsebet Veingartner was in her kitchen when the sludge flood hit Monday afternoon.

"I looked outside and all I saw was the stream swelling like a huge wave," said Veingartner, who lives on a monthly disability pension of $350. "Thank God I had the presence of mind to turn off the gas and run up to the attic."

Veingartner, devastated by her losses, looked out at her backyard still covered by some 3 yards of red sludge.

"I have a winter's worth of firewood in the basement and it's all useless now," she said. "I lost all my chickens, my ducks, my Rottweiler, and my potato patch. My late husband's tools and machinery were in the shed and it's all gone."

Local environmentalists say they have tried to call the government's attention to the risks of red sludge for years, pointing to a 2003 report in which they estimated the waste at 30 million tons.

"Accumulated during decades ... red sludge is, by volume, the largest amount of toxic waste in Hungary," the Clear Air Action Group said, adding that producing 1 ton of alumina resulted in 2 tons of toxic waste.

MAL Rt., the Hungarian Aluminum Production and Trade Co., which owns the Ajka plant, said that according to European Union standards, the red sludge was not considered toxic waste. The company also denied that it should have taken more precautions to shore up the reservoir.

"According to the current evaluation, company management could not have noticed the signs of the natural catastrophe nor done anything to prevent it even while carefully respecting technological procedures," MAL said in a statement.

NPR's Eric Westervelt contributed to this report, which contains material from The Associated Press