Accessibility links
Coming Out From Life Under 'Don't Ask, Don't Tell' Anthony Woods had two tours in Iraq under his belt, a Bronze Star Medal and a job offer at West Point. Then he outed himself to his commander, and everything changed. For Woods, being a closeted gay soldier under "don't ask, don't tell," was hard, but not being a soldier at all may be harder. 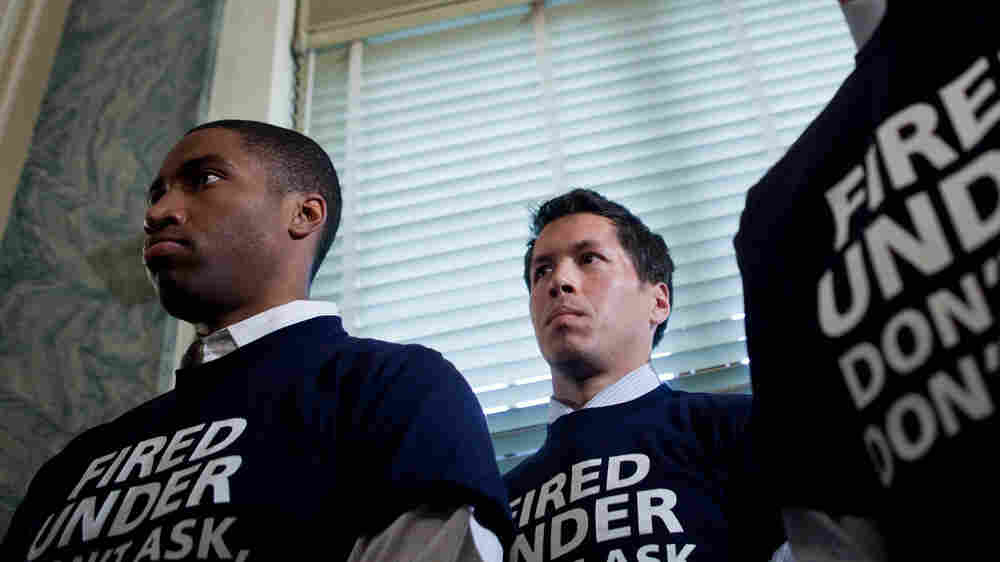 Anthony Woods joined the U.S. Army when he was 18, and for him, the whole thing just clicked.

Woods is one of the thousands of American service members who have been discharged for being gay since the "don't ask, don't tell" policy was put into place in 1993.

He now lives in Virginia, just a couple of miles from the Pentagon, in an apartment he shares with his boyfriend. Above his front door hangs a simple Christian cross. On the living room walls hang posters with British military slogans from World War II. One reads, "Freedom Is in Peril -- Defend It with All Your Might," and another, "Keep Calm and Carry On."

West Point graduate Anthony Woods planned to return to his alma mater to teach after receiving a master's degree from Harvard University. He was discharged from the U.S. Army after coming out to his commanding officer. Courtesy of Anthony Woods hide caption

Woods says that while he was sure about his career path, his sexuality was something far more confusing. He tried to date girls, but it never worked out. By the time he got to West Point for college, he knew.

"I recognized and I understood who I was. I knew I was different. I knew I was gay, and I knew the military didn't allow that. So I knew that would be a problem," Woods says.

Serving In The Closet

His solution was to just ignore it and bury himself in work. Ultimately that meant deploying to Iraq, first in 2004 and again in 2005. Woods says in many ways life there was easier.

"Because nobody asks you questions about why you're single when you're deployed. Because everyone's sort of single, you know. Everyone is away from their significant other. You're not being asked, 'Hey, let's go out to a bar.' Your friends aren't setting you up on a date," Woods says.

Woods refrained from having any romantic relationships when he was in the Army, which he found a major challenge of living under don't ask, don't tell.

"Some people make the choice of ... [being] secretive. ... They're going to try to hide a significant other. ... I was even more paranoid and said that ... I don't want to do anything to risk jeopardizing my career in the military," Woods says.

A cadet will not lie, cheat, steal, or tolerate those who do.

That changed when Woods got out from under the direct gaze of the military and went to graduate school. The Army offered to pay half of Woods' tuition at Harvard University. Under the terms of the grant, the student would have to pay back the tuition money if he or she was discharged from the military under don't ask, don't tell.

Woods' plan was to get a master's degree so he could then teach at his alma mater, West Point. But he started thinking about the school's strict honor code: "A cadet will not lie, cheat, steal, or tolerate those who do."

So he started coming out to friends and family. He started dating men. And he finally decided to tell his commanding officer, after much second-guessing.

"I second-guessed myself for six months. I mean, that was one of the most excruciating, agonizing decisions I have ever made in my entire life. Because I knew everything that I would be giving up," Woods says.

And he was right. The Army launched an investigation and ultimately discharged him. And that meant he would be forced to pay back to the Army $38,000 in tuition money.

Most of his friends in the military were supportive, but not all. One close friend -- Woods was a groomsman at his wedding -- accused Woods of lying on purpose, and he published his comments online.

Woods may be out of the Army, but he is still engaged in the debate about gays in the military. He has heard the public concerns of military and civilian groups that repealing don't ask, don't tell would erode unit cohesion and would be too disruptive especially during a time of war. He has also heard the concerns that some service members express in private.

After his discharge, Woods ran for U.S. Congress in California. He lost, but the experience whetted his appetite for politics. Now he's working for a community service nonprofit in Washington, D.C., and he collaborates with groups trying to repeal don't ask, don't tell.

Woods says that ultimately he's comfortable with his decision to come out.

He's just not in the military. And that, Woods says, is the hard part.

The audio version of this story incorrectly identified Anthony Woods’ rank in the U.S. Army as major. Woods was a captain.