Accessibility links
Somalia's Al-Shabab Spreads Its Message In Kenya Eastleigh, an area in Nairobi, Kenya, is home to tens of thousands of refugees from neighboring Somalia. Known as "Little Mogadishu," Eastleigh is becoming a new recruiting ground for al-Shabab, the militant group that aims to create a strict Islamist state in Somalia. 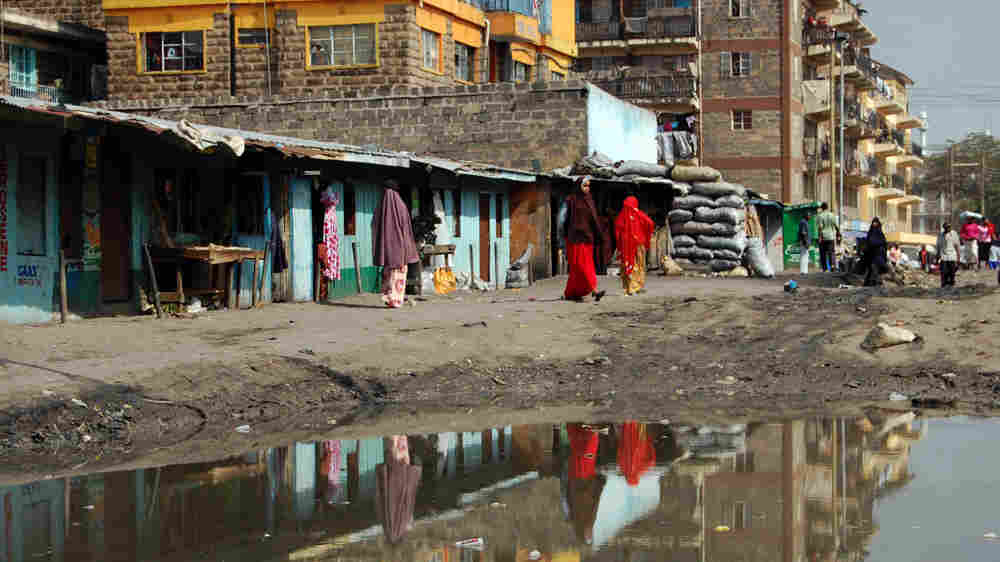 Eastleigh, an area in Nairobi, Kenya, is known as "Little Mogadishu." It's a Somali neighborhood of mud roads, open sewers and intrigue where the militant group al-Shabab is trying to recruit people to its efforts to create a strict Islamist state in Somalia. Frank Langfitt/NPR hide caption 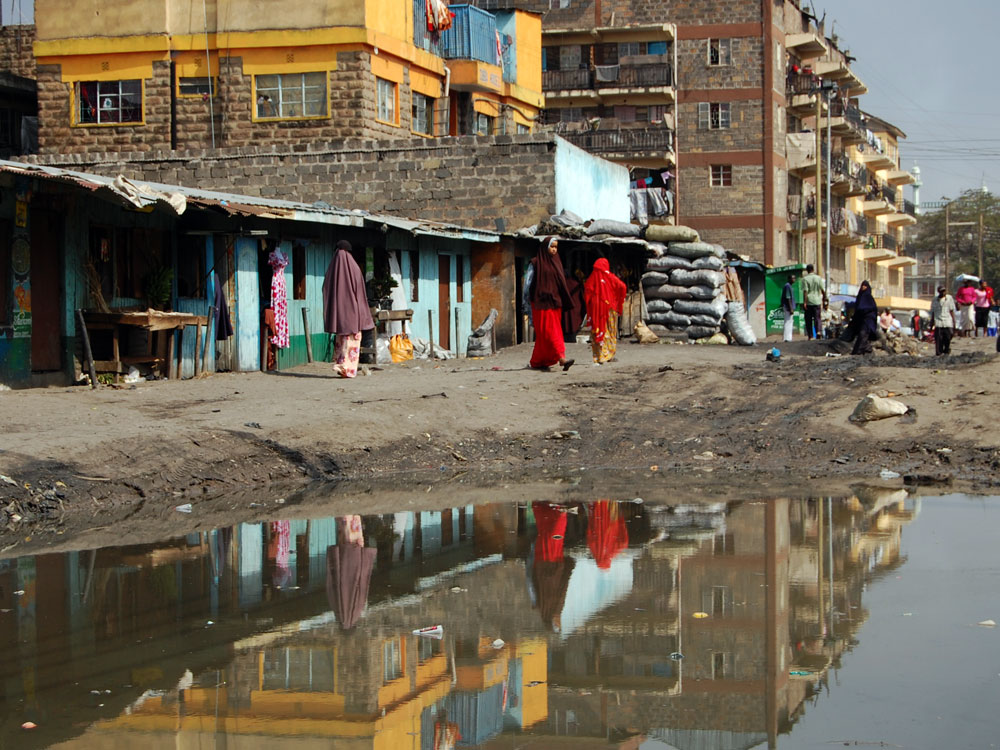 Eastleigh, an area in Nairobi, Kenya, is known as "Little Mogadishu." It's a Somali neighborhood of mud roads, open sewers and intrigue where the militant group al-Shabab is trying to recruit people to its efforts to create a strict Islamist state in Somalia.

It's a short drive from downtown Nairobi to the neighborhood of Eastleigh, but it seems a world away. Known as "Little Mogadishu," Eastleigh is home to tens of thousands of Somali refugees.

Somali music floats through the streets of this poor part of Kenya's capital. Women in headscarves sell khat, a leafy stimulant popular in Somalia, from garbage bags.

Residents say another aspect of Somali life is gaining ground as well: the radical ideology of al-Shabab.

"In the last five to six years, their influence has been growing more and more, day after day," says an imam surnamed Dini, who asked that his full name not be used because he feared for his safety.

Al-Shabab is a militant Islamist group that is trying to shoot and bomb its way to power in neighboring Somalia. The insurgents want to topple a weak, U.S.-backed government in the Somali capital, Mogadishu, and create a strict Islamist state. 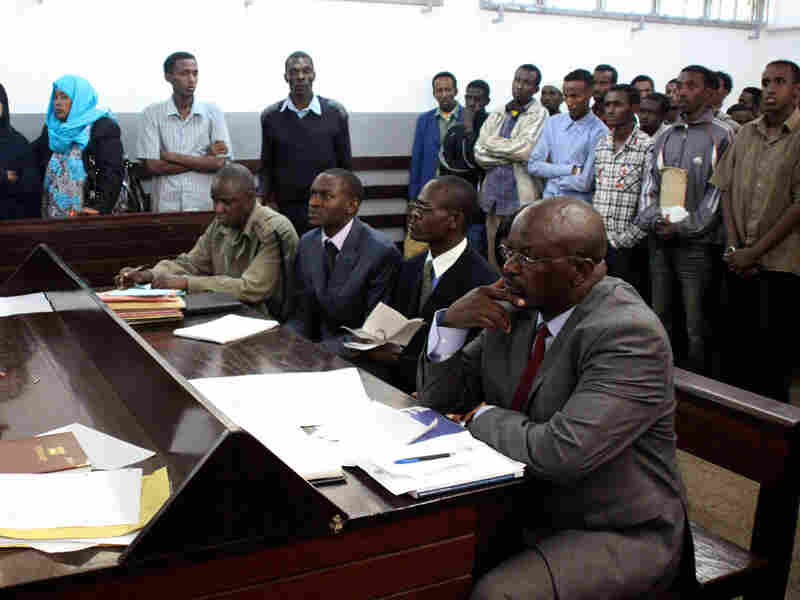 Arrested Somalis stand in a court in Kibera, Nairobi, in January. Kenyan police arrested about 400 people in a crackdown on suspected sympathizers of al-Shabab during protests in support of Jamaican-born Muslim cleric Abdullah al-Faisal. The Kenyan government expelled Faisal, who is on a global terrorist watch list and served four years in a British jail for inciting racial hatred. Sayyid Azim/AP hide caption 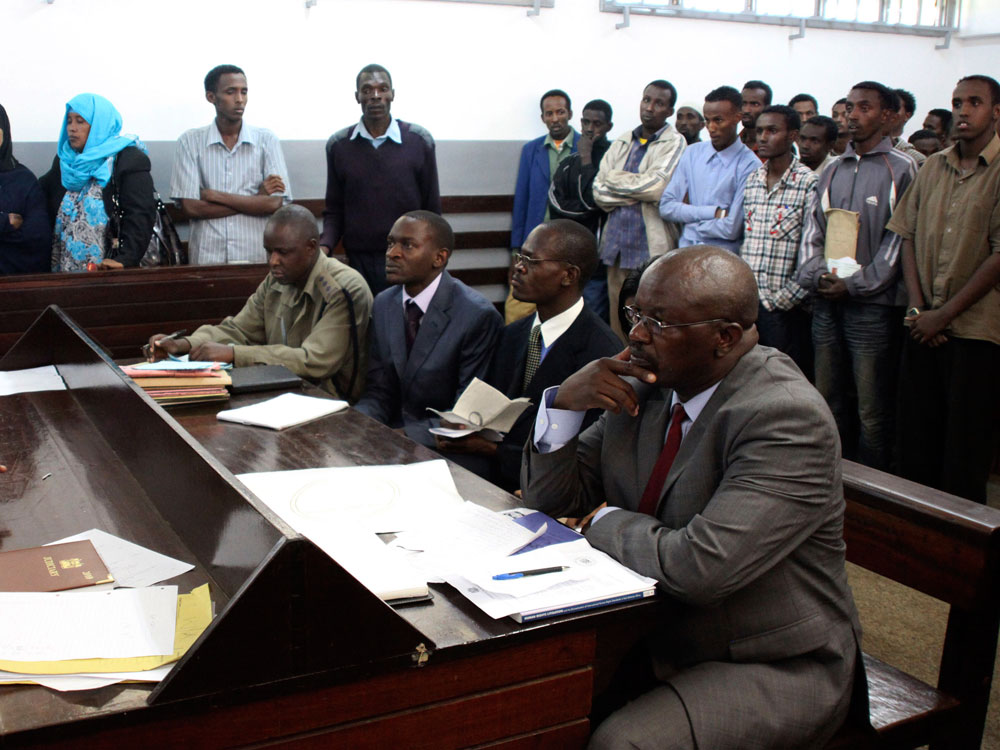 Arrested Somalis stand in a court in Kibera, Nairobi, in January. Kenyan police arrested about 400 people in a crackdown on suspected sympathizers of al-Shabab during protests in support of Jamaican-born Muslim cleric Abdullah al-Faisal. The Kenyan government expelled Faisal, who is on a global terrorist watch list and served four years in a British jail for inciting racial hatred.

But al-Shabab's ambitions don't end there. Residents in Eastleigh say it is making inroads in the neighborhood and spreading its violent ideology.

Dini, who is originally from Somalia, says al-Shabab has gained sway at two major mosques, where radical imams now encourage followers to return to Somalia and fight with the group.

"They use people for their political agenda," Dini says. "They pay people money -- we don't know where they get it -- they bring together children, women, people who are uneducated."

Dini spoke in an empty restaurant, which seemed a safe place to discuss a sensitive subject. Some workers arrived and began setting up the kitchen for dinner.

When an American reporter asked the imam if Americans should worry about al-Shabab, a restaurant worker slammed down a kitchen utensil in anger. Then, he came over to the table, scowling, and ordered the imam and the reporter to leave the restaurant.

Kenya is a democratic, majority Christian country and a strong ally of the United States.

Back in the safety of his moderate mosque, Dini explained that the restaurant is run by al-Shabab supporters.

Sheik Ibrahim Moalim Nor, who is also Somali, is another moderate imam. He spent three years teaching in Eastleigh. He says al-Shabab influences the lessons in many of the neighborhood's madrassas.

"They tell children to kill other Muslims, Christians and Jews," Nor says. "And they say if they kill them, Allah will grant them paradise."

Nor says he knows many of the teachers from their days back in Mogadishu. He says he tries to reason with them, but it's tough.

"I told them this is totally wrong," Nor says. "Last night, when I finished praying, I argued with a Shabab teacher for three hours. I was trying to tell him this ideology is totally bad. But he didn't listen to me. Three hours later, no agreement."

Al-Shabab controls most of south and central Somalia, and it's primarily focused on taking over Mogadishu. But the group has been willing to strike elsewhere. In July, it took credit for two bombings in Uganda, killing more than 70 people.

Support for al-Shabab remains largely behind closed doors in Nairobi, but sometimes it boils over in public.

Earlier this year, Somalis and Kenyan Muslims launched protests when the Kenyan government expelled a radical Muslim cleric who was visiting the country.

People in the crowds even waved the black flag shared by al-Shabab and al-Qaida.

"The intelligence we have, we know there are elements sympathetic to al-Shabab," said George Saitoti, head of Kenyan Internal Security. "And there may be some of them [al-Shabab operatives] around here."

Some people in Eastleigh are trying to fight back against al-Shabab.

But Hussein says competing with the group isn't easy. He says al-Shabab supporters recruit students for their schools with offers of money and free cell phones. Many Somali youth in Eastleigh are poor and alienated by a Kenyan society that looks down on them as troublesome refugees from a failed state.

"A lot of Somali parents who live here are worried their children will be taken to Somalia to fight for al-Shabab," Hussein says.

Even a Somali hip-hop band has weighed in against al-Shabab.

The group, Waayaha Cusub, which means "New Era" in Somali, has put out a rap song called "No to Al-Shabab."

The video features shots of the group singing outside a bombed-out building.

"We're looking for peace, love and unity ... al-Shabab killing every minute, every hour. It's got to stop."

The song is popular in Kenya and Somalia, but not, unsurprisingly, with al-Shabab.

After the song was released, al-Shabab supporters sent death threats to the band.